Few bands can claim to have achieved widespread success without a major label backing them, but indie stalwarts Crumb were able to break into the upper echelon of alternative music due to their ingenuity and carefully honed vision. The band bounced between Brooklyn and Boston for a few years, finding a sizable fanbase thanks to just two brief EPs. With the help of a handful of passionate friends, Crumb rose from the depths of the DIY scene, touting an ornate blend of technical jazz and breezy songwriting. By the time they finally released their full length debut, 2019’s Jinx, Crumb was already selling out venues across the U.S. and racking up millions of views on their intoxicating, ambitious music videos.

The psych pop quartet’s latest, Ice Melt, is one of their most impressive projects to date. It gallops between feels, but is tied together by alluring melodies and poetic lyricism. Golden instrumentals lay the framework for prose that finds surreality in the physical realm. Recorded in Los Angeles with the help of seasoned producer Jonathan Rado, Ice Melt is lush and engrossing. Closing your eyes and listening to the release is a transportive experience that evokes otherworldly wildlife and blossoming foliage.

We talked to the band about recording an album during the pandemic, staying independent in spite of their widespread success, and the sculptures behind the record’s mysterious visuals.

The first thing that struck me about the new record is that it feels a lot darker, a bit more mysterious than anything you’ve put out before. I’m wondering if that was intentional.

Lila Ramani: I haven’t heard that. That’s honestly surprising. To me, Jinx has more of an anxious energy, but maybe that’s lyrically. I do feel like Ice Melt has more vibes within it, more of a range of emotions. It’s less boxed into one feeling, so maybe that’s what you’re hearing. I don’t think that was really intentional, necessarily.

I read that the record is named after snow-melting ice that you can buy at a hardware store. I’m curious why you chose that name.

LR: That was just something I discovered late in life. Like, I’d never heard of the term “ice melt,” and then I just stumbled on this sign and I was like, “What does that mean?” Which is kind of embarrassing. That’s where it started, but ice melt came to me in a lot of things, one of which is kind of the idea of melting down or burning down chaos and dissolving it into the earth, which I feel like follows the narrative in the album for me. But I think there’s a lot of different ways you can interpret it.

Did the record come together over the pandemic? How did that impact making a record?

Bri Aronow: We recorded about eight songs in LA and then took a two month pause. We’d been working on the songs for a while. Some of them were demos that Lila made, some of them we had played on tour and workshopped for a while, over a couple years. It culminated in this first destination recording trip. We all met up in LA, which was different for us. We ended up working on it there for about five months in two different studios on two different sides from the initial shutdown of the pandemic.

“Ice melt came to me in a lot of things, one of which is kind of the idea of melting down or burning down chaos and dissolving it into the earth, which I feel like follows the narrative in the album for me. But I think there’s a lot of different ways you can interpret it.” —Lila Ramani

I know that Ice Melt came to life in Jonathan Rado’s studio. Was this your first time working with a producer of that caliber?

Jesse Brotter: Working with Rado was the coolest experience for a bunch of reasons, but we’ve always had a co-production relationship with people who we were working on our albums with. That kind of necessitates a pretty intimate relationship. Rado doesn’t see himself as a big-time producer, in that he doesn’t have a big ego with his production ideas. He’s a kid in a candy store: incredibly positive. Just, like, cheerleading. I’d personally been really into his music, both as a solo artist and his primary group Foxygen. It was a total dream to just get to exist in that musical world with him and become really close…along with Michael Harris, who was our engineer, who was incredible, and Rias Reed, who was an assistant engineer. We had this real pandemic lockdown family studio vibe happening.

Were you able to have any fun while you were out West, or was it all just recording and surviving a pandemic?

BA: I made a lot of soup. Y’know, you can have fun in your own way.

LR: We were sharing a rental car, me, Jesse, and Bri. Our only interactions would be, I would drop off the rental car and we would hang out for a few hours. One of them would drive me home and then drive back.

JB: Lila mentioned recently when talking about the album, the feeling of LA being a very shiny, beautiful place with a lot of promise, and also a feeling of wasteland energy or darkness there. It was really interesting to be living in a beautiful setting like Hollywood for months with the environment being a pandemic and so much social unrest. It was really strange, but it was all part of the bigger part of making this album happen.

LR: The song “LA” definitely speaks to that dynamic. I originally wrote it fantasizing about coming to LA and escaping New York. This fantasy I built around this ideal place, and then realizing that it’s kind of a hellscape. It has this dark energy under it. It’s not what it looks like on the outside, necessarily.

Jonathan Gilad: We have to wear a lot of hats at all times. You can’t just work on the music and only focus on that. Being proactive about visual decisions or business are some of the challenges that come along with that, but the reward is that we’re more in charge of everything that comes out from us.

I think what was nice about this release is that we did it in a really coordinated, thought-out way. We put out a single, a video, a double single, another music video. All of that made the whole thing feel like this album. It extracted it beyond the recordings we did in the studios because now I get to look at it through this outside lens. I feel like that captures the challenges and all the hard work. The reward is getting to look at this piece of art that’s presented in a polished way.

“It was really interesting to be living in a beautiful setting like Hollywood for months with the environment being a pandemic and so much social unrest. It was really strange, but it was all part of the bigger part of making this album happen.” — Jesse Brotter

Like all artists, I’m sure you’re bummed you couldn’t be on the road this past year. Do you have any fun stories or memories from touring that make you miss it or excited to get back out there?

JG: One of the best memories I have was from the Divino Niño and Shormey tour when we played at Saturn in Alabama. It was after being on the road with both bands for a long time and not having a place to unwind together. It turned into this wild evening where we all brought our instruments into this loft space and jammed endlessly and became wild in this animalistic way. There was a full moon, so maybe that had an effect. But that always stuck out as one of the purest nights from tour.

JB: They let you sleep up there, above the venue. Which is, like, the dream, to finish playing and go to sleep upstairs. And they decorated it with space age stuff.

JB: Everyone released their weird tour demons. It was cool. 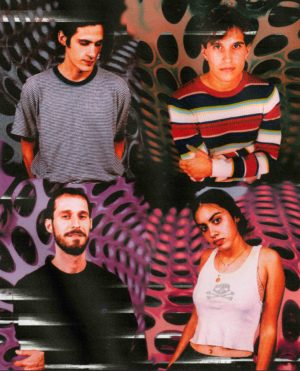 I’m curious what influences and inspirations you were drawing from when you were recording Ice Melt. Thematically, what shines through to you as a band?

LR: One of my intentions was to write less abstractly and more about physical things in my life, at least lyrically. Anything from chaotic relationships to colors to objects. Stuff like that. With this album specifically, I can point to more direct inspirations for the songs instead of just feelings.

Crumb clearly pulls from visuals in a lot of ways. Is that something you communicate before you make the music or after the fact?

JB: I feel like it’s all throughout. It feeds back into itself. Lila’s lyrics will spark a music video idea. There’s a lot of stuff that just ends up making sense after the fact and being full-circle conceptually.

LR: Working with Abe [El Makawy] was a super innovative process, to see him build these sculptures out of our vague ideas for the visuals. The album art itself, we started by picking out things from all of the lyrics on the album. We ended up with this idea of a strawberry without seeds. He built this structure that was like a seedless strawberry. He built it out of clay. He got it vacuum molded, and then he spray painted it so it was like this plastic thing. It was a crazy process to witness. It took so long and it ended up being this really abstract image.

BA: I think it’s cool that it ended up being this black-and-white universe, especially when the album itself feels like it’s so full of color. I think that’s gonna be cool for people to discover for themselves, however that interplay works. FL