If you grew up in the late ’80s and early ’90s, you grew up in a world where Bo Jackson, Wayne Gretzky, and Michael Jordan could have their own cartoon. Ken Griffey Jr. could play a non-threatening movie villain. Real-life expansion teams could be named after fictional children’s teams. In the post-Pete Rose, pre-steroid era, sports marketing was, if not more innocent, at least still trying to work within traditional forms. That includes the baseball card, which companies were cranking out like peanuts and Cracker Jacks well into the Clinton administration—by one estimate, as many as 81 billion cards per year were produced at the time. In the same way that you have dead skin cells drifting around your room as you read this, you probably have baseball cards tucked away around your house. You just don’t see them. 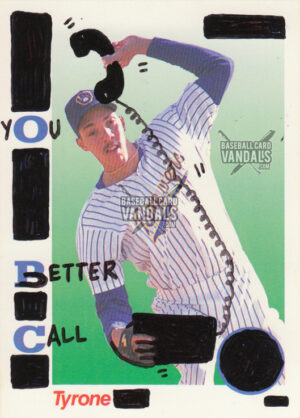 That may soon change thanks to Beau and Bryan Abbott, the LA-based brothers behind Baseball Card Vandals. What they do is simple, if horrifying to men in their sixties who still haven’t gotten over their parents ditching their own card collections: they scribble. They doodle. They deface. They remix old sports cards—the worthless “commons,” in the trade’s lingua franca—reshaping faces and bodies, rearranging words. The results are sometimes juvenile, often non sequitur, and almost always hilarious. And while they’re not above the occasional dick joke, they can also be dark and oddly moving.

On the occasion of the Major League All-Star Game, we hit up the Brothers Abbott via email to talk a little shop. We also made the questionable decision to hand over the reigns of our Instagram and Twitter accounts, where they’ll be posting a few brand-new cards and live-tweeting their thoughts about the action on the field. Let’s play ball!

How did you guys get started?

It’s hard to say, because we don’t really remember a time when we weren’t scribbling all over cards. We’re the youngest of four boys, and our older brothers collected baseball cards before us, so they were always around. Then we started collecting cards, and we were basically swimming in useless commons for about ten years of our childhood. We were both artists, too, so we always had plenty of markers. And, most importantly, we had a ton of unsupervised time on our hands after school, or on summer break, to entertain ourselves while we half-watched Saved by the Bell and Family Matters.

So you collected cards as kids?

For sure. We have a kind of weird relationship with baseball cards. On one hand, cards from the ’80s and ’90s are just the most pathetic things on earth, and for some reason we spent literally all of our allowance money on them for a long time. So we love to make fun of them, and we don’t feel any remorse for drawing all over Don Aase and Sammy Stewart cards. But on the other hand, we have a soft spot for the truly cool cards and players, l 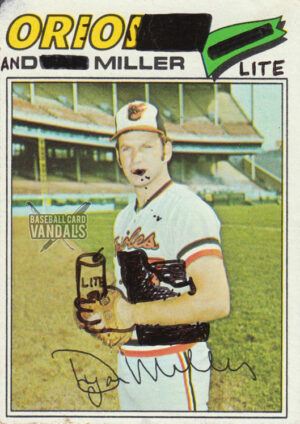 My dad’s generation always laments the fact that their parents threw away their cards. What do your parents think of this?

That’s because some of the cards from our parents’ generation are worth money. The vast majority (probably 95%) of cards from our generation, however, are worth whatever the price is for dirty old cardboard. I think that’s the story of baseball cards. They weren’t treated as collectibles in the ’50s and ’60s; they were more like toys. Cards from that era that are in decent condition are scarce, so they were worth money in the ’80s. But then, everyone in the ’80s thought their cards would be worth a ton of money in thirty years, so they kept them in pristine condition right out of the pack. Which means there’s a fucking ton of those cards in great condition, so they’re not scarce at all, and not worth anything. Until we draw dicks or panties on them. Sometimes both on the same card.

We still haven’t marked up any valuable cards yet. From our generation, there are only like ten cards that are worth anything, and we’re just too cowardly. Something deep inside tells us that marking up a Ken Griffey Jr. 1989 Upper Deck is just dumb. And the more pathetic and worthless the original card, the funnier the final product usually is. Our brand is nothing without the unfortunate bodies and faces of completely forgettable ’80’s middle relievers.

Do you ever hear from collectors who are upset with what you’re doing? 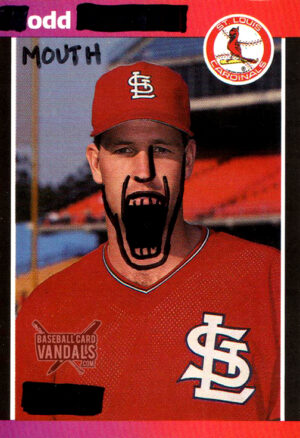 It’s shockingly rare. The overwhelming majority of our feedback is really positive and sweet. That’s one of the best parts about doing this. We’re honestly just trying to make people smile a couple of times a day, and that’s usually what happens. The Internet has been amazingly kind to us.

You always tag players and teams on Instagram. Have any contacted you?

C.J. Wilson and Josh Reddick are fans, which is really cool. Harold Reynolds is a huge fan. Dave Winfield made sure the Twitter universe knows that he is in no way affiliated with us. Lil’ Jon put us on his Instagram and Twitter. We’ve also gotten shoutouts from some hilarious Instagrammers that we love, like @adamscarpenters.

Well, we’re coming up on our two-thousandth published card, so it’s honestly really difficult to pick a favorite. Our favorites are usually the ones we just did, the newest dumb joke. But I can say that we have a special affinity for sad or embarrassing words next to confidently smiling players, or for cards that use the player’s action pose in a weird way.

Where do the cards come from?

We blew all our allowance money on cards when we were growing up, so we had quite a collection to start with. But as we’ve evol 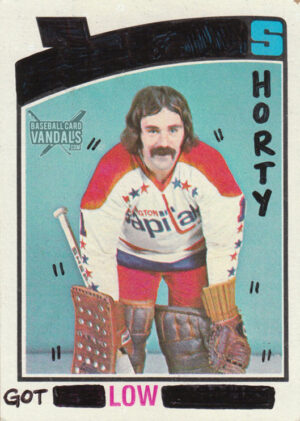 ved online, we’ve tried to diversify however we can. We’ll pick up cards at thrift stores, get random boxes off eBay, or our favorite—take donations from people who have no use for them.

Do you have a dream card, something you’ve been dying to do but can’t quite pull off?

Not really, because we literally have no idea what our next card will be. We never sit down with any ideas beforehand, they’re all generated by what’s on the card: the player’s facial expression, body position and most importantly, the words and letters on the card. That’s why we do so many cards with bizarre sentence structures, absurd statements, etc. They’re mostly determined by the order of the text that’s already on the card.

You’re from St. Louis, a place known for taking its baseball seriously. Have you heard from anyone back home about this? Are you concerned about whether vandalizing baseball cards is in line with The Cardinal Way?

Yeah, we’ve gotten nothing but love from our hometown. They give us nothing but curtain calls and standing ovations.

Do you ever worry that you’ll run out of ideas?

No. We’ll run out of cards before then. FL