“Timeline” is out September 18 on Circle Star Records, a new imprint of Stones Throw
Menu

“Timeline” is out September 18 on Circle Star Records, a new imprint of Stones Throw

Alexander Brettin is a transplant from the Midwest to LA, but he’s also somewhat of a transplant in state of mind. Like Ariel Pink, Brettin exists within a realm of hazy analog hiss where the melodies are strong and catchy, but the performances and arrangements remain unpredictable and otherworldly.

Pink comparisons are apt here, as the preeminent freak-pop maestro happens to be featured on the closing track from Timeline, Brettin’s upcoming debut as Mild High Club. Ahead of that release in September, you can hear the track “Undeniable”—which is an infectious slice of home-recorded charm and strangeness. And it’s subtle, but man, oh man, don’t miss that piano solo in the middle… It’s like George Martin stepping in to play a part on a Captain Beefhart track.

Mild High Club, who tour with a revolving cast of “club members” and refer to shows as “club meetings,” will be playing an upcoming series of dates opening for King Gizzard and The Lizard Wizard—appropriate considering that they also operate as a sort of cultish group of rotating players. North American dates for that, as well as the Timeline album cover and track listing, are below. 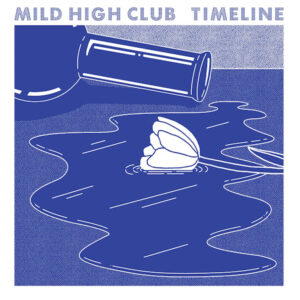 # = with King Gizzard and the Lizard Wizard

Timeline is out September 18 on Circle Star Records.