Timmy Vulgar is a longtime Detroit scene legend, having played with Epileptix and Clone Defects in the late ’90s. He’s played with a bunch of other bands you haven’t heard of unless you, too, have been a fixture in the Motor City’s underground since Jack White was upholstering furniture, but if you’ve been subject to Tyvek’s relentless pound, or The White Stripes at their most primal, then you know something of the sound that birthed Vulgar’s latest project, Timmy’s Organism.

“Weather Woman,” which we’re excited to be premiering today, is taken from Heartless Heathen, which is being put out by White’s Third Man Records. That he’d find a lot to like here isn’t at all surprising. The Detroit factory stamp is definitely visible—the guitar sounds are so thick you feel like you could hold on to one like a tube—and the clap-along rhythm of the verse and the fling of piano that sprints across the chorus almost come across like garage parody. But then there’s Vulgar’s voice, drawn with a slight tremble from the same depths that brought you Sabbath-era Ozzy Osbourne. The whole thing teeters on the edge of false spooky, but like The Cramps before them, Timmy’s Organism know how to play this game.

You can check out “Weather Woman” below, along with Heartless Heathen‘s artwork and track list. Vulgar will also be taking his band on a cross-country trek beginning next week; those dates are below, too. 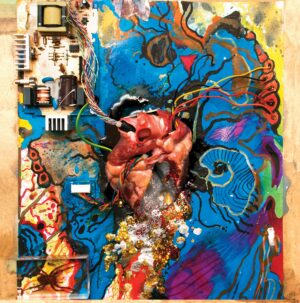