In Harmony, Octaves Apart: What’s Next for FFS?

Franz Ferdinand and Sparks’s collaborative project was one of 2015’s most fruitful partnerships. So where do the two groups—who are happy to consider FFS a band in its own right—go from here?
Menu

In Harmony, Octaves Apart: What’s Next for FFS?

Franz Ferdinand and Sparks’s collaborative project was one of 2015’s most fruitful partnerships. So where do the two groups—who are happy to consider FFS a band in its own right—go from here?

Sitting in a changing room beneath the stage at Oakland’s Fox Theater, Franz Ferdinand frontman Alex Kapranos is hesitant to the answer the question posed to him. Two years ago, a chance meeting on a street corner across the bay formally began a transatlantic partnership between his own Glaswegian band and LA’s Sparks. The hybrid sextet FFS has disproven its tongue-in-cheek song “Collaborations Don’t Work” with a critically praised album and a lengthy tour that would conclude that night with hugs and tears. But below the stage, before the show, Kapranos is demure when he is asked: do collaborations endure?

The following week, in an early morning phone call from his home, Sparks’ sixty-seven-year-old vocalist Russell Mael says that he and his brother, seventy-year-old keyboardist Ronald, are workaholics and like to stay productive. After so much time on the road, the Maels are ready to get back to making music, as opposed to performing it. But Mael won’t commit to a second FFS album. Both bands have to see where their priorities lie.

“We’re happy about how successful it was—this was a really unique and special situation that connected with a lot of people around the world,” Mael says. “We spent a really good chunk of our past two years completely immersed and focused on FFS, and we feel it made the project that much stronger.”

In other words, the correct assertion is not that collaborations work or that they endure, as if whether they succeed or fail were some natural process. The correct assertion is that they require a lot of effort. While both bands say that writing and recording together came easily, their dedication is what keeps FFS from the dreaded “side project” label.

“The implication of something being a side project has the connotation that you put less care into it, that it’s more throw-away,” Mael says. “Both bands really dedicated themselves to this for the past few years to ensure that it wasn’t a gimmick.”

Neither Sparks nor Franz Ferdinand is sure what to call their partnership other than a band, one that is now officially on hiatus. 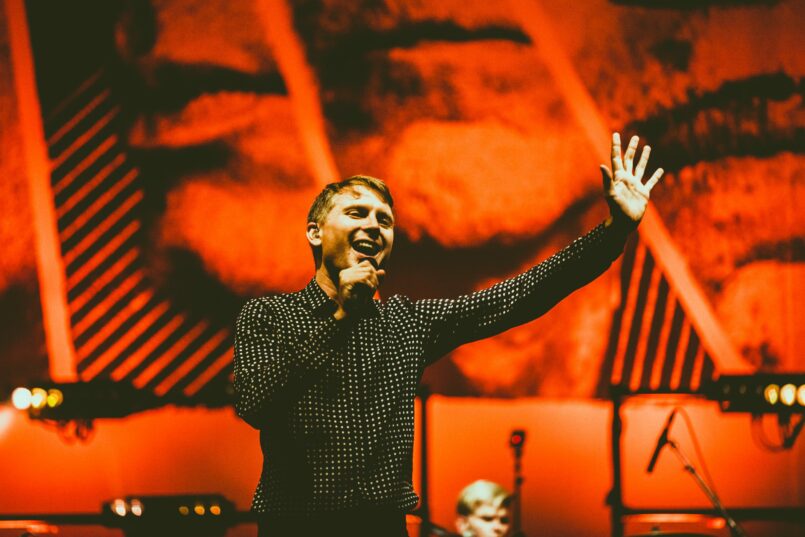 Alex Kapranos at The Wiltern in LA / photo by Rozette Rago

Sparks have been on Kapranos’ radar since he was in his early twenties, when 1974 single “Amateur Hour” made it into one of his many flea market vinyl purchases. Sparks’ intelligent, often acerbic songwriting style and their theatrical performance ethic were early influences on Kapranos and Franz Ferdinand.

Across more than twenty records since 1971—during which the band reinvented itself numerous times, from guitar rock to synth-pop and electronica in their partnership with Giorgio Moroder—Russell’s hyper frontman persona and Ron’s statuesque scowl set the standard for art-pop in the ’70s and influenced everything that came after. Franz Ferdinand, meanwhile, is often credited with reinvigorating the genre. In the early aughts, the quartet would hand out headwear to audience members and perform a song about the WWI-era archduke-assassinating Gavrilo Princip.

The Maels first heard Franz’s “Take Me Out” on the radio in 2004 and, curious, looked up the band and found an interview in which Kapranos listed Sparks as one of his biggest influences. So they called up him up with an idea. They had written a song they thought would be perfect for Franz Ferdinand: “Piss Off.” The bands talked about it briefly and expanded on the idea, thinking that the up-and-comers would write a song or two for Sparks to record as well.

“We’re always looking to do something challenging and unexpected and, hopefully, musically provocative in some sort of way,” Mael says. “We’ve had twenty-three albums prior to [FFS], and we’re always trying to place ourselves in a context that’s unexpected for fans of the band. 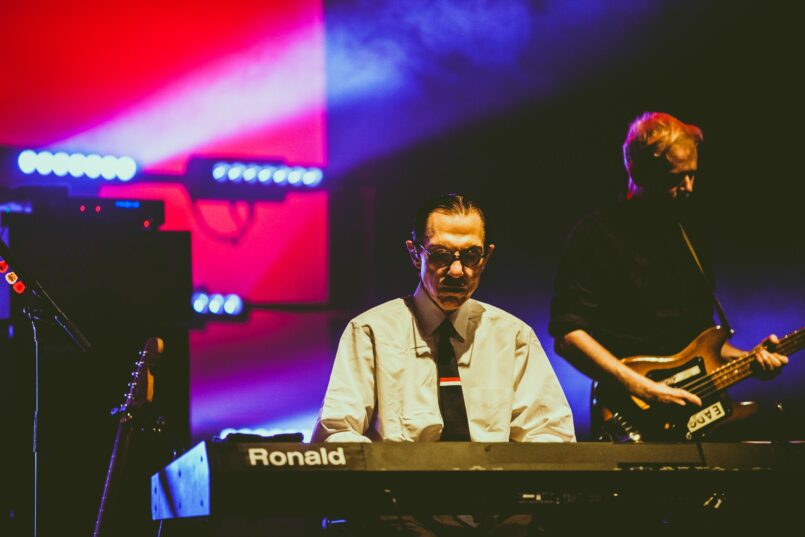 Ronald Mael at The Wiltern in LA / photo by Rozette Rago

Nothing came from those early talks, however. Franz Ferdinand’s trajectory sent them soaring, and existing commitments left no time for extracurricular activities. Until nine years later, that is, in 2013. Both bands found themselves in San Francisco on the same day in April. Sparks had a gig at the less-than-five-hundred-capacity Chapel while Franz Ferdinand had a small secret show planned the following day in the sweaty basement of a clothing boutique.

But foremost on Kapranos’ mind was repairing a molar broken in Uruguay. Acting on the advice of the band’s manager, he went out on foot searching for a dentist who counted Huey Lewis among his clients. Following handwritten directions, Kapranos promptly got lost.

“It was purely coincidence,” Kapranos said. “I couldn’t find the dentist, and I turned around and [Ron and Russell] were there.” Russell’s girlfriend, Emmi, had spotted Kapranos, and the Maels followed the figure for a block trying to ascertain his true identity. “So we went down to their gig,” Kapranos said, “and we did that thing [musicians] do: ‘Hey, you know, we should work together.’”

“We’re always looking to do something challenging and unexpected and musically provocative in some sort of way.” — Russell Mael

There was still no end-goal in mind, just an agreement for each band to write some music and lyrics, send them to each other, and have the other band complete them. Kapranos and guitarist Nick McCarthy wrote the music to “Police Encounters,” while the Maels countered with an early draft of “Collaborations Don’t Work,” which through much collaboration (naturally) turned into a nearly seven-minute rock opera that set the compositional tone for Russell Mael and Kapranos.

The two groups never shared the same room during the songwriting process. The Maels wrote in Los Angeles and Franz Ferdinand in Glasgow. The songs would bounce back and forth by e-mail. When a song sounded like it belonged to neither band, they knew they were on the right track. “Eventually we had so many [songs] to choose from, we said, ‘Well, why don’t we make a whole record?’” Franz bassist Bob Hardy says.

Recording, too, came easily, in part because the two bands in their usual configuration share no principle instruments. Ron’s keys could easily be incorporated into Franz’s rhythm section—Hardy and drummer Paul Thomson—while McCarthy would handle all of the guitars. The only redundancy was the two vocalists. Rather than fight about who would sing which line, the group used Mael’s falsetto and Kapranos’ deeper range as a new set of sonic tools. With no pre-made plan of how they would divide lines, Kapranos and Mael ended up sometimes singing in unison, though octaves apart.

“If you play a line on a piano and a guitar in unison, you have this strange combination of sound,” Kapranos says, back in Oakland. “Guys like Brian Wilson, that’s how they approached arranging; ‘I want to make a new sound and I’m going to do that by combining two existing sounds together.’ You can take that approach with vocals as well.” 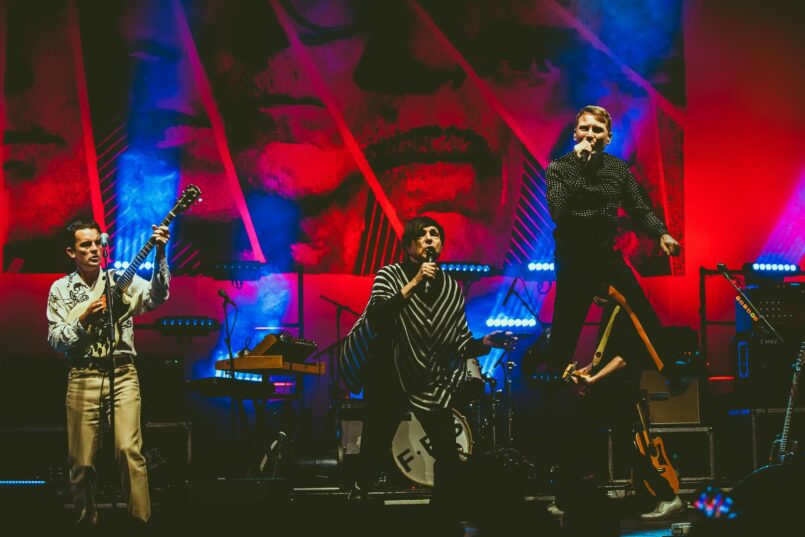 FFS at The Wiltern in LA / photo by Rozette Rago

With FFS being released on Domino in June, the six members hoped to turn their collective audiences’ attention toward one another, as well as upon the fruits of their collective labors. Both bands were looking forward to drawing attention to the seminal work of Sparks, whom Hardy and Kapranos say are better known in the UK. “They’re a band that have never had the reappraisal that they deserved,” Kapranos says. “I think that Talking Heads are a great example. In the early-to-mid-2000s people went back and reappraised their back catalogue, and they achieved the stature that they deserved. In North America, I felt that not enough people knew who [Sparks] were.”

“I think a lot of people assume that they were a British band, because their first success was there, and they have very British sensibilities about them,” Hardy adds. “Playing shows in the UK, you can really sense the warmth that audiences have toward them. We played Manchester, and it was just incredible. The cheering just got louder and louder. It was hairs-on-the-back-of-your-neck kind of stuff.”

The echoes of those cheers have long since faded at the Fox in Oakland, but there are still a handful of songs written by the Sparks guys that await Franz Ferdinand in Glasgow. Whether they’ll end up on another FFS recording is unknown even to the band. Kapranos recommends fans take the wait-and-see approach.

“I’m sure you will [hear them eventually],” Russell Mael says in LA. “They’ll surface in one form. They’re good songs. We have something to get recorded.” FL