BACKSTORY: A new vegan restaurant from Moby, a man with a taste for good food (and tea) and a desire to create a nurturing community
WHERE: Silver Lake, Los Angeles
YOU MIGHT KNOW IT AS: Moby’s second health-conscious, carefully designed eatery, following Teany in New York
NOW: The next vegan hot spot of Los Angeles

Moby will be the first to tell you: once upon a time, it was hard out there for a plant eater.

The electronic maestro, architecture hound, photography nut, and animal rights advocate recalls touring in the early ’90s, particularly in one rough stretch from Los Angeles to Austin, when his only option as a vegan was to subsist on gas station nuts. 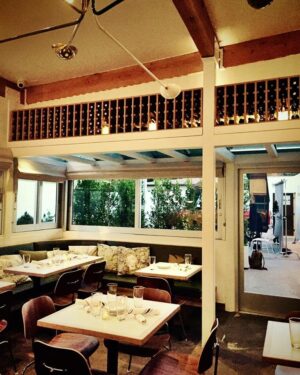 “We got to Texas after a twenty-six-hour drive, and I was almost shaking with hunger and exhaustion,” he says. “I walked into our hotel and asked the concierge if there was anywhere nearby to get healthy food. He said, ‘Oh, there’s a local company called Whole Foods that’s a block away.’ I walked into Whole Foods and I felt like I had stumbled into heaven after a day of being in a van. So I bought tons of healthy food and brought it back to my hotel. The next day I called my business manager and said, ‘There’s this company in Austin called Whole Foods—is it publicly traded?’ And he said, ‘As a matter of fact, they just publicly listed. Would you like to buy some of it?’” (He did.)

It’s that ethos of fresh, simple, and readily available food that the musician has brought into his second career as a vegan restaurant owner—first with New York tea and lunch joint Teany (which, he notes with a touch of irony, is often mistaken for the meat-heavy sandwich joint Tiny’s, located just down the street), and now with Little Pine, his Los Angeles eatery scheduled to open November 19. The goal? To make the Silver Lake restaurant an inviting dining destination that just happens to be meat and dairy free.

Despite a common misconception about vegan dining, Moby asserts that removing animal products from a menu is easier than some would believe. “Oftentimes, when I go out to dinner with my friends at normal-people restaurants, half of what they order will end up being vegan or vegan adjacent without them even being aware of it,” he notes. “They’ll have a salad, and some soup, and a pasta dish. All those things, at their core, are basically vegan.”

A committed vegan for the past twenty-eight years, Moby says educating people about the benefits of the dietary choice is more than a passion—it’s his life’s work. But don’t expect to be hit with any motivational slogans or propaganda inside his new establishment. At the end of the day, Little Pine is just another place to grab a delicious meal.

“It’s almost a very expedient, lazy way of satisfying a lot of my different interests.”

“It’s almost a very expedient, lazy way of satisfying a lot of my different interests,” he says of owning a restaurant. “One interest is veganism and organic food. Another interest is architecture and design. Another interest is community. It’s basically being able to indulge all these different interests in one entity. If someone’s interest is to make a lot of money or get rich, the last thing they should consider doing is opening an organic vegan restaurant. But then I thought to myself, ‘It would be nice if the restaurant breaks even, it would be nice if the restaurant makes money. But it’s more important to me that it really happily and successfully satisfies all the other criteria.’” FL