The Magic of Realism: On Álvaro Enrigue’s “Sudden Death”

Álvaro Enrigue’s recent novel Sudden Death has shown up on almost every “novels-to-look-out-for” list in 2016. This despite the fact that it was hyped as a “novel of ideas” and that it centers on a late-sixteenth-century proto-tennis match between the artist Caravaggio and the poet Quevedo, which match might conceivably have utilized a tennis ball made from the hair of Anne Boleyn. In addition to the detailed account of this sporting match, Enrigue’s novel also contains heavy helpings of art criticism, philosophical reflections, speculative historical accounts, and a plot that is, at best, very hard to find. I don’t know about you, but that sounds to me like something from which no good can come. It sounds, in fact, like a game of tennis: dull, pretentious, and stressful.

The first hundred pages of the novel, in which nondescript characters clamber onto the scene in relation to an all-caps collection of historical events (THE COUNTER-REFORMATION, THE CONQUEST OF MEXICO, GLOBALIZATION) and aesthetic dichotomies (REALISM v. ARTIFICE, BODY v. SPIRIT, ART v. LIFE) did nothing to assuage those anxieties. But the benefit of a novel of ideas is that the ideas can serve as an engine even when the novel itself stalls out, and by the end, Sudden Death justifies the praise. 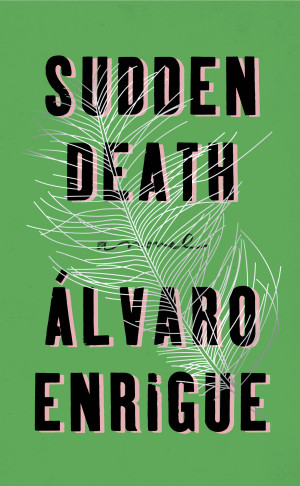 Caravaggio and Quevedo both appear first as big names and only much later accrue the shading that we normally associate with characters. They are engaged in this metaphorical combat over a dispute from the night before, but neither combatant seems entirely clear on what that night entailed at the point when the match begins. (This is, in other words, The Hangover via Tristram Shandy.) The players are attended by figures of similar world-historical stature, and the match spectators are culled from the artists’ circles of acquaintance (thus including “Mary Magdalene” and “St. Matthew”—the models, that is, who pose as such for Caravaggio’s pieces), and the ball in serve is, as promised, made from the hair of Henry VIII’s sacrificial wife. Enrigue somehow then manages to intertwine characters and objects from the Old World and the New so seamlessly that they achieve a near identity by novel’s end. It’s an odd equation, but the novel’s logic is hypnotic: the Ann Boleyn ball is to the New World as the miter is to Old. Both however now reside in the New and wind up on the court with our two world-historical rivals. But why? What conceivable reason could be found to bring these figures onto a single tennis court in 1599? And to what end are they so marshaled?

Enrigue himself acknowledges this question. In his words: “As I write, I don’t know what this book is about…. Maybe it’s just a book about how to write this book; maybe that’s what all books are about.”

The fatalistic solipsism on display here occurs elsewhere. In the words of the author, in one of his infrequent but powerful appearances, “We are who we are, unfixable, fucked. We wear tennis shoes. We fly from good to evil, from happiness to responsibility, from jealousy to sex. Souls batted back and forth across the court.”

The only certainty, ultimately, is annihilation, and that is an injustice that we all share. But ambiguity—or to put it another (franker) way, confusion—is the artist’s best defense against this cruel fate. And it is on that small, unlikely pivot point that Sudden Death finds its edge. Enrigue uses a European tennis ball and an American scapular to show how relentlessly uncertainty fuels the progress of civilization. No one knows exactly what it is that they want and no one knows exactly how to get it, but the collateral damage still accrues. And when the dust settles, we call that damage history.

Enrigue uses a European tennis ball and an American scapular to show how relentlessly uncertainty fuels the progress of civilization.

Enrigue’s project, in the end, is vengeful. He seeks to avenge the bland ignorance of the present and shine a light on a past that we have obliterated. That project is a noble one, but it isn’t unique. Quentin Tarantino, for example, has covered the same ground with even more energy in his recent films. What makes this novel stand out is its weaponization of the experience of uncertainty. Because although it is clear that an injustice has been done—to the Aztecs, in particular—it is very, very unclear to what extent we are culpable (aside from “totally”). Enrigue brings this point home most forcefully at another authorial appearance:

“Not that it matters: nothing matters. Species are extinguished, children leave home, friends turn up with impossible girlfriends, cultures disappear, languages are one day no longer spoken; those who survive convince themselves that they were the most fit.”

Things that are certain: death, taxes, and the stories we tell. Things that are uncertain: everything else, plus the stories we tell. Language, in other words, can make or break us. It’s not an unusual thing for a novelist to say, but it is unusual for that point to land as forcefully as it does here. Sudden Death has an obvious pun for a title, and sports metaphors are a recurring theme, but it has no end of surprises. The novel opens with a sporting duel between amorphous characters in an unruly game with an unknown cause; and although we do glean more about the players, and the sport, and the cause, this is all beside the point. There are a thousand clues in this novel of at least a dozen riddles, but the last word—“Tenez!”—still lands with a shock. And the fact that a review can end by revealing that word without spoiling the novel is a testament to a work of enduring power.

This is not a pretentious novel. This is a novel about how a Catholic response to an anti-Catholic movement in Europe affected life in the new world and gave rise to a new, global kind of phenomenon. Or, to put it another way—and to use one of the few reference points that the novel doesn’t use (perhaps too obvious)—this is a novel about Easter eggs. And like Easter eggs, one has the feeling that it will stick around for two very simple reasons: for surprise and for delight. FL