“HOPELESSNESS” is without a doubt protest music. But it’s what ANOHNI does with the blame game of world woes that sets this piece of artful dissent apart from countless others.
Menu

“HOPELESSNESS” is without a doubt protest music. But it’s what ANOHNI does with the blame game of world woes that sets this piece of artful dissent apart from countless others. 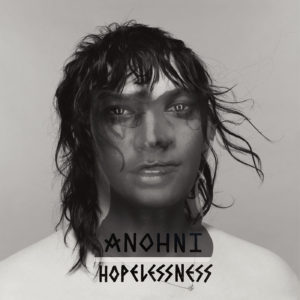 Destroy yourself, if you don’t know! — Frank O’Hara, from Meditations in an Emergency

There is a radical and righteous vulnerability at the beat-driven heart of HOPELESSNESS, the first record the artist formerly known as Antony Hegarty is releasing under the ANOHNI moniker. Over drums, synths, and strings programmed by Oneohtrix Point Never’s Daniel Lopatin and Hudson Mohawke’s Ross Birchard, Anohni’s haunted vocals glide and climb across their digital skybeds with avian abandon while her lyrics tackle the personal and the political with a stunning, almost surgical, focus. All of her longing from songs like The Crying Light’s “Aeon” and “Another World” and, frankly, every single second of her classic 2005 release I Am a Bird Now is still present, but the connection she seeks to fix is between something bigger than bodies and beauty. It’s her and us and the fate of the world.

The eleven tracks presented here lock eyes with their audience and don’t break their gaze for the next forty-two minutes, and the results are sometimes uncomfortable—unnerving, even. Opening cut “Drone Bomb Me” slices at the air with a club-drunk wash of keys and beats that don’t try to hide the shock of hearing lines like “Blow my head off / explode my crystal guts / lay my purple on the grass” in a song that’s trying to tackle the human toll of something as inhumane as drone warfare.

HOPELESSNESS is a record that offers up a lot of questions that aren’t easy to answer: why do the people who are supposed to protect us hurt us? Can we save our planet, much less ourselves? If executions are our dream, then who is the first to die? Who will be the last? Who is to blame?

This last question is pretty popular in the world of protest music, and HOPELESSNESS is without a doubt protest music. But it’s what Anohni does with the blame game of world woes that sets this piece of artful dissent apart from countless others; she doesn’t portend to stand outside of the problems she’s criticizing. Instead, she points her lyrical finger directly at herself.

Why are the dogs, fish, lemurs, and rhinos of “4 Degrees” burning in the trees? Because she wanted them that way. Why is she being surveilled while watching hotel pornography in “Watch Me”? Because she asked to be. She meets the slaughtered families in “Crisis” head on and doesn’t ask for forgiveness. She apologizes for being part of a world that destroys people from afar and then locks up those who speak out against it.

That sense of vulnerability is what keeps HOPELESSNESS from drowning in pedantry. What the record gets so incredibly right is its inborn understanding of the fact that, in order for anything to change in the world, we must first look into our darkest heart of hearts and see ourselves for what and how we are—and, in that crystal-gutted moment, allow a healing to begin.

That’s the gift of vulnerability and the gift of HOPELESSNESS. Together, they create a space for love, belonging, trust, and the courage to shoulder the blame and still find enough forgiveness in this life to birth something beautiful and true.

HOPELESSNESS doesn’t offer a single shred of “us vs. them.” No, it’s all harder to swallow and more hopeful than that. It’s us vs. us, and, yes, we are all we have.