He Said, He Said: The Wikipedia Hall of Fame

Two of our editors discuss their use (and abuse) of the online encyclopedia using the preferred forum of pop-culture enthusiasts everywhere: G-chat.
Menu

Art & Culture
He Said, He Said: The Wikipedia Hall of Fame

Two of our editors discuss their use (and abuse) of the online encyclopedia using the preferred forum of pop-culture enthusiasts everywhere: G-chat.

Despite what your professors might’ve told you, Wikipedia is incredibly accurate. 99.5% accurate, in fact, according to a 2014 study. But regardless of where it stands in the battle to get academia to put some respek on it, there’s no question of its status in terms of cultural respek. And for two of our editors, life just wouldn’t be the same with it. Thus, before they could be pressured for more donation money to keep it going, they thought that it was high time they got to discussing why it is that Wikipedia is the HTML powerhouse that it is.

Daniel: So a new study from the Knight Foundation (that’s one of your favorite foundations, right?) suggests that everyone uses Wikipedia, and everyone uses it all the time. Its mobile app in particular absolutely blows away the apps from FOX and CNN, to take just two examples. Does that surprise you?

Nate: Considering how frequently I have to browse in shame while Jimmy Wales keeps his merciless stare on me during their pledge drives, that does surprise me a little bit. That it’s surpassed CNN, though, doesn’t surprise me at all.

Daniel: Ha, right, perhaps a bad example. By the way, I’m reading the Jimmy Wales Wikipedia page right now to see if anyone’s snuck in some dirt without him noticing…

Nate: Not gonna happen. He sees all… Plus, aren’t pages like his and Colbert’s locked down at this point? [Editor’s note: Colbert’s page has a “semi-protected” status.]

Daniel: Yeah, the “controversy” section is not as impressive as I would like it to be. Usually it’s the best, here it’s just more blah. But speaking of bests, what goes into your Wiki Hall of Fame? For me it’s the Steve McQueen entry, which reads like an index of small evils—but also like a sequel to The Adventures of Augie March.

Nate: Yes!! McQueen’s page is crazy!! Just the early years are insane; like, before he was eighteen he worked in a brothel, an oil rig, and the freakin’ circus, and then he joined the Marines, where he turned a dishonorable discharge into an honorable one by saving five Marines from drowning. And then became a motorcycle racer! Oh, and after that he became an actor or whatever. 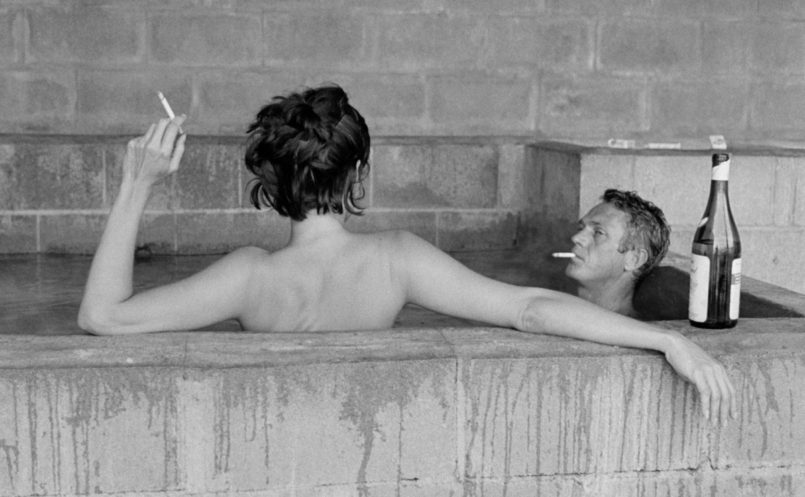 Daniel: Yeah, and here is him just embodying lowercase evil:

After discovering a mutual interest in racing, McQueen and Great Escape costar James Garner became good friends. Garner lived downhill from McQueen, and McQueen recalled, “I could see that Jim was neat around his place. Flowers trimmed, no papers in the yard…grass always cut. So to piss him off, I’d start lobbing empty beer cans down the hill into his driveway. He’d have his drive all spic ‘n’ span when he left the house, then get home to find all these empty cans. Took him a long time to figure out it was me.

That was something he did to his good friend. And then in the very next paragraph he is all of a sudden married to one Barbara Minty McQueen (name trumps!) and becoming an Evangelical Christian, perhaps due to the outsized influence of his Rasputin-y flying instructor, Sammy Mason.

But when I’m not refreshing my McQueen archives I mainly use Wikipedia in the most common way imaginable, when I’m just like “…who now?” Do you find any uses beyond that basic utility? Like are you the one person who uses it for actual news? Or who impresses friends with factoids pulled from the home page?

Nate: Ha, there’s a homepage for Wikipedia? No need for any of that nonsense. Usually I just Google what I want to read about and Wiki is the first option, and deservedly so. I first got into using it for music. It’s such a great place to wrap your head around the discography of a band or artist or whatever and find out quickly what you should be listening to in addition to getting some great trivia to trick people into thinking you know more than you do. I feel like half of why I’m into Talking Heads as much as I am is because the Wiki articles on them are fantastic.

But none of that stuff is Hall of Fame. There’s a whole other side of me that just seeks out the weird and wackiest stuff I can find, usually through Reddit or another site like that.

Daniel: Yeah the relative objectivity plus attention to detail makes it a great place for cultural introductions and re-appreciations.

Nate: For instance, have you heard of Merkle’s Boner?

Daniel: I have, via Ken Burns! Greatest boner of all time; also greatest Merkle. But I don’t actually understand what happened. Ken Burns only taught me the vibe of it.

Nate: (I would like to apologize in advance for causing the words “Boner” and “Ken Burns” to be used in such close proximity.) As far as I understand it, Merkle made the mistake (a.k.a. the “boner”) of not touching second on a walk-off hit in the midst of a pennant-race. It’s what you might call a “TOOTBLAN” in modern terminology.

Nate: This is one also interesting cause it led to the Cubs winning the 1908 World Series, and we all know how rare an occasion that was to become—though maybe not for much longer. 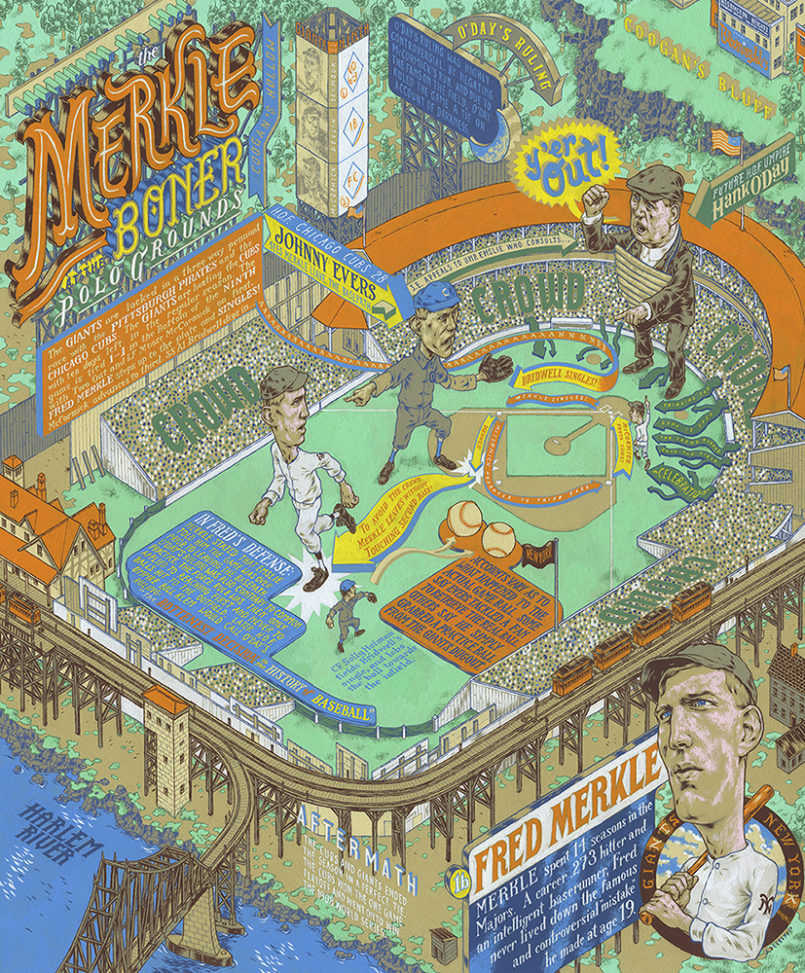 Daniel: What band of athleteers was this Merkle character a part of? Was he a Rapid City Blue-Stocking or one of the famed Lumberados of Forest City?

Nate: Not sure, but I think he might’ve been a reserve on Mr. Burns’s original lineup for the All-Star Power Plant softball team.

Nate: Yeah, totally brutal. He had to hide his boner in shame for the rest of his days. So naturally that boner is in my Wiki Hall of Fame alongside stuff like this: a comprehensive list of accidents that’ve happened at Disneyland.

Daniel: I am pursuing film rights for this page immediately.

Nate: Disney is now suing you for just thinking of such a thing.

Daniel: Copyright Pre-Crime unit, attack! All of these sound like Simpsons Treehouse of Horror episodes.

Nate: Haha, or they could all basically be different iterations of that one Itchy & Scratchy Land episode.

Daniel: Yes. Wow. “Measles Outbreaks,” “Guest Altercations,” “California Screamin’”… All of these headers are top notch. Can I throw another Disney property atcha? The TaleSpin page. Which not only reveals the absolutely bizarre conceptual DNA of this crazy Duck Tales spinoff—including half the population from The Jungle Book, the bar from Casablanca, ideas from a Miyazaki show, and the Rebecca character from Cheers (“Becky” in TaleSpin), additional characters from The Jungle Book, Casablanca, and a Miyazaki show—but also has episode synopses that make frequent and entirely apt references to such things as “air pirates.” I relied heavily on this page in crafting a wedding speech for my brother.

Nate: I hope your sister-in-law happens to have equally zany taste in forgotten children’s programming. This show is insane. “Hey, you know what’d be a good title for a kids program? A pun playing off the image of something crashing and burning.”

Relevant to children’s programming, have you seen this list of the movies with the highest use of the word “fuck”? This is what Wiki is amazing for. Personally I’m still surprised how far down Big Lebowski is.

Daniel: Was Swearnet: The Movie created with the simple goal of topping this list? Because if so, well done.

Nate: It’s a strange and very slow-burning marketing strategy, but I like it.

Daniel: But yeah, these kinds of lists are a strong element of the Wikipedia project.

Nate: Oh, yeah. Here’s another classic: The list of sexually active popes. These middle-ages popes were downright freaky. Aaaaaand now I’m afraid that this conversation has put us on the shitlists for both Disney and the Vatican.

Daniel: Man alive, this is pretty extreme on the oddball spectrum. Uh, what first brought this list to your attention?

Nate: Do…do I have to answer that…? Ha, it’s not as bad as it seems. I actually first saw it on a Wiki list of “unusual” Wiki articles!

Daniel: And with that, the snake has consumed its tail. FL