No one will confuse the Dylan of this record for his swashbuckling younger self.
Menu

No one will confuse the Dylan of this record for his swashbuckling younger self. 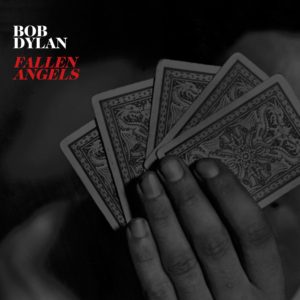 At this point in his legendary career, Bob Dylan is doing what he’s always done best: ripping up the rulebook. Whether it’s going electric, collaborating with Johnny Cash, turning into a Christian fundamentalist, or becoming a wily old bard, Dylan has always changed direction faster than the wind blows.

The aforementioned collaboration with Cash on Nashville Skyline is one of the only moments in his recording career where Dylan showcased his true singing voice—until the release of last year’s Shadows in the Night collection, where he sang a batch of standards from the venerable Frank Sinatra. That release puzzled even the most loyal of Dylan fans; since when had Dylan, the poet of the counterculture, shown affection for a man who was the very definition of the status quo?

Yet here we are with Fallen Angels, where Dylan doubles down on his Sinatra admiration. On Shadows in the Night, Dylan sang—in his true voice—a number of songs that explored themes of loss, loneliness, and other elements that seemed to reveal him grappling with his mortality. Fallen Angels also deals with a murky future—Dylan is turning seventy-five—but this time things are a bit brighter. No one will confuse the Dylan of this record for his swashbuckling younger self; that’s what makes Fallen Angels the perfect accompaniment to its predecessor.

Songs like album opener “Young at Heart” may not reflect his notoriously sharp-witted persona, but they do offer the dual meaning that Dylan usually intends on his albums. The choice of that song in particular has the feel of a man who’s coming to grips with his own destiny. Though he’s never been one to embrace the media nor give away his creative process, Dylan loves leaving Easter eggs for his fans to dissect. By keeping the song’s structure close to the original, he hints that he’s not giving up on living, though he may be tapped out creatively.

What makes Dylan’s take on Sinatra interesting, like last time, is his song selection. He mostly uses cuts like the early Sinatra hit “Polka Dots and Moonbeams” and “It Had to Be You” to produce a narrative that shows him as a lounge singer winking at the fans who can’t quite figure out the direction he’s taking them in. Hearing Dylan attempt to swing is as humorous as anything he’s ever done, and certainly cognizant of this fact, his focusing on Sinatra’s big-band era is a way for him to have genuine fun while retaining his ambiguity.

Throughout his career, Dylan has been an expert at challenging, surprising and frustrating his fans. With many of them entering their own twilight years, he delivers yet another curveball. Are these albums the longtime boxing fan’s way of throwing in the towel on songwriting, or is it his way of taking a timeout before another great period of fluid songwriting? It’s a question that makes the concept of Fallen Angels more intriguing than the output itself.