Little Bundles of Joy: “BoJack Horseman” and the Art of the Minor Epiphany

“BoJack Horseman” is a show that’s about a lot of things—adulthood, ambition, depression, Los Angeles, legacies, and more—but the recent “Fish Out of Water” episode shows how it can deliver profundities even when it isn’t trying, simply by plumbing the depths of its utterly original world.
Menu

Film + TV
Little Bundles of Joy: “BoJack Horseman” and the Art of the Minor Epiphany

“BoJack Horseman” is a show that’s about a lot of things—adulthood, ambition, depression, Los Angeles, legacies, and more—but the recent “Fish Out of Water” episode shows how it can deliver profundities even when it isn’t trying, simply by plumbing the depths of its utterly original world.

The reviews are in, and they’re unanimous: the “Fish Out of Water” episode of BoJack Horseman’s current season is “perfection;” it is “incredible;” it is a “masterpiece.” It may sound hyperbolic, but even if you don’t like or watch the show, this episode is truly worth seeking out. There’s no shortage of recaps out there already (and Vox has a fantastic discussion of the episode’s creation—and the inspirations behind it), but in very brief, “Fish Out of Water” follows BoJack into “Pacific Ocean City,” where the show’s physics/metaphysics mandate that BoJack can neither smoke, nor drink, nor talk. Most of the episode thus takes place in silence as BoJack attempts to (a) promote his new film, (b) make amends with the film’s director, (c) get himself back to his premiere when he misses his bus stop by thirty nautical miles, and (d) get a baby seahorse back to its adult seahorse dad at the same time. Every one of these facets (and more) winds up paying huge dividends, both in the short and the long-term, but I want to focus on that baby seahorse. Because first of all, dat ass! 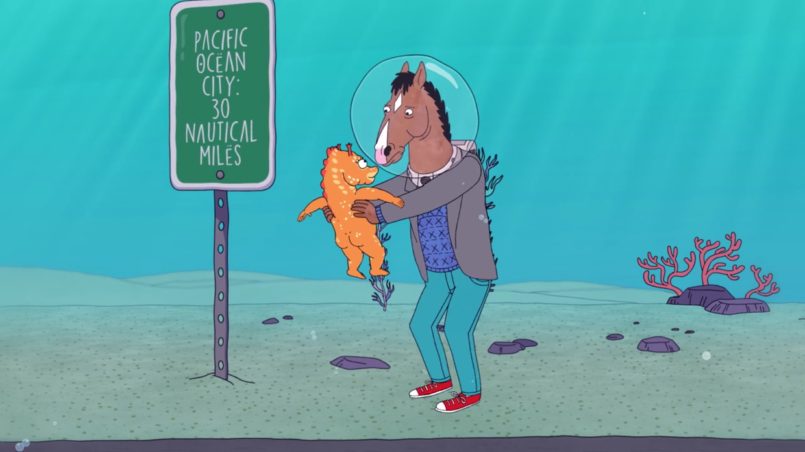 The show’s production designer (and spiritual center) Lisa Hanawalt has said that she wanted the baby seahorse to be “heartbreakingly cute”—and it is—but it was designed so as to echo Harper, BoJack’s hallucination-induced “daughter” from season one. That may make it sound as though the seahorse is intended as a kind of referendum on BoJack’s attitudes toward maturity and parenthood (and yeah, sure), but it winds up being much more than that.

This episode is especially insightful and eloquent on the topic of parenting (which comes as something of a surprise, given BoJack’s overwhelming ambivalence on the topic). I’m a new parent myself. And although most everything has gone according to plan so far (no major health emergencies; baby exists; baby eats barbarically; baby defecates triumphantly; baby charms unremittingly; and you presumably don’t really care, justifiably), one mystery has remained—and it’s the same one that I most wanted answered before having a child. It’s an answer to the question: why does anyone want to do this? From a distance, it looks and sounds like you lose the ability to do many of the things you previously enjoyed, and in return you get a walking liability.

The baby seahorse is the silent solution to the question that words can’t ever answer completely.

I asked people about this in a variety of ways, and all I ever got was a bunch of empty declarations (“It’s just so fun!” “They’re so great!” “You won’t regret it, even when it’s awful!”). And when I pressed for more, it wasn’t there. But these people weren’t being coy or precious; they seemed sincere and genuinely at a loss, but that doesn’t make “you just have to experience it yourself” any more convincing as an answer. But now here I am, and if you asked me what’s so great about being a parent, I’d say the same things in pretty much the same way, because what else can you do? Which brings me back to the seahorse—the silent solution to the question that words can’t ever answer completely.

The baby seahorse fails at talking, sitting, listening, suckling, staying quiet, staying put, calming down, and not eating cigarettes. It fails relentlessly. But it also laughs relentlessly, and strives relentlessly, and once again, there is the issue of dat ass, dose eyes, dat heart. I love this seahorse and feel that BoJack is absolutely right to want to abandon him. He is indeed heartbreakingly cute. He shows why parenthood is awful and why parenthood is great, because he makes the question disappear in light of his urgent, adorable needs—and I don’t think you have to be a parent to feel that way, to feel like the question’s settled.

And that’s not even what the show was trying to do—or at least not primarily. The baby’s power comes as much from its being a seahorse as it does from its being a baby. It is utterly of this new underwater world (a world that comes complete with its own species, its own physics, its own script, its own obscene gestures, and its own set of visual puns), and that makes it stand out as something doubly strange, even while its giant eyeballs and tiny voice make it utterly familiar. It is uncanny, but in a good way.

BoJack Horseman is a cartoon about animals. That initially seemed like a gimmick, a giant, smiley-faced sun dancing above the show’s enduring gloom; but it doesn’t seem that way anymore. Now, instead, it seems like a gauntlet that the show continually refuses to drop. This bizarro world isn’t real, but its bizarro rules certainly are. And so while the show may offer an answer about why people (or horses) would want to take on the challenge of raising a child, that’s not the question that it’s tackling. Instead it’s asking: (1) what kind of baby would BoJack encounter here, (2) why would he take it with him, (3) how would he feed it, (4) how might he lose it, and (5) what would he do if he fell out of a window with it—how would they continue to be?

The seahorse is one example of how the show’s adherence to its rules can take it to places that are deep because they are organically true, not because they are trying to be philosophical. But it’s one example among many. It’s the same thing with the episode’s punch line. It’s funny because it’s sad, and it’s sad because it’s funny, and it’s all set up by the very serious question: what would BoJack Horseman look like underwater…literally. It’s a great episode, and once again: dat ass.

Read our cover story on BoJack Horseman from FLOOD 2.