Under The Influence: Jonathan Lethem

The author of “Motherless Brooklyn” and “The Fortress of Solitude” on the inspiration behind his new novel, “A Gambler’s Anatomy.”
Menu

The author of “Motherless Brooklyn” and “The Fortress of Solitude” on the inspiration behind his new novel, “A Gambler’s Anatomy.”

“Most artists are brought to their vocation when their own nascent gifts are awakened by the work of a master,” wrote Jonathan Lethem in his 2007 essay “The Ecstasy of Influence.” “Finding one’s voice isn’t just an emptying and purifying oneself of the words of others but an adopting and embracing of filiations, communities, and discourses. Inspiration could be called inhaling the memory of an act never experienced.”

Only Lethem didn’t write those words. They were originally penned by Lewis Hyde in his book The Gift, and they make up one of the dozens of carefully stitched-together passages from other writers that Lethem arranged around words of his own to make his essay’s central point: that we fail to comprehend the ways that not only art and literature but also language and everyday communication are formed by the creations of others.

Which is a long way of saying that, mathematically speaking, he’s not afraid to show his work.

Lethem’s new novel, A Gambler’s Anatomy, begins with a devastatingly handsome professional gambler in Berlin and ends with a viciously deformed man in sweatpants who scrounges around Berkeley. Though they share a body and a name—Bruno Alexander—it feels strange to call them the same person. In a lengthy passage that sits at the middle of the novel (“a crater,” Lethem calls it), the self-absorbed Dr. Behringer painstakingly removes a cancerous growth from behind Bruno’s face. Or, as he chummily puts it ahead of the procedure, “Think of your face as a door… We’re going to open it, most gently.”

Such Cage/Travolta exploits sound terrifying, and A Gambler’s Anatomy is not afraid to make you fearful. But the facial-surgery section also happens to be one of the novel’s most moving set pieces. That’s owing in part to the fluidity and elegance of its writing, but perhaps even more so to the grace that Lethem bestows upon his beleaguered protagonist. Devoid a consciousness yet mysteriously able to read the minds of those around him, Bruno, who has spent his life trying to escape his past in Berkeley, is not the center of his own attention for the first time in his entire life. In a very real way, Dr. Behringer excises Bruno’s solipsism, and the gambler spends the rest of the novel learning how to see from eyes that, if not technically new, have at least enjoyed a brief vacation from his skull.

A Gambler’s Anatomy is a novel concerned with influence: the way a plot of land and a personality can both loom over a person and a place, shaping the trajectories and consciousness of either in ways that can’t be resisted.

Here, Lethem gives us a tour of the magnets that pushed and pulled him along the way as he composed his new novel, from the dark corners of the Australian Outback to the invigorating world of surgical narratives.

I was living in Berlin and re-reading Graham Greene in a sort of exploration of my own early reading; I wanted to go back to some of my sources for what qualified for me as a grown-up novel. Greene was a big fixture of my early reading life, so I was re-reading and realizing how much he had sunk into my operations. [In part,] that’s formal things, like how he structures a novel or chapter or paragraph, his idea of what it was to reveal a character and construct a story.

But I also had this powerful identification with the image of the expatriate. [Greene] constantly has these unhappy men disintegrating in distant locales: the failing white man in the colonial backdrop. The Heart of the Matter, Our Man in Havana, The Comedians. Their naïveté or their ignorance defines their relationship to the place they’re moving through as much as anything.

[A Gambler’s Anatomy] is much more absurd than anything Graham Greene ever wrote because I can’t stop deforming my material in the direction of making fun of myself. And also I had contradictory ideas: here I am with this cool, slightly retro image of the imperialist handsome jerk being exposed in his delusions, but I was also fixated on the idea that I wanted to write a kind of horror story about surgery. It’s a destruction at several levels of the presupposition that the major character is in charge of things or has even made a strong impression on anyone. So one of the things I wanted to do was write a Graham Greene book and destroy a Graham Greene book at the same time.

I’ve always loved stories about gamblers: The Hustler, both the Walter Tevis novel and the Paul Newman movie; Don Carpenter is one of my favorite novelists, and he has a lot of pool players and poker games in his stories; my favorite Robert Altman film is California Split.

There’s also a really great novel that someone gave me when I was last in Australia called Wake in Fright by Kenneth Cook. It’s an amazing, relentlessly dark gambling story about this guy who ends up [stranded] in the Outback on his way home to Sydney. He’s saved up money, but he ends up getting mixed up in this indigenous gambling [scene] and completely destroys himself. It’s basically Australian noir, but with a very distinctive atmosphere. 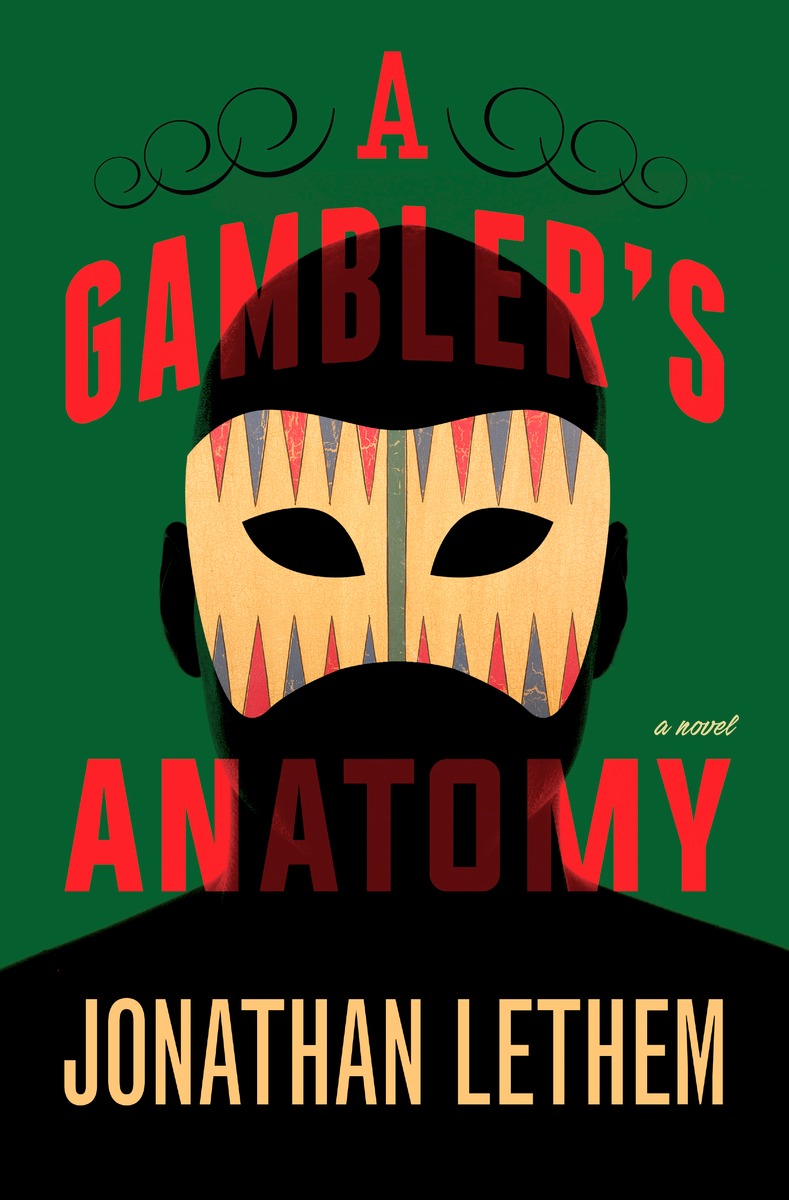 Wherever He’s Not Currently Living

To me it’s mysterious how my east-coast/west-coast split filters down into my writing. I wrote a whole LA novel—You Don’t Love Me Yet—completely while living in New York, and I was actually living in Toronto when I wrote most of The Fortress of Solitude, which I’m sure most people would credit to my return to Brooklyn. To me, there’s energy generated by exile from a place—pining for it or pushing it aside and then being confused about why I’m far away again.

Here, I wrote about Berlin, where I’d just been living for five months, and I wrote about Berkeley, where I haven’t lived for almost twenty years now. It’s like it just came due: suddenly I had some feelings about it that I could use and make something of. I knew that Bruno wasn’t a New York character, but then again, some of the anxiety he has about being from a place and not wanting to be from that place probably does come from my relationship to Brooklyn.

How I use places that mean something to me is deceptive; it’s often even deceptive to me. Sometimes one place disguises itself as another.

Another [facet] of the book is the face-horror aspect of it—the surgeon eating your face, which comes from me wanting this book to be like a David Cronenberg movie. Not one of those early gory ones, but the more sublimated, late-phase films like Dead Ringers. [It’s there in] the sort of destruction that comes to the character. There were a couple of other film influences—there’s a great John Frankenheimer movie called Seconds where this middle-aged businessman gets transformed into Rock Hudson and starts his life over again. I kinda wanted to play Seconds backwards and see what would happen when the beauty’s taken away. There’s also this great French horror film called Eyes Without a Face that has this super-traumatic surgical sequence in the middle of it that once someone has seen it they can never get out of their heads.

“I kinda wanted to play Seconds backwards and see what would happen when the beauty’s taken away.”

The Dull Monotone of Surgical Accounts

Surgeons always have to account for their actions, so they go into these narrative modes right after [the surgery]. They may have the assistance of a visual account, but they have to create [a written] account of their own culpability—“then I closed off this artery, then I did this”—so they write these pretty extensive narratives. If it’s a really long surgery, it has an epic quality. It’s a very autistic narrative style because they’re not shading it with any motivation or putting in any apprehensions. They just keep plodding forward. I had to read a few of these narratives, and if [Gambler’s Anatomy’s middle passage] has that orchestral quality, perhaps it derives from me inserting some of the uncanny, flat, diligent tone of the surgical accounts.

Once I started identifying with [Philip K. Dick] so strongly and was reading about him—such that you could back then as there wasn’t that much writing about him—it’s hard to know what’s the chicken and what’s the egg; there were a lot of things that influenced my sense of the vitality of marginal identities or what I call “termite operations,” borrowing from Manny Farber, the great film critic. It’s the pleasures of working from the floorboards, trying to remain in a dissident or exiled space in relation to the main currents of the culture.

That can sound quite a lot like, for example, hating your favorite band as soon as they sign to a major label just because you want to stay cool, and I’m sure when I was fifteen years old, I was erroneous in all sorts of my preferences because of those kind of anxieties. But I figured out at some point that I don’t really have as much to say from a position of power. Even when I’ve been given the main stage in certain ways—I think that happened to me a little bit—I found it pretty useless. FL