Sex, Death, and Suffering: A Conversation with Julia Gfrörer, Author of “Laid Waste”

The graphic novelist talks about her latest book, out this month from Fantagraphics, and shares exclusive pages.
Menu

The graphic novelist talks about her latest book, out this month from Fantagraphics, and shares exclusive pages.

Julia Gfrörer creates comics about tough situations in dark times—and as a result, she thinks a lot about martyrs, saints, and the Middle Ages. When I was putting together a coloring book about martyrs last year, she was the only artist I considered. She’s able to translate those stories of holy suffering into images without being either exploitative or dishonest. And that’s no easy feat, because the gore factor is high, and the underlying ethos is quite foreign.

Laid Waste, Gfrörer latest book, is no different. It’s set in a small medieval village beset with plague. The problem, trite as it sounds, is finding a way to do more than just survive. And that problem feels urgent, even if the threat of the Black Death is now far removed. I had the chance to speak with Julia about her book, and she was kind enough to share some exclusive pages with us as well. 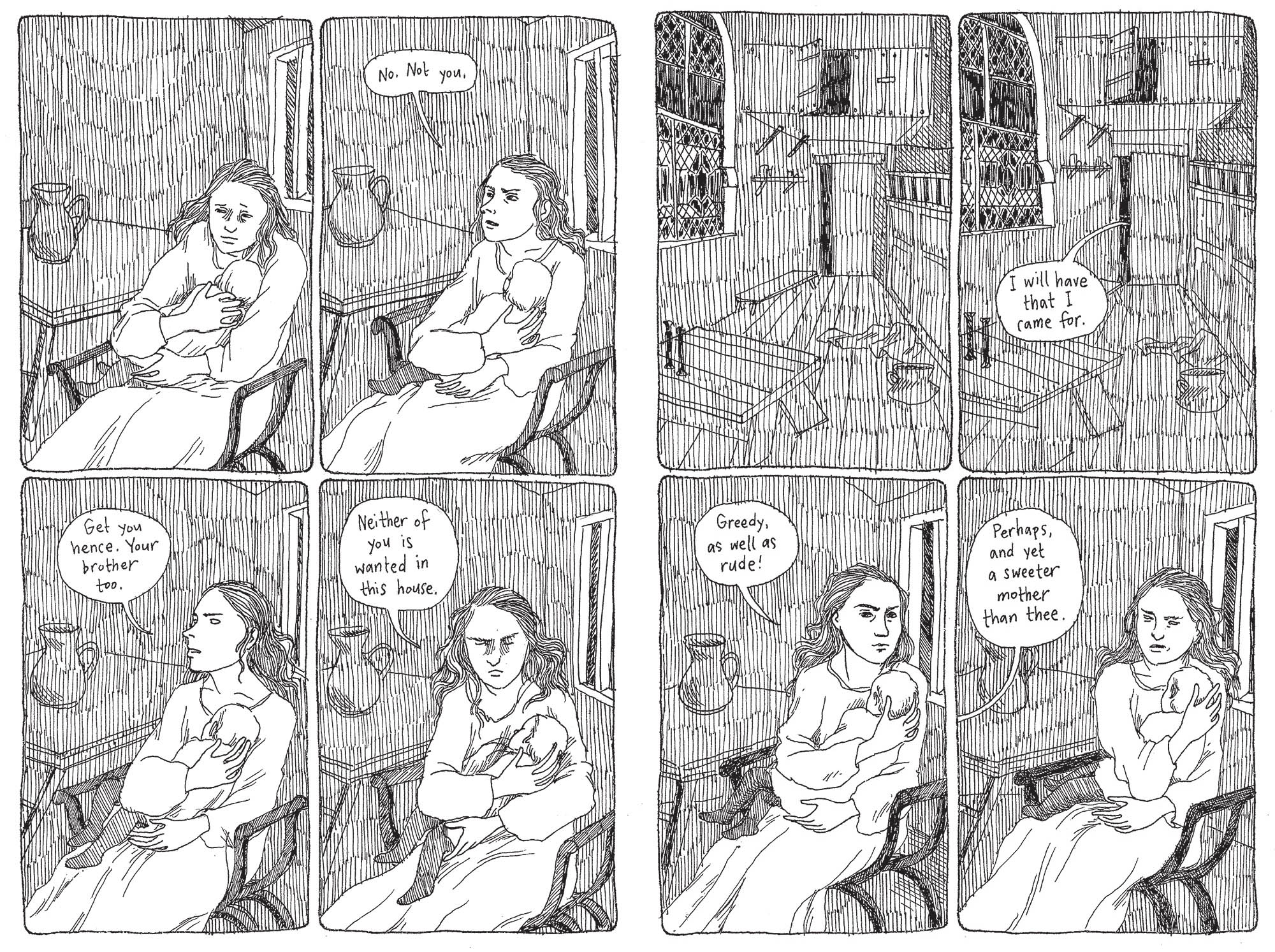 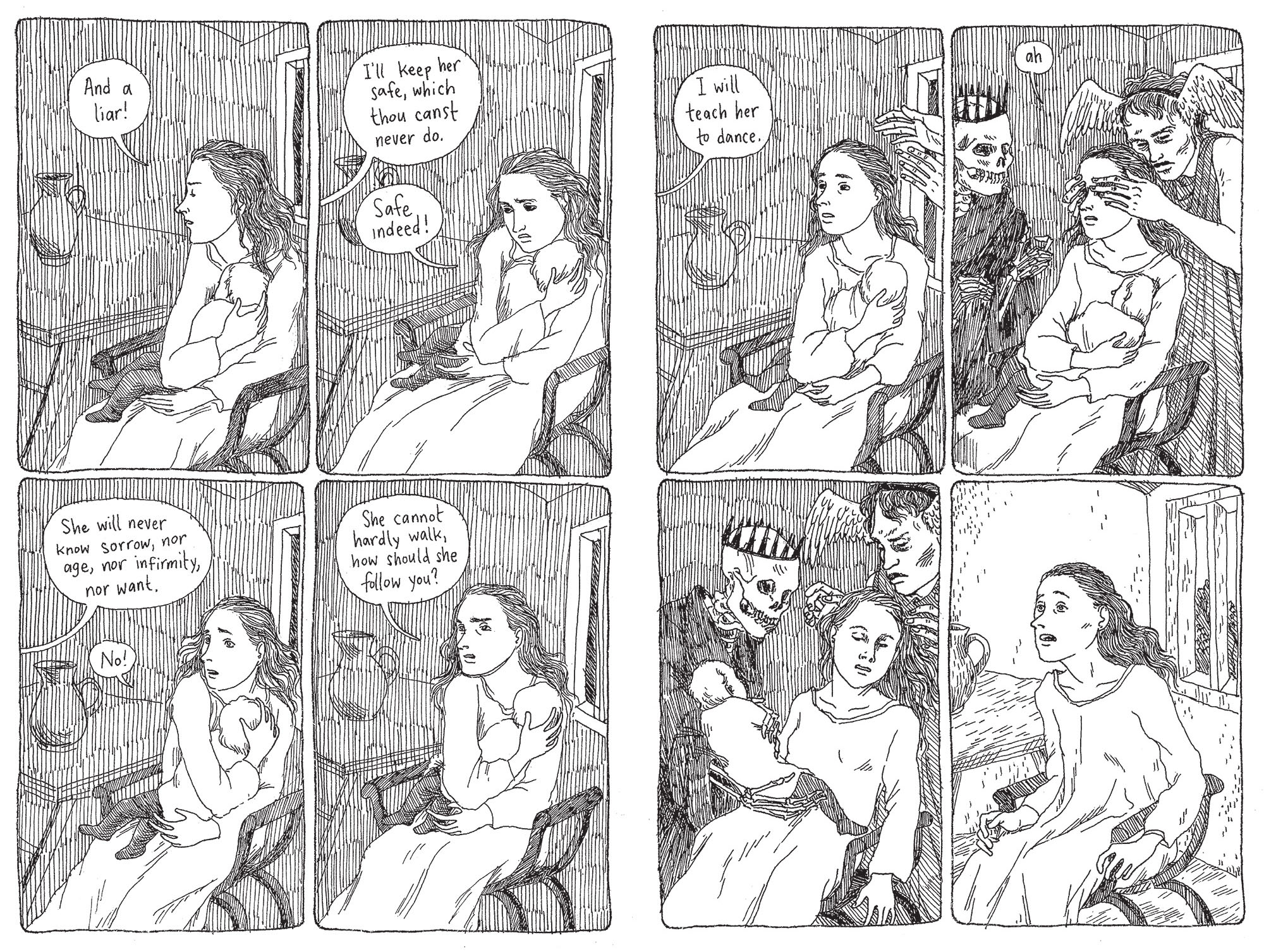 Where did your interest in the Middle Ages first come from, and what sustains it now?

I’m not sure. I think I first encountered a sort of pseudo-medievalism in things like The Last Unicorn, The Black Cauldron, and (to a certain extent) The Neverending Story. As an older child I remember watching Robin Hood: Prince of Thieves over and over, and also being captivated by the aesthetics of the band Pearls Before Swine, who often used medieval art on their albums or referenced a kind of “lepers and roses” wistfulness in their lyrics.

Can you say what it was that first inspired this particular story?

It was influenced by the moving eyewitness account of Agnolo di Tura del Grasso, which reads in part:

They would swell beneath their armpits and in their groins, and fall over dead while talking. Father abandoned child, wife husband, one brother another; for this illness seemed to strike through the breath and sight. And so they died. And none could be found to bury the dead for money or friendship.

“I aspire to an unobtrusive and convincing setting, rather than an accurate one.”

I had read several accounts like this that described something like shell shock—a horrorstruck apathy—combined with a degradation of once-accepted morals and even an embrace of vice, because no punishment in heaven or on earth could be worse than the present reality. I don’t remember why I was reading them. Curiosity, I guess, and perversity. Anyway, I stashed those accounts away in my brain, and then at a time when things got particularly difficult for me, and I doubted my response to my own grave situation, I thought of those people, and when I wrote about it I placed my story among them. 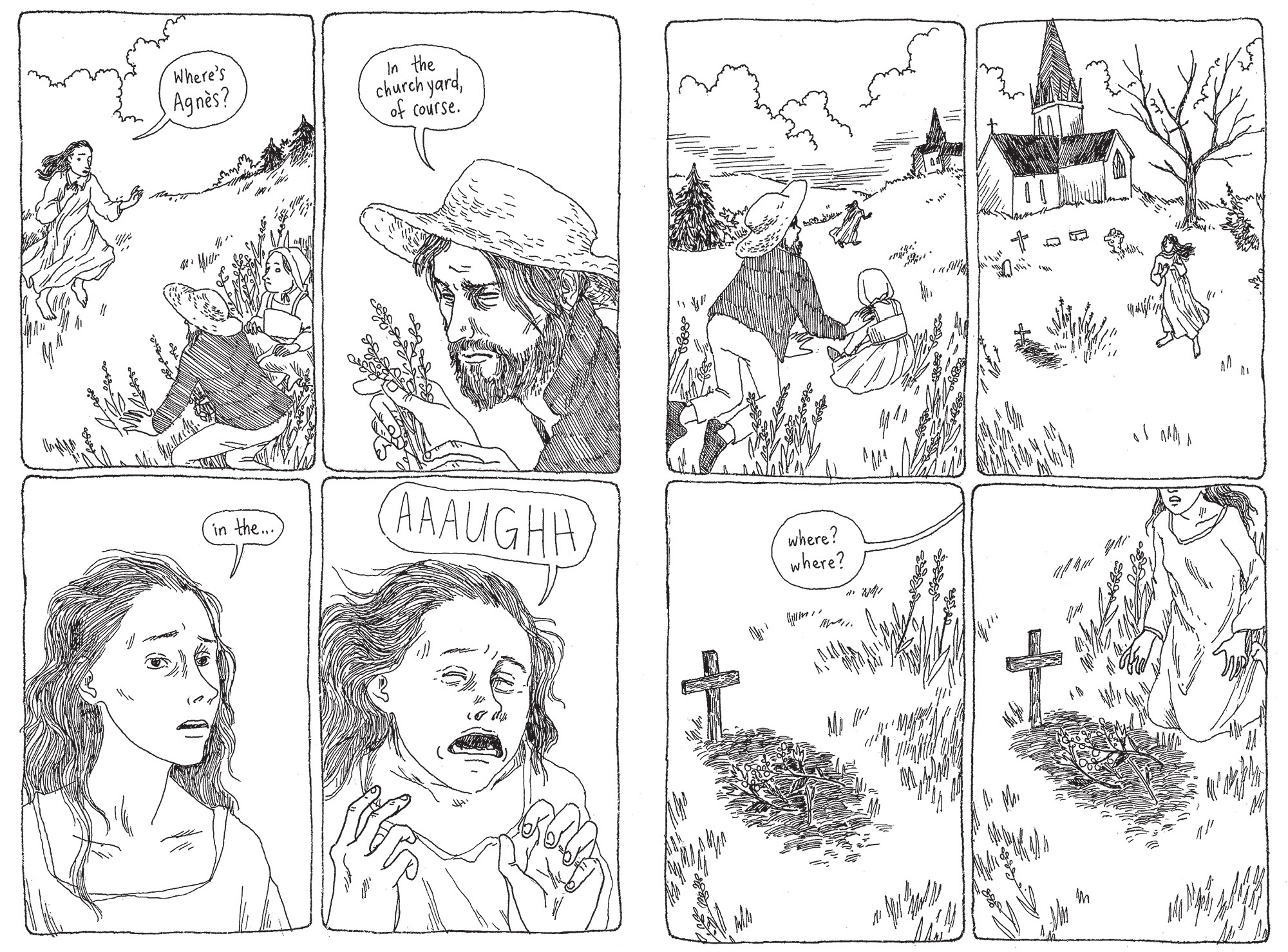 What level of research did you have to do in order to create this village, this story, these characters?

As I mentioned, I read some eyewitness accounts, and of course I did a little reading about the symptoms of the disease itself, but most of my research was aesthetic. I looked a lot at costumes, homes, things like that. I read about how bread would’ve been made in the fourteenth century. And then I threw some of those things out of the window when they conflicted with how I wanted the story to work. I also ended up inventing a few things that eluded my meager research skills. No recreation of history is ever correct in every detail, and my book isn’t a history but a fiction in a historical setting, so at a certain point I have to let some details slide and get on with the comic. I aspire to an unobtrusive and convincing setting, rather than an accurate one.

The Middle Ages are endlessly fascinating to me because it seems that no matter how much I read—whether fictional or nonfictional—I never get to the point when the landscape as a whole seems any less alien. Or maybe it’s better to say that it’s uncanny, because it seems both proximate (Religion! Politics! Fear!) and distant (Saints! Kingdoms! Plagues!). You’ve created a vivid picture of a medieval village and the people who populate it, but there’s plenty that’s strange here, too. How do you relate to this period of time? 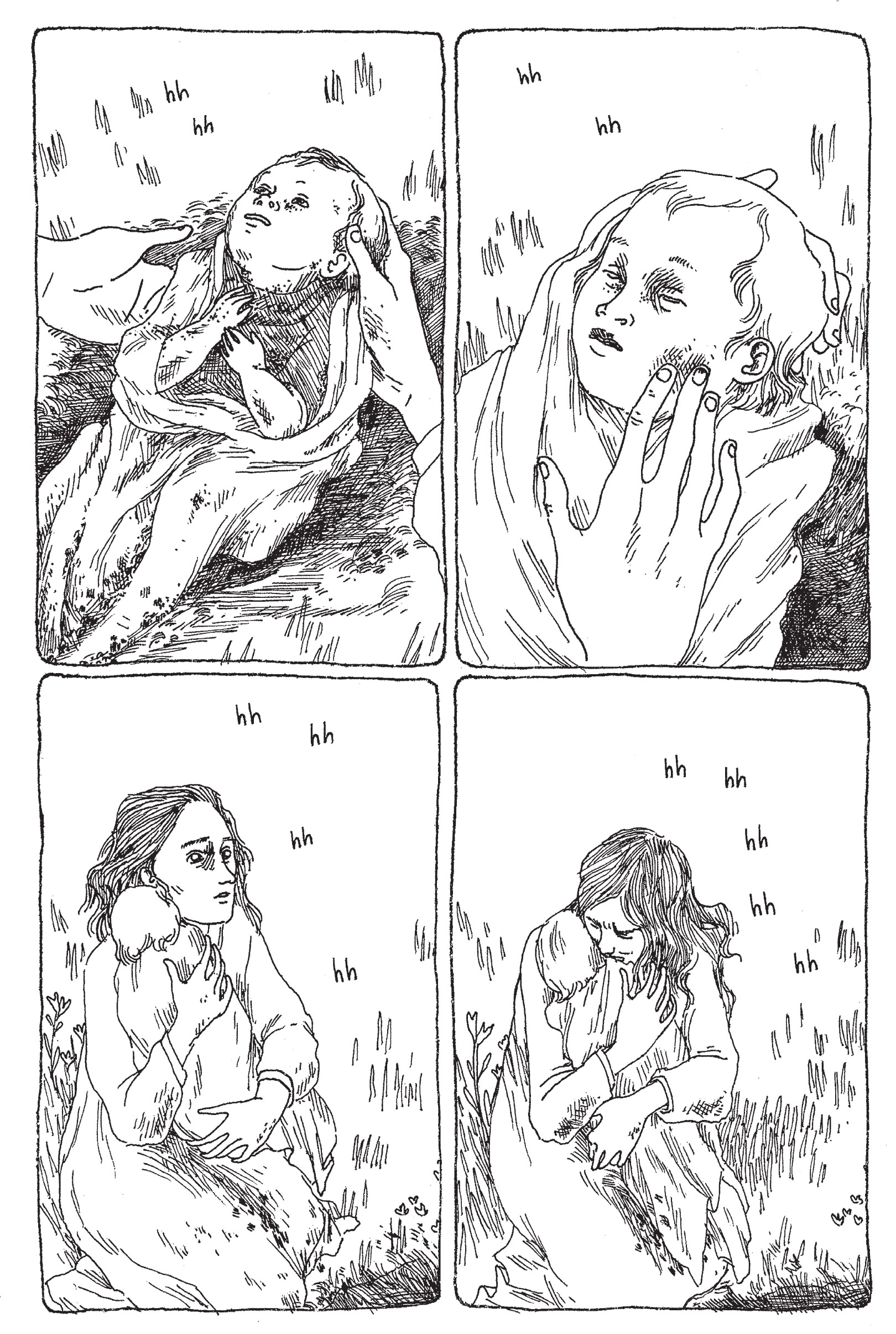 It’s a fallacy to assume that our ancestors were enormously different from us, but inaccurate to imagine them being very like us, too. You sometimes get glimpses of things that are shockingly familiar—for example, an exhausted scribe noting in the corner of a manuscript page that his workday is almost over. But other things are very difficult for us to understand: it’s in vogue now to identify with historical witches and heretics, but we rarely see ourselves as the bigoted accuser.

How do you think the length of your books relate to their content?

I would like to say that I make my comics precisely the length they need to be, but I guess it would be more accurate to say they’re the length I can bear. I could have made Laid Waste longer, but there’s a limit to how long I can sit with my own idea. My art from ten years ago looks so dashed-off, like I was just trying to get it over with. Laid Waste takes about as much time to read as a short story, but literary terminology coined for prose isn’t ideal for comics. It’s a reasonably sized graphic novel, however it is much smaller than what’s usually meant by the word “novel.”

One of the little things that stood out to me here was the way you expressed sound. I’m thinking particularly of the panting noises (“hh hh,” “hh hh”) in your prologue. In such a quiet book, those noises stand out. Is that something you spend a lot of time thinking through, or how do you arrive at those representations of sound?

“It’s a fallacy to assume that our ancestors were enormously different from us, but inaccurate to imagine them being very like us, too.”

I always feel a little uncomfortable inserting onomatopoeia into my work. It’s part of the standard comics toolkit, but there’s a part of me that feels foolish spelling words that don’t exist, or writing them in expressive text, outside a speech balloon. It seems cartoony. In this case, I needed to show that the baby was still breathing, but just barely. I did not want the mother to be forced to comment on it. “H” is the smallest sound you can make—it’s not even voiced, just a little exhale. But a single “h” floating alone in a panel is difficult to parse, so I gave each one a partner.

There is nothing so appealing to me as seeing representations of conceptual beings like death or the devil. Do you have any particular favorites in that mode—whether they signify death or some other idea?

I was also really struck by the way you managed to incorporate the strange medieval trinity of sex, death, and comedy. Is that trinity something that makes immediate sense to you, or did you have to think through that a bit?

It definitely makes sense to me. To quote Flowers for Algernon, sexuality is an act in defiance of death; it creates “a link in the human chain that [keeps] us from being swept into nothing.”

And I usually think of my work as tragedy if not horror, but I suppose it’s comedy in the sense of the Divine Comedy, meaning it’s written in the vernacular although the subject matter is serious. It is funny sometimes but I don’t know how it gets that way. FL