Guided by Voices, “August by Cake”

“August by Cake” is an album stuffed with songs that qualify as demos, half-baked ideas, and snippets, along with a handful of brilliant gems nestled in between.
Menu

“August by Cake” is an album stuffed with songs that qualify as demos, half-baked ideas, and snippets, along with a handful of brilliant gems nestled in between. 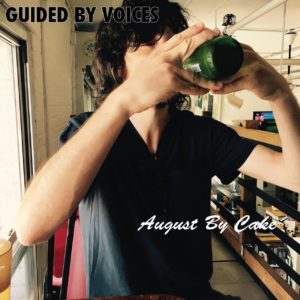 “You are insane.” That’s what Robert Pollard said to me in an interview ten years ago when I asked him to say five words about each album he had released up to that point. Now, however many albums later, one would have to be even more insane to provide such commentary. But it takes one to know one, right? With Guided by Voices’ August by Cake—the band’s first-ever double-album, if you can believe it—Pollard has released 100 albums since 1986’s Forever Since Breakfast. That’s one for…well, probably every musician with whom the former fourth-grade teacher has collaborated throughout his career. For the special occasion, he tapped GBV vets Doug Gillard and Kevin March—but not Tobin Sprout, sigh—as well as newbie Mark Shue and alt-country artist Bobby Bare Jr. In another first for GBV, each of the band members contributed to the songwriting.

In what is a GBV tradition of a kind, August by Cake is an album stuffed with songs that qualify as demos, half-baked ideas, and snippets, along with a handful of brilliant gems nestled in between. There’s “Goodbye Note,” a sing-song-y track that should probably open a future GBV concert or two. There’s “Warm Up to Religion,” a soliloquy that’s touching but, like so many of GBV’s best songs, ends too soon. And there’s “Sudden Fiction,” which has the hook-iest guitars on the record and brings back memories of the band’s brief major-label stint on TVT Records.

Elsewhere on August by Cake, the frontman continues his obsession with the big top on the atmospheric “Upon the Circus Bus,” the skronky “Circus Day Holdout,” and the acoustic “Amusement Park Is Over.” “We’re creating a society of cellphone-crazed, marijuana-smoking zombies,” a voice says at the start of “Packing the Dead Zone.”

But the situation isn’t so dire on August by Cake; by the time its seventy-one minutes are up, the record leaves a resin-free aftertaste. Sometimes I wonder, “Aren’t there a finite number of songs that can be written?” If Bob Pollard’s oeuvre is any indication, the answer is a definitive “No.”