Sometimes the best things are the ones that remain the same.
Menu

Sometimes the best things are the ones that remain the same. 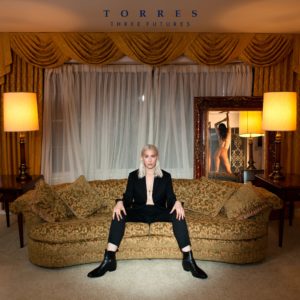 Mackenzie Scott, who performs under the moniker Torres, makes the rare sort of music that’s both stadium ready and achingly intimate. Her voice is assured and massive, yet it’s often the details that hold her compositions together. On her third LP, Three Futures, Scott embraces this duality and has created something both maximal and piercingly raw.

The album begins with an extremely strong triumvirate, with opener “Tongue Slap Your Brains Out” and the title track sandwiching “Skim,” the album’s first single. The first track is a delightfully odd composition, with Scott’s layered vocals initially backed by nothing more than electronic percussion. Guitars join the fray, wailing and bending to create an atmosphere equally caustic and intriguing. The track feeds off of this method, slowly building its environment with the addition of noises and melodic lines equal parts inviting and disorienting. Eventually, like the sun bursting through the clouds, a from-the-mountaintop chorus emerges, with Scott singing, “I know you never dreamed / I’d become a damn Yankee.”

Scott uses this structure to measure and pace much of the record. The title track, which immediately follows “Skim,” is a slinky number, Wild Beasts crossed with St. Vincent. It’s one of the album’s stronger songs, moving at a languid pace yet never coming across as nonchalant or boring. “You trusted me to love your parents,” Scott sings, before lamenting having “sunk into my tunnel vision.” Scott’s lyrics alternate between moments of regret and self-love, acknowledging the mistakes we make but refusing to let them get in the way of having a good-ass time.

One thing that could easily be overlooked when listening to the rich instrumental constructions on Three Futures is Scott’s voice. It’s thick and powerful, not necessarily ambitious with range but sitting comfortably in a zone that perfectly suits this music. “Helen in the Woods” is the album’s best track, mirroring her distinct voice with a biting, scathing half-time stomp in the chorus, affected by churning guitars and propulsive drums. Scott’s voice jumps to a yelp, evocative of the chaos she’s describing.

Three Futures has the potential to fly under the radar. The Torres project has been so consistently excellent, and Scott’s latest installment under this name isn’t a far shot from her first two albums. But sometimes the best things are the ones that remain the same. On Three Futures, Mackenzie Scott changes up just enough to remind us how great of a songwriter she is.