Long before it became a Disney blockbuster, “A Wrinkle in Time” was a book—and Meg Murry a heroine—familiar to brainy girls the world over.
Menu

Long before it became a Disney blockbuster, “A Wrinkle in Time” was a book—and Meg Murry a heroine—familiar to brainy girls the world over.

I met my oldest friend because of Madeleine L’Engle’s A Wrinkle in Time. She was the exotic new girl in third grade whose seven-year-old affections were coveted by every boy in class, and when I noticed her reading the book one day I said, “I love that book.” We’ve been friends ever since.

“Smart girls love Wrinkle in Time, this is just true,” reads a tweet from Anne Helen Petersen, BuzzFeed News’s senior culture writer. “A Wrinkle in Time is my favorite book,” said political reporter Sarah Kendzior, also in tweet form. “It’s what got me interested in authoritarian states.” The book enjoyed a spike in sales after Chelsea Clinton noted its influence in her childhood during a 2016 DNC speech. And this month, Ava DuVernay becomes the third woman and first black female ever to helm a $100 million budget film with the release of Disney’s Wrinkle in Time adaptation. DuVernay altered the race of several beloved white characters; most notably, protagonist Meg Murry is now half-black and portrayed by Storm Reid. (Certainly not to be confused with Kylie Jenner’s newborn daughter Stormi. Coincidentally, Wrinkle begins with the line, “it was a dark and stormy night.”)

The book is weird. Published in 1962, it’s technically a young adult tale about a thirteen-year-old girl tasked with saving the universe, but it also brims with complex scientific ideologies and ruminations on the nature of evil. You know, girly stuff. This was among the first science fiction novels to place a woman in the paramount role, and it retains a largely female-dominated fan base today (a rarity in the genre). Heroine Meg is bookish, wears braces, does square root calculations in her head, and has a dog named Fortinbras after a minor character from Shakespeare’s Hamlet. Her mother is a microbiologist, her father a physicist, and her five-year-old brother Charles Wallace is a world-weary telepath. There are no love triangles, there’s no Team Edward, and no foam fingers hoisted in support of Peeta over Gale. Intellectualism is both venerated and begrudged, as Meg and Charles are bullied for their brains in school.

As for the titular “wrinkle,” that refers to a means of travel via tesseract, a fifth-dimensional phenomenon by which you fold up the fabric of time and space (as you might wrinkle your skirt); Meg must tesser to another planet in order to find and rescue her father, who has been imprisoned. Few hints toward a light-hearted children’s romp there—and author L’Engle, who died in 2007, refused to distinguish between children’s and adult literature anyway, resenting the condescending “children’s-book writer” label so often thrust upon her. Still, she won the Newbery Medal for Wrinkle, the highest honor a work of fiction for children can be awarded. Likely a bittersweet victory.

Wrinkle is also—and forgive me if this offends—a very feminine kind of sci-fi, at least in the traditional sense of the word. Not that it’s for girls or girls prefer it (although historically, they do), but because it’s cozy, full of witchy mysticism. In the very first chapter, the scene is set in a New England October; there’s hot cocoa brewed in a roomy kitchen, a kitten purring on a bed, and an eccentric old lady who proclaims of a blustery evening, “Wild nights are my glory!” When our characters tesser and planet-hop, they converse with a satin-garbed personage called “The Happy Medium” who uses a crystal ball to peer at distant places and people (it’s a lady in the book, but DuVernay’s film has the role played by Zach Galifianakis); later, on planet Ixchel, Meg is mothered by a tentacled creature she nicknames “Aunt Beast.”

This was among the first science fiction novels to place a woman in the paramount role, and it retains a largely female-dominated fan base today (a rarity in the genre).

From what we’ve seen in stills and trailers, DuVernay has enhanced the book’s flamboyance on screen to near–Electric Kool-Aid Acid Test levels. She told Time, “Men who are doing sci-fi I don’t think are having as much fun in the makeup, hair and clothes as we did.” Indeed: She’s gussied up Oprah Winfrey, Reese Witherspoon, and Mindy Kaling (who play Mrs. Which, Mrs. Whatsit, and Mrs. Who, respectively) in shimmering eyeshadow, fluorescent wigs threaded with tinsel, and impractical ball gowns. In the book, these three immortal beings—who are billions of years old, frequently shape-shifting and spewing cryptic wisdom unto Meg—appear on earth as elderly women so as to blend in. A tad less glamorous than DuVernay’s trio, but still nurturing, feminine energies.

As goes the anecdote many a failed writer has glommed onto, Wrinkle was rejected more than thirty times by publishers before Farrar, Straus and Giroux agreed to take it on. On any “Best Of” science fiction list, you’re wont to find Frank Herbert, George Orwell, William Gibson, Aldous Huxley, Kurt Vonnegut, Philip K. Dick, and Ray Bradbury. But just three or four women will crop up—Ursula K. Le Guin, Octavia Butler, and Mary Shelley usually, and more recently (thanks, Hulu), Margaret Atwood—still, a gender imbalance is clear. Also: Shelley’s Frankenstein toggles between the perspectives of two male characters, and many of Le Guin’s books feature male protagonists, as she self-admittedly struggled with writing from a woman’s perspective. More recent additions to the canon include the female-authored Divergent and Hunger Games series, both focused on teenage chicks forced into battle amidst dystopian futures. But those books are YA, and not typically regarded as literature.

“Hard” science fiction, as defined by the inclusion of accurate scientific theories and physical laws, has long since been considered a boy’s club; while “soft” sci-fi, less concerned with technology or physics, interested more in the psychological and social elements of a speculative society, is accommodating to women writers (according to some). L’Engle falls somewhere in the murky middle: Wrinkle is an intimate personal study, depicting a family who love one another, would believe in climate change, and speak about God in comfortable if reverent tones. The story ultimately centers on a young girl’s search for identity in the face of encroaching conformity. 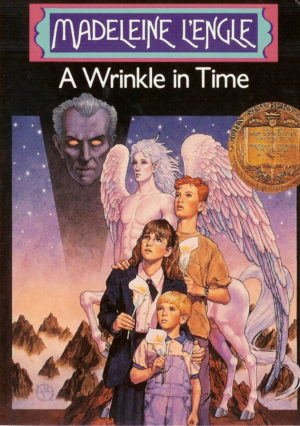 But L’Engle is unwilling to separate religion, science, and magic, addressing them as merely varied hues of the same bright reality. Though sci-fi will often dismiss religion in favor of cold hard facts or a more generalized spirituality, L’Engle is akin to Chronicles of Narnia titan C.S. Lewis in her Christian beliefs. An active Episcopalian while alive, she’s said the three “W” women in Wrinkle were meant as guardian angels, and one of the book’s most controversial passages puts Jesus on a list of “heroes fighting against” Evil throughout history alongside Leonardo Da Vinci, Michelangelo, Shakespeare, Madame Curie, and Einstein. (Some Christians found the comparison disrespectful—the nerve of comparing Jesus to artists and poets!) A pious sensibility sometimes becomes a bother in Wrinkle—corny language, characters becoming far too chummy far too fast—but it was, after all, written in the ’50s. The optimism is annoying but consistently practical. And religion never overrules science, or gets called upon as a convenient excuse for irrational behavior.

Science fiction offers commentary on technology, medicine, politics—and the sometimes painfully slow evolution of those things. The planet from which Meg rescues her father is Camazotz, a totalitarian regime where everyone has “given in” to the Black Thing, a.k.a. Evil itself (to be honest, the whole thing’s kind of vague). Forced into conformity—all the kids here bounce balls in unison during playtime, and if anyone gets sick they are disposed of—the planet is lorded over by an all-powerful dictator called IT, who exists in the form of a disembodied brain.

“It’s a good book for children to read now, growing up during the Trump administration,” Sarah Kendzior told me. “The rejection of conformity, the emphasis on compassion.” She’s called IT a “fascist monster,” comparing his brainwashing of Meg’s brother Charles Wallace to the “normalization” of Trump Times. “One of the scariest lines in the book is, ‘Just relax.’ Just give in, we’ll take care of you. Relaxing is much easier than trying to combat IT. That’s what happened to us as a nation—people had faith in institutions and checks and balances, but it comes down to individuals’ willingness to uphold those things,” Kendzior said. Lucky for her father, Meg takes responsibility, defeats IT, and rescues him by virtue of thinking hard and getting angry.

L’Engle is unwilling to separate religion, science, and magic, addressing them as merely varied hues of the same bright reality.

Another thing about Wrinkle: It’s really down with female anger. Meg is defiant and a bit surly, and not in a way most people find cute. When we first meet her, she’s just been in a tussle with some boys at school who insulted her brother, coming home bruised and bloodied. Still, her family accepts her, flaws and all—as does Calvin O’Keefe, a redheaded boy who (rather suspiciously quickly) grows fond of Meg and asks to tag along on her interstellar adventures. (My biggest gripe with DuVernay: She cast a plain old brunette as Calvin, a character known for his bright hair and freckles. Redheads are much-maligned and need representation, too.) Calvin is a good guy—dependable and more sensible than Meg—plus their burgeoning romance doesn’t interfere with her mission in the slightest.

Less than two weeks after the recent mass shooting at Marjory Stoneman Douglas High School in Florida that left seventeen people dead, MSD students had instigated a CNN town hall (where they questioned/dominated Senator Marco Rubio and NRA spokesperson Dana Loesch), pressured advertisers to leave the NRA (so far, many have), planned a National School Walkout, and raised millions for a march in support of gun control. Many of these survivors have also amassed thousands of Twitter followers, and continue to tweet at and put the screws to pro-gun names like Dinesh D’Souza, Tomi Lahren, Loesch, and Donald himself.

L’Engle knew and wrote about this kind of teenage power long ago, and would likely be chuffed to see it exercised like this today. In moments of peril, Meg discovers her supposed “faults” are what best serve her: She’s stubborn, prone to questioning institutions and authority figures, and can never shut up. Not everyone admires these traits—but in Meg’s impatience there’s passion and in her fury there’s ambition. She resists IT simply because she doesn’t have it in her to acquiesce. I’d take a high-strung, strong-willed girl who trusts her own perspective over a calm, complicit one who minds her manners any day. FL