With “Simulation Theory,” one wonders if Matt Bellamy realizes he’s literally last in line for this year’s retrofuturism trend.
Menu

With “Simulation Theory,” one wonders if Matt Bellamy realizes he’s literally last in line for this year’s retrofuturism trend.

The Philly-based five-piece encompasses the guitar-pop gamut, all the messy layers of human emotion, and a healthy dose of stars-and-stripes ephemera on their third LP.

The West Coast punks’ 1980 debut full-length stands as both an important historical document and a necessary, contemporary reflection of the world today. 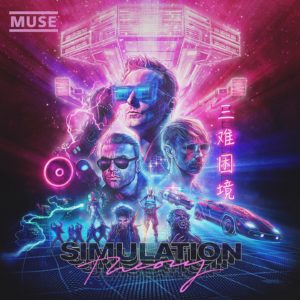 It doesn’t take a connoisseur to have noticed, by now, that Muse has cringe-worthy taste. But they’re also a band that has fashioned the sheer abandonment of taste into a tool for unadulterated awesomeness.

I know this because I have been a thirteen-year-old boy glued to my suburban home’s TV set, witnessing Chris Wolstenholme thumbing his bass with the synth-fuzz set to deadly voltage, Dominic Howard barreling down on his transparent toms as neon lasers shot through them, and Matt Bellamy in a lab coat scraping the Kaoss Pad he mounted straight into his guitar as a futurist whammy bar, still holding the same note of falsetto from the last chorus. All that sonic hellfire coming from just the three of them. This is what the Master Chief from Halo’s band would sound like.

Muse’s eighth studio album, Simulation Theory, is certainly not their best—but it still serves the same Cinnabon-esque function as every Muse album, which is tickling your brainstem with sensory pleasure until you’ve got to stop, disgusted by your own indulgence. For the cover art, they’ve enlisted Stranger Things poster artist Kyle Lambert for a sci-fi photo-montage painting, and coupled with the dark-wave synth chug of album opener “Algorithm,” one wonders if Matt Bellamy realizes he’s literally last in line for this year’s retrofuturism trend.

As for the music, the band has returned to producer Rich Costey—that’s his real name—who last worked with them on their most remembered albums, Absolution and Black Holes and Revelations. “Dig Down” is a shameless rehash of the wobbling riff from 2012’s “Madness,” one of their biggest-ever hits. It feels even lazier than when they made their unrecorded live outro to “Stockholm Syndrome” (a song from 2003) into the riff of a lead single for 2015’s Drones. The irony of that album’s title was that it seemed like a lifeless, automated version of the band throughout, and “Simulation Theory” is perhaps an even more ironic title, given its overt attempts at remodeling the past.

There is, however, one section of the album I must admit to being—strictly in the context of virile teenage imagination—flawless. That section begins with the glitching dubstep guitar solo at the end of “Break It to Me” that is equal parts Tom Morello and Skrillex, served atop a theremin, moves onto the Disney Channel acoustic bop of “Something Human” under Bellamy’s disturbingly intimate vibrado, finally ending with the wordless chorus chant of “Thought Contagion” that you’ll be howling with every hooligan at the next World Cup. But as a civilized adult, I recognize that “Get Up and Fight” is such a contrived gym teacher anthem that Mike Shinoda could have been called upon for notes on subtlety. “The Dark Side” and “Blockades” are Muse paint-by-numbers, a synth arpeggiator and some breathy verses vaguely about some class revolt.

But perhaps the most beautiful thing about Muse is that no matter how defiantly garish the content becomes, it’s never off-brand. We’re talking about Matt Bellamy here, who made a music video of himself falling through a hole in a planet that spits him out into deep space (where he’s still able to sing), all while sporting spiked bright-red hair and a studded belt. Every operatically belted cliché and LED light–pocked article of clothing is backed by a caliber of musicianship and attention to detail that cannot be overlooked—so all opinions aside, Muse’s success at bringing their sci-fi prog metal into the pop realm is no stroke of luck. They know they’re not as sophisticated as Radiohead, and they never aimed to be. Many bands can do many things better than Muse can, but no one can out-Muse Muse.