An Undead Elegy For the American Dream: On 300 Episodes of “Supernatural”

As of February 7, The CW will have aired three hundred episodes of the show that is a mournful and unwieldy sonnet on the myth of American greatness.
Menu

Film + TV
An Undead Elegy For the American Dream: On 300 Episodes of “Supernatural”

As of February 7, The CW will have aired three hundred episodes of the show that is a mournful and unwieldy sonnet on the myth of American greatness.

photo courtesy of The CW

Sam and Dean Winchester (Jared Padalecki and Jensen Ackles) are tall, comely brothers—who travel together tracking monsters. Their mother Mary was murdered by a demon and their father John, from there, abandoned efforts to give his sons the kind of childhood that allows kids to grow into people who know their own hearts; he trained killers. But they loved him—what else did they have?—and then he died, too. What happened after that has been detailed on The CW for a staggering three hundred episodes. This is the last show standing from The WB, a network that’s been dead for over a decade now, and when it premiered I was in ninth grade. Fourteen years later, I watched my first episode on a couch three thousand miles from my childhood home, and though I’d anticipated only a fount from which to make mean jokes on Twitter, I found something horribly tender instead.

Nobody told me that Supernatural—this crime procedural where codependent adults use credit card fraud to fund their road trip through haunted America; this strange romantic comedy with theological implications; this mood piece on stolen youth spraying out into an arrested perma-adolescence lousy with the bogeymen that star in kid’s nightmares—is literally just about trauma. I guess I should have known. What are monsters if not manifestations of cultural wounds, of the darkness inside regular people which, for all of human history, we’ve feared, pushed away, given names and mythologies to in an attempt to say, “this is not us”? What else could a life so buried in monsters be?

Nobody told me that this crime procedural where codependent adults use credit card fraud to fund their road trip through haunted America is literally just about trauma.

Last year, I quit my job and moved to Los Angeles. My sister and I drove here together, but after I’d put her on a plane, I was properly alone like I had never been before. I love and fear the freedom in that, and am happy in the solitude, and when I am not, I go to mass at the church across the street from my new house and join the sea of bodies speaking and moving as one in rhythms my muscles know like riding a bike. My lightly Catholic family finds this affectation odd, but it stills something in me. It was out here under trees I didn’t know from Adam—writing strange poems and fancying myself my own cowboy—that I let friends trick me into watching Supernatural. Had I known it is largely about trying, against reason, to find a way to believe that there’s a god, or at least that there’s a point, and that you ought to keep clawing forward trying to believe that, I might have watched sooner, but I can’t begrudge the timing. Recently, on another mild LA winter night, we threw a party, and while “a roomful of lesbians in earth-toned flannels yelling and drinking whiskey” could reasonably describe most social events that I attend, this one was to celebrate Dean Winchester’s birthday, and, as can be said of most biblical events, it was equally and inextricably both holy, and indicative of our all being probably a bit unhinged.

Fourteen years of one story is so much. I haven’t been anything that long, not even in this body, really—all new cells every seven years, you know. The show’s pilot episode sees Dean surprising Sam at Stanford. They haven’t spoken in years, but their father is missing. Sam has a law school interview coming up that week. It’s important, he insists defensively, but leaves with Dean just the same. Young Sam escaped and got four years of his own among the regular people with their appointments and mailing addresses; and he was capable of having that, knowing how to want that, because he grew up with an older brother who gave him the love it takes for a person to decide they have intrinsic value. Four years can contain galaxies. Dean had no one—he had indentured servitude to the family mission of chasing death, his pride and shame in that, and a parade of movies on motel cable where his interiority should be. Sam found a way to live like more than a ghost, but then his brother needed him, and he owed him the help, had been trained in how, and with the first toss of a shotgun into the trunk, the Sam Winchester who could have stayed in Palo Alto, practiced law, owned a dog, moved in daylight, was gone.

Over the course of three hundred episodes’ worth of chupacabras and shapeshifters, angels and demons, deaths and not-quite-deaths, crises of faith and the thwarting of an actual, biblical apocalypse, the show has unfolded in the midst of all its own noise to reveal an intimate character study. The initial archetypical depictions of Dean as tough-guy lone wolf and Sam the sensitive overthinker fall away almost instantly, and though the truth is something closer to the inverse, it’s still not so simple. A benefit of an interminable series run and minute ensemble—excepting Misha Collins’ angel Castiel, an incandescent delight and impetus for homoerotic torment that would make John Milton scream, none of the recurring figures have stuck in a meaningful way—is the space to color characters in intricate detail, and through those evolving portraits examine the different ways people respond to things they should not have survived.

All the markers of an all-American story are accounted for, right down to Dean’s cowboy obsession, but they come up tasting plasticine, and I don’t think that’s a fault.

Supernatural trades heavy in American iconography so overdetermined it plays as generic. It’s diner pies and flannel shirts. It’s interchangeable towns that look and bleed the same. Certainly, it’s the boys perched atop the too-easy phallic symbol of the 1967 Chevy Impala they got from Dad, the car they drive fast without seatbelts, in arching lines across the country, the only material proof that they exist, though it’s impossible to believe they’re keeping it legally registered. It’s the egoist’s melodrama disguised as working class martyrdom, of John vilifying Sam for leaving for college, and it’s Dean’s dear, cartoonish performance as the heteronormative horndog, overeager and ill at ease. It’s when the guys found out they had a secret half-brother and Dean was visibly stricken to hear John took this kid to a baseball game, which he’d never done with them.

All the markers of an all-American story are accounted for, right down to Dean’s cowboy obsession, but they come up tasting plasticine, and I don’t think that’s a fault. Sam and Dean zoom through patches of western Canada camouflaged as the heartland and my pulse is a Springsteen song, as beer-damp when it rattles in my chest as the brothers are when they park for the night in those liminal motels. Straight-forward protest song “Born in the USA” has been wrong-headedly invoked as a patriotic anthem countless times, but when I think of Dean Winchester, who at forty—forty! on The CW!—still cannot believe he’s more than his father’s hammer, or extend to himself any of the empathy that attends, and of Sam who almost got out, who couldn’t get out, who won’t ever, because the legacy of violence is inbred, I do hear an echo of Bruce’s recitation of a nation’s crimes: “End up like a dog that’s been beat too much / Til you spend half your life just covering up.” Evil will never be kept at bay, and whatever nobility there is in the trying, when your days are filled with the rat race of someone else’s war, the scraps left over are not enough to live on. 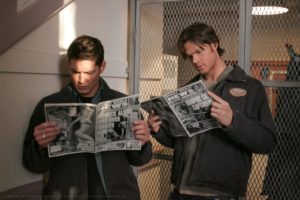 There is a moment in the show’s eighth season where Dean asks after teenage prophet Kevin Tran’s well-being. Kevin screws up his face and explains, “I can’t enjoy a world I need to save.” Dean looks as if he took a kick to the ribs, like he’d never dared consider that his bone-deep unhappiness is a feature, not a bug. Kevin was an ordinary kid before having this responsibility thrust upon him, so the difference rings clear, but Dean has no frame of reference, no sense of what real happiness is like with which to compare the muddy greys and purples of his pained existence. He’s never known a world of choice. Do I think he could be something adjacent to happy if they’d let him have a boyfriend? Yes, sure, but if anyone at The CW desires my input on that matter, they can please contact me directly.

In “Soonest Mended” the poet John Ashbery wrote, “To reduce all this to a small variant,  To step free at last, miniscule on the giant plateau—This was our ambition: to be small and clear and free.” To be small and free and clear is anathema to the ethos of American exceptionalism. It is the American way to valorize our hungers as if they prove strength, to want more, more. Supernatural has managed, in a monster show that airs on the network that does the horny Archies, to indict the lore that underpins the American Dream—that says labors will make glories—simply by having two white dudes with the world at their fingertips suffer consistently while trying to keep that world spinning. For all those pre-mapped desires of what a life should be—the white picket fence, fat wallet, and pleasure-pickled brain—the one fantasy left for the Winchesters is that someday they won’t have their finger in the dam. Instead of seeming grim, this humble hope offers an answer to a question I had long before I watched this show. If more will be never be enough, perhaps just-enough could be everything.

Fifty—or probably more like fifteen—years from now when a non-fictional apocalypse arrives, The CW will renew Supernatural again anyway, and in a patch of burnt-out California woods, I’ll watch on a retrofitted portable TV and continue to hope they can swing it. Get small, get clear. Be free somehow. What else is there? FL