Our non-human Oscar picks might be more awards-worthy than the actors who drank, ate, and wore them.
Menu

Our non-human Oscar picks might be more awards-worthy than the actors who drank, ate, and wore them.

We don’t have a host for this year’s Oscars, but why the hell did we ever think we needed one? Remember Clint Eastwood yelling at an empty chair during the 2012 Republican National Convention? Remember the fake baby Bradley Cooper snuggled in American Sniper? Remember A Wrinkle in Time or Aquaman or Peter Rabbit, 2018 films made up almost entirely of fugly computer-generated imagery? What I’m saying is: We don’t need Real Live People to have a good time.

That brings us to our list, in which we’ve paid homage to the inanimate objects who stood alongside lauded actors in every film last year, getting none of the credit and less of the glory. Some are props, some can be consumed by human mouths, and some are #fashion. But all are fundamental to Cinema.

Presenting the Best Supporting Inanimate Objects of the year. Warning: There are spoilers for 2018 movies you should’ve already seen. You philistine. 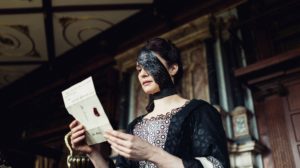 After Emma Stone’s devious character usurps Rachel Weisz’s role as Queen Anne’s favorite girl-toy, Weisz is put through the ringer: Emma drugs Rachel’s tea and then the latter falls off her horse and gets dragged through the forest, after which she emerges with a nasty cross-face scar. The Queen (played with whiny ferocity by Olivia Colman) is disgusted by her former lover’s battered appearance, so Rach covers her wounds with a black lacey ribbon that encircles her neck like a choker. It’s a lot weirder than an eye patch, and a lot sexier too. 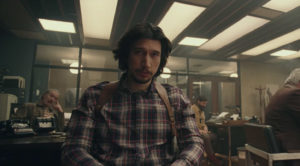 Adam Driver is an almost fiendishly attractive brute of a person. There’s something about his animalistic, galumphing nature a lot of ladies simply can’t get enough of. In Spike Lee’s BlacKkKlansman, he plays a Jewish cop who goes undercover as a member of the Ku Klux Klan; and he frequently wears a shoulder holster, presumably to hold his gun. Harnesses are having a moment right now: from Timmy Chalamet at the Golden Globes to Michael B. Jordan at the SAGs, men are strapping ’em on, and there’s something both oddly bold and mildly kinky about it. 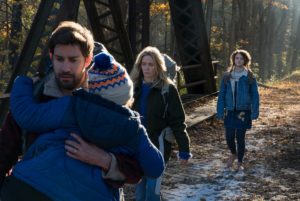 The nail on the stairs in A Quiet Place

There is an evil nail that lies in wait on the staircase of John Krasinski’s home in A Quiet Place, and it’s scarier than both the movie’s disappointing monsters (who hunt by sound) and the fact that Krasinki had unprotected sex with his wife in a world where screaming babies are literally a death sentence. First-time director Krasinski torments his audience by showing the wily nail several times before finally having Emily Blunt step squarely on it. Her heel plants into the rusty little f*cker as she’s trying to escape from a monster, so she can’t even utter a pained peep—if she does, she’ll be killed. And there are no tetanus shots in post-apocalypse land. The injury most likely cannot compete with Lego-foot, but it still inspires some sympathy.

If only you could order this at a bar. In Paul Schrader’s criminally under-Oscar-nominated meditation on spirituality and the slow destruction of planet Earth, star Ethan Hawke—who plays Reverend Toller—mixes up several deadly cocktails. To kill himself at the film’s conclusion (or does he kill himself?), Toller pours some Drano into a highball glass and drinks it; but the far more disturbing beverage comes earlier, when he wants to get drunk but also needs to assuage his stomach pain, and so pours Pepto-Bismol into a glass of whiskey. In what has emerged as the film’s most iconic image, the chalky Pepto blooms pink inside the amber liquor—a despicable co-mingling, but a potent one. 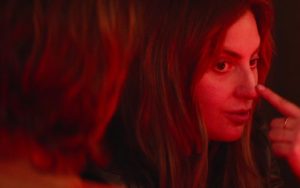 Lady Gaga’s nose in A Star Is Born

She’s an aspiring singer who’s been told she isn’t hot enough to “make it.” He’s a successful (if alcoholic) rockstar who says her large nose is beautiful, actually—and then slides his finger down it, a move many women find sensual but some find creepy, as he did not get permission to touch her face. Either way, Gaga’s nose is an insecurity, but she’ll be damned if she lets it stop her star from rising. (Note: I realize a nose is attached to a living, animated body, but it still counts for the purposes of this list because a nose by itself is merely a lifeless stump of cartilage.) 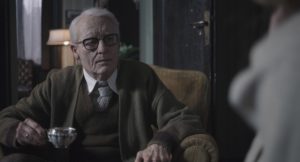 The prosthetic penis in Suspiria

In her dual roles as both the headmistress of a witched-up dance school and the eighty-two-year-old doctor Josef Klemperer who is investigating the creepy happenings at said school, Tilda Swinton’s old-man makeup—and prosthetics, including a fake penis she absolutely insisted upon having for the shoot—was so convincing that most viewers had no idea it was Tilda until the movie was over. When scores of people are fooled by a penis (which we get a pretty decent glimpse of, thank you Luca Guadagnino), you know it’s gotta be a good one. 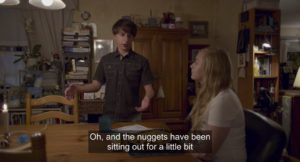 The most wholesome scene in Bo Burnham’s tender middle school story is the one where eighth grader Kayla hangs out with Gabe, a charming fellow who has prepared a delicious meal for them to share (he went to McDonald’s and bought chicken nuggets). She’s insecure and shy and has been burned in the past, but Gabe likes Kayla for Kayla, and desperately wants to make her happy—so he sets up a rainbow array of McD sauces to eat with the nugs. He also offers her whichever of his sauces she might prefer. After dealing with some truly sucky boys, Kayla is lucky to have found one who treats her with such respect. (Gabe, if things don’t pan out with Kayla, call me. In like fifteen years.) 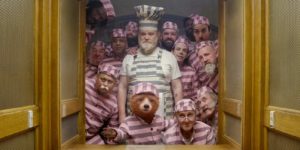 The red sock that dyes the prison laundry in Paddington 2

In one of the great film cuts of our time, poor Paddington Bear accidentally throws a red sock into a prison washing machine along with everyone’s gray-and-white jumpsuits, panics, then reassures himself, “what’s the worst that can happen?”—but the next thing we see is an entire cafeteria of pissed-off convicts clad in jumpsuits that are now baby pink, snarling and cracking their knuckles. The sock is a symbol, of course: these prisoners grow to love Paddington (who has been wrongfully imprisoned) in time, as he gradually finds a way to make their cells feel more like home, introducing tasty food and cozy decorations. The bear is an optimist who sees the world through rose-colored glasses—and men should wear more pink, anyway. 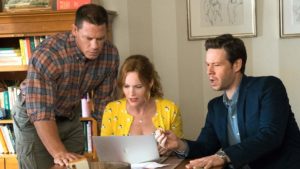 The emojis in Blockers

In a delightful teen-sex comedy, three single parents try to cockblock their three daughters, who’ve all agreed to lose their virginities on prom night. This particular scene sees the adults getting wind of their kids’ plans after snooping through their text messages—but they’re having a little difficulty parsing emoji speak. John Cena hopes his daughter has merely made an agreement to cook eggplant parmesan, but Leslie Mann knows the truth: eggplants mean somethin’ different to digital natives. The primary joy here comes from man-giant John Cena struggling (in vain) to interpret all of his daughter’s sexts as innocent invocations of friendship. FL