A Day with Local Natives’ Favorite Side Projects

A Day with Local Natives’ Favorite Side Projects

Talking cycling, soccer, and art with the SoCal indie rockers.

For non–Los Angeles natives, a quick note: LA can be very hard to navigate without a car. Neighborhoods are spread out, and in many places bike lanes are non-existent, which means everyone has to share the road. But none of that matters to Matt Frazier. Thanks to a newfound dedication to self-care following his thirtieth birthday, Local Natives’ drummer quickly found himself embroiled in the lycra shirt and helmet life.

“I think for me, the touring lifestyle can start to be unhealthy,” Frazier says. “You’re sitting a lot, you’re traveling, maybe you’re not eating super healthy, staying out late. I’m trying to counter that with a little exercise, so I got into running. And I had some friends who were into cycling, which I thought would be a nice counterbalance to running.”

Wheels won over feet, and even now Frazier says starting his day with a spin through Elysian Park—particularly when he can investigate roads off-limits to cars—ranks among his favorite activities. Now, his list of places he’d like to explore keeps growing. 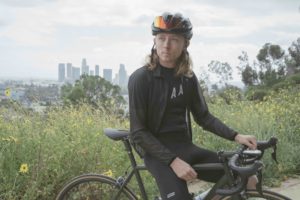 “I’d love to ride somewhere in France, like Alpe d’Huez, where they do the Tour de France. I feel very fortunate to be a touring musician. Now I’m going to take my bike and travel more…I really feel very fortunate to have found this hobby. I’ve had so many random experiences that I would have never had otherwise.”

Like Frazier, Local Natives vocalist Taylor Rice attempts to counter his sedentary daily life with sports—namely soccer, a sport he and his dad-turned-coach have enjoyed since he was a kid. Watching is fun in groups, Rice notes (“There’s a bar I’ll go to, to watch the games, but I don’t set the alarm for six a.m.”) although his heart is more into playing.

“The touring lifestyle can start to be unhealthy. You’re sitting a lot, you’re traveling, maybe you’re not eating super healthy, staying out late. I’m trying to counter that with a little exercise.” — Matt Frazier

“To be able to go run and feel your body and work with other people—it’s truly an amazing thing,” Rice says. “As a musician, playing soccer is really an incredible outlet for getting to do something totally different with your brain and body.”

Though he’s often away from Los Angeles, the midfielder (“They’re not the ones who are scoring, they’re making it happen for those who are making it happen,” he explains, offering a primer for the sports adverse) has found a community of like-minded players. A few of them even share his day job.

“I play in this men’s league that plays right near Griffith Park,” Rice reveals. “It’s seven on seven. The team counts M83’s Anthony Gonzalez in its ranks. I also made one of my best friends through soccer, who was later one of my groomsmen.” 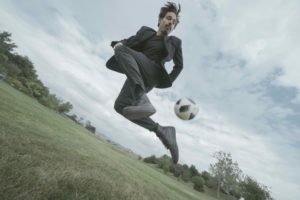 Rice says the band managed to play soccer with The National’s Aaron Dessner while they were recording their third album, Sunlit Youth. Thanks to an app that helped them find games of pickup in Brooklyn (where they were living and recording at the time), there was no shortage of play. However, as a band, Local Natives have yet to participate in regular games on the road.

“I was just thinking we should definitely do that!” shouts Kelcey Ayer, the keyboardist, when the idea is brought up.

“Really, are you in?” Rice replies, suddenly excited. “If you’ll play on tour that would be amazing.”

“As a musician, playing soccer is really an incredible outlet for getting to do something totally different with your brain and body.” — Taylor Rice

Not every band member’s side-passion is athletic. When bassist Nik Ewing shows me a piece of his artwork—a somber, Power, Corruption & Lies–style clutch of flowers, constructed from ripped up magazines—he beams with pride, carefully outlining his technique. But when I ask which medium, music or art, requires more emotional labor, he becomes extremely pragmatic. To hear him tell it, it’s a stroke of fate that he’s been allowed to have two careers run side-by-side, even if one comes with more (positive!) baggage.

“I show stuff in galleries now and people buy it,” he says. “The new Local Natives album, there’s a lot of people who have expectations on what it should be or what they want it to sound like or something. But when I’m making prints or art, nobody at a gallery gives a fuck that I’m in Local Natives. They just like it or they don’t. Nobody’s like, ‘Nik’s 2019 work is so derivative of his 2017 work.’” 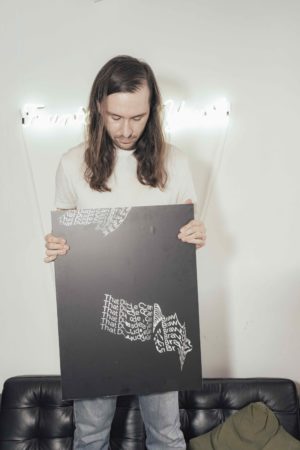 Ewing still occasionally dips into creating visuals for Local Natives—including signing off on the bold typography of posters for their sets at Red Rocks and the Greek Theatre in Berkeley, and masterminding a print full of visually twisting words based on an unreleased song, originally titled “That Dude Can Brawl.”

“When I’m making prints or art, nobody at a gallery gives a fuck that I’m in Local Natives. They just like it or they don’t.” — Nik Ewing

“It came out of the DIY punk ethos,” he says of the connection. “I don’t really trust someone to make an album cover or flyer. In a sense, it is kind of branding. But it was more like I always viewed music as more than, ‘Here’s the ten songs.’ You’re creating this world. So I’m not going to give it to someone I don’t know and say, ‘Can you sum up these songs with a visual that people might identify more with than the songs themselves?’”

Ultimately, Ewing says he’s just happy to have a career in two worlds that can feed both of his creative impulses. It’s an unusual position to be in.

“Music was my passion, and there’s no real reality where I’m going to make a living in music,” he explains of his initial mindset. “I didn’t go to art school, but I started taking graphic designer jobs and art director jobs. I was paying my bills through design and art. Then, luckily, people started caring enough that I could live off music. It was just so weird! I never thought that was possible.” FL