It was a sweltering hot day in Arizona when the alt-rock tour crashed the mainstream.
Menu

It was a sweltering hot day in Arizona when the alt-rock tour crashed the mainstream.

Attitude and intensity. According to MTV’s Kurt Loder, those were the qualities shared by the artists featured on the very first Lollapalooza tour in 1991. The idea of uniting this otherwise disparate lineup was the brainchild of Jane’s Addiction singer Perry Farrell and a couple of booking agents way back in the early ’90s.

“The deal is that we were supposed to play the Reading Festival, and we never got to because I got sick,” Ferrell told the Arizona Republic in 1991. Jane’s Addiction was on its last leg, planning a farewell tour. With the band stewing in their UK hotel instead of hitting the concert, booking agent Marc Geiger went to Reading and the idea was sparked.

“I went on to the festival the next day and had an amazing time,” Geiger told Chicago Sun-Times, “and we go back to the hotel, where the band is sitting around pretty depressed, and said, ‘Man, you should have seen this. This is what we should try to do with the breakup tour.’ Perry said, ‘Absolutely,’ and we sat in the lobby sketching out the format and making lists of bands… This being Jane’s Addiction, there was a lot of interesting stuff going on. One day a while later, Perry called me at one a.m. and said, ‘I’ve got the name!’ He’d heard it on a Three Stooges episode.” Thus, Lollapalooza was born.

The plan was for it to be a one-time tour marking the end of Jane’s Addiction. “I wanted a longer lineup, just because I wanted to have a wilder, bigger party,” Farrell said. “If it’s a farewell, then let’s invite some of our musical friends and peers. Nothing was supposed to come of it, you know. I had no intention of doing it again. I mean, the thing was over and William Morris and Marc and these guys are all really enthusiastic and saying, ‘We think we can get the Red Hot Chili Peppers for next year!’—and I went, ‘Wait, what? Next year?'”

That fateful first Lollapalooza kicked off on July 18 in Chandler, Arizona, at Compton Terrace. The stacked lineup included Siouxsie and the Banshees, Living Colour, Nine Inch Nails, Ice-T, Butthole Surfers, and Henry Rollins. It was a sweltering hot day, with temperatures in the triple digits. Ferrell was feeling the pressure.

“I kind of feel like I started this thing, so if it sucks, really, it’s on my shoulders,” he told MTV at the time. From most of the artists’ perspectives, that first day was a success. Both Ice-T and the Butthole Surfers were visibly excited after their sets in the MTV clip above.

It was a rough ride for Trent Reznor and Nine Inch Nails, however. The spiking temps caused the band’s gear to overheat and crash, forcing them to abandon the anticipated set after just two songs. “We’re officially the first casualty of Lollapalooza,” Reznor deadpanned afterwards.

Jane’s Addiction played a full set, but it ended with the band coming to blows. “The fight continued off stage,” revealed Andy Cirzan, vice president of Chicago’s Jam Productions. “There was some definite round-housing going on. I don’t know if anyone landed a punch, but I specifically saw some punches flying as they left the stage.”

All these years later, Lollapalooza has evolved into something entirely different. Now situated in Chicago as a four-day festival, it’s still among the most popular annual music events in the world.

This year, Lolla is set for the weekend of August 1, with headliners including The Strokes, Childish Gambino, Ariana Grande, and Twenty One Pilots. Buy your tickets here. 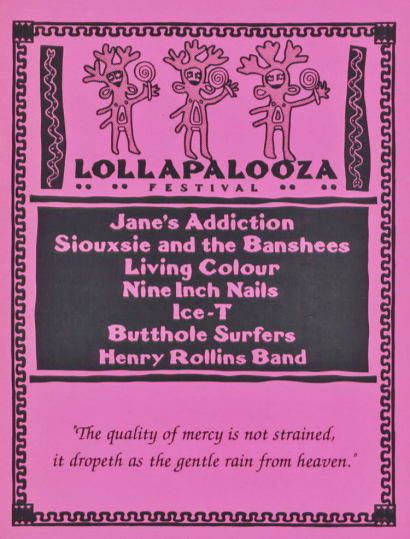