An incidental enrollment in a performative poetry class led the Chicago artist to a career in music.
Menu

An incidental enrollment in a performative poetry class led the Chicago artist to a career in music.

Alex G, God Save the Animals

Alex Giannascoli’s latest has a density to its proceedings that his previous albums lack—all while maintaining the quirk and intimacy of the bedsit recording proposition of his project’s origin.

Jamila Woods had an unconventional education. The eldest of four children, the poet/singer/songwriter shifted from institution to institution in her hometown of Chicago. She went from an Afrocentric school to a Jesuit Catholic School, but it was Woods’ educational experience at Gallery 37 that largely determined the trajectory of her life.

An artist apprenticeship that pays teenage students to do some form of art during summer break, Gallery 37’s program can also extend to afterschool during the academic year. It was during her first summer with Gallery 37 that Woods was exposed to performance poetry.

“I didn’t actually choose that program,” says Woods. “I didn’t even know what performance poetry meant. I had to choose three options. I chose singing, theater, and performance poetry. It was the program I got into. I was disappointed at first, but ended up loving it. It was a really cool turning point when it became something I wanted to continue to do.

“We went on a field trip to an open mic,” she continues. “That was the first time I performed in front of a bunch of people my age and felt like I was really being listened to.  I didn’t have that experience at my high school, which was amazing academically, but wasn’t very accepting or creative.” 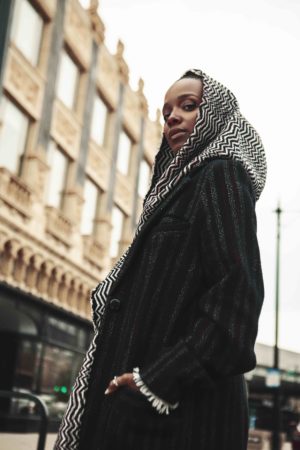 In 2015, a  life-shifting event occurred for Woods: she won the Poetry Foundation’s Ruth Lilly and Dorothy Sargent Rosenberg Poetry Fellowship, which came with a $25,000 cash reward. This allowed Woods to focus on her art. The following year, Woods’ was featured on Chance the Rapper’s “Blessings,” as well as on Macklemore and Ryan Lewis’ “White Privilege II,” which brought attention to her unique voice. That same year, she released her acclaimed debut album, Heavn.

It was through Gallery 37 that Woods was introduced to the concept of teaching artists—and to Young Chicago Authors, where she is now Associate Artistic Director. She is also an organizer of Louder Than a Bomb, the youth poetry festival that YCA puts together. Additionally, Woods is a founding member of Teaching Artist Corps, as well as a member of multi-racial, multi-genre poetry collective Dark Noise. She also co-edited the second volume in the BreakBeat poet series, Black Girl Magic.

“At YCA we would read and listen to a lot of hip-hop and compare it with poems. We would see the lyrics of a Chief Keef or Common song on the same level as a poem by Carolyn Rodgers or Patricia Smith.”

“When making the album, I was thinking about the idea of hip-hop and having this space of learning,” Woods recalls. “At YCA we would read and listen to a lot of hip-hop and compare it with poems. We would see the lyrics of a Chief Keef or Common song on the same level as a poem by Carolyn Rodgers or Patricia Smith. Thinking of it like that, my music can also be a learning thing, or a space where someone can ask, ‘That song “BETTY,” who is that about?’ I was especially thinking about the songs when young people are listening to them. How can this be a moment where they can learn about someone they might not have learned about at school?”

She continues, “I never would have been introduced to Nikki Giovanni or Gwendolyn Brooks in high school,” Woods admits. “A lot of schools have great curriculums and great teachers who seek out work that their students feel reflected in, but the overall culture of my school wasn’t like that. I don’t think I would have been as passionate about poetry if there hadn’t been the countercultural space of learning that I found through Gallery 37 and YCA, where I could direct my own learning and have agency. It gave me this freedom and this sense of poetry being something I could do.”

Some of the songs on Legacy! Legacy! indirectly found their start at YCA. Along with one of her co-teachers (and partners in Dark Noise), Fatimah Asghar, a prompt Woods gives her students is to “cover” a poem. This is much like writing a poem inspired by another poet’s work using the same theme or a similar topic—but from your perspective. Woods took this prompt on “GIOVANNI,” which is a cover of Nikki Giovanni’s poem, “Ego Tripping,” but as a song. 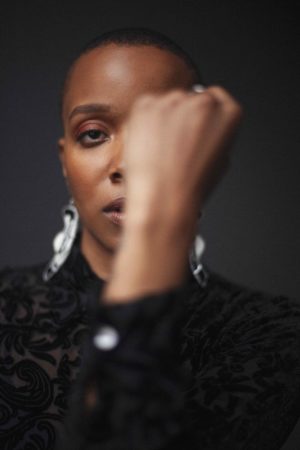 Chicago producer Slot-A is behind the well-matched beats and ’90s grooves for the majority of Legacy! His production is not only the perfect companion to Woods’ emotive tone, but also to the sentiments of the songs. “Slot-A just sent me a folder of beats,” Woods remembers. “Once I started realizing what the concept of the album was, there were crazy drum patterns that I definitely heard Miles in, then what I thought was guitar, I heard Muddy on that one. I have four songs I had written to his beats without even meeting him. I thought, ‘I have to start doing sessions with this person because we seem to be on the same wavelength.’

“We started making music from scratch in a more intentional way,” she continues. “I want to write a song named after Octavia Butler so we would spend a day reading a bunch of her stuff, talking about her, watching videos or whatever we could find to research the person, and then make the beat based off of being in that headspace.”

By the end of the new album, Woods was able to give concrete music direction to her Heavn collaborators and fellow Chicago residents, Peter Cottontale and oddCouple who provided the beats for “EARTHA” and “BETTY,” respectively.

“I was especially thinking about the songs when young people are listening to them. How can this be a moment where they can learn about someone they might not have learned about at school?”

Woods keeps her activities close to Chicago, where she still resides, another life decision she came to through her educational experience, this time at Brown University. “I got advice from a mentor who visited our senior class,” she says. “I asked them if I should move to New York or LA. They asked me where I was from and I told them about Chicago and YCA and everything. They said I already have a great community. In these other cities, I would have to start from scratch and probably be very broke and have to do an unpaid internship. They kept it very real and I felt privileged to be able to come home to a place that wanted to hire me, and being able to build from being a teaching artist, which I think is the ideal career path for someone who wants to be an artist and is just starting out.”

It’s a long time from when Woods started out, but she still makes YCA a priority. In fact, she is in her fourth week of twenty sessions with Bomb Squad, a five-week summer apprenticeship for twelve students who made it through the rounds of Louder Than a Bomb. Her schedule permitting, she visits high schools to play her album and speak about the people that inspired it, with the intention of giving students access to what they might not be exposed to otherwise.

“It was necessary for my personal development for me to have other experiences during school,” she concludes. “When we would get together at Gallery 37, it was all the weirdos from our respective schools who were now together. We felt free to be ourselves and talk about the nerdy poetry stuff we love. That was very affirming.

“But I’m grateful for all my school experiences. They definitely shaped me in different ways. At each school, there was one extroverted person who would decide I was going to be their best friend. I always had one ride-or-die friend. I need to write a poem about that.” FL