In Conversation: The B-52s Are Still Sassy After All These Years

Fred Schneider walks us through forty years of the band, from their first “SNL” appearance to entertaining crowds of a million.
Menu

In Conversation: The B-52s Are Still Sassy After All These Years

Fred Schneider walks us through forty years of the band, from their first “SNL” appearance to entertaining crowds of a million.

Fred Schneider is not impressed. Well, not easily, anyway. Such was the case when I connected with The B-52s frontman on the occasion of the fortieth anniversary of the band’s self-titled debut earlier this year. To mark the achievement, the group spent most of the summer on tour, with North American dates stretching into November.

He has a good reason to be blasé: Schneider’s quirky little group out of Athens, GA, has now sold more than twenty million albums, played shows all over the world, and permeated public consciousness with enduring songs and pop cultural touchstones like “Rock Lobster” and “Love Shack.”

With the band’s first-ever official history book due for publication in 2020, and a forthcoming documentary executive-produced by Fred Armisen, there’s a lot of territory to cover in a slight fifteen-minute phone interview. But Schneider was polite and cordial, indulging my stroll through B-52s history. Touching on everything from their first SNL appearance, to being a sensation on black radio in Detroit, to how they “inspired” the Talking Heads to get funky, the living legend pulls no punches here. 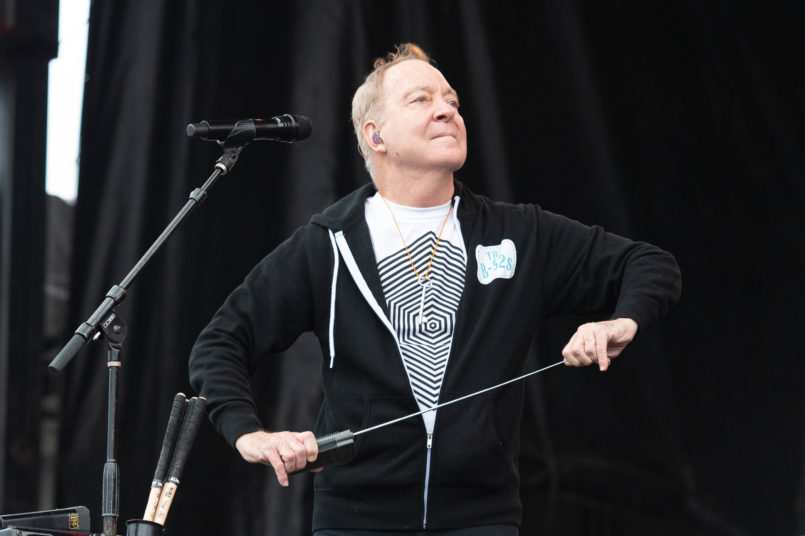 Let’s start at the beginning. What was the scene like in Athens, Georgia, back when the band first got together?

There was no scene. There was one other new wave group in Atlanta before us called the Fans, but Athens was basically a Southern boogie and beach music town. Very oriented toward the fraternity and sorority scenes, which we definitely were not a part of. We had a whole network of friends that we hung out with. Most of us didn’t have phones. We’d just ride our bikes and see what was going on that night. We had low-paying jobs.

It was fun. It was quite different. I lived in a dump. I mean, I woke up one morning and there was a foot of water in my basement apartment. It definitely was not luxurious, but we had a good time.

What do you remember about the first B-52s show?

“I was just nervous as hell. I think everyone else was, too. We weren’t camera-ready like most kids today. That wasn’t us. We were new-wavers. Not prepared for mainstream anything.”

That was at my friends Greg and Julia’s house in Athens in 1977. We were in the foyer, and everyone was in the dining and living rooms dancing. We played to a reel-to-reel tape. We had four or five songs, so we did the same set twice.

Do you recall the moment when you realized that being in The B-52s was your job?

When we signed with Warner Brothers, I guess. One minute I’m washing pots and pans at the El Dorado, and the next week I’m flying down to the Bahamas. It was great.

Was it a culture shock going from Athens to Nassau to make your debut album with Chris Blackwell?

Chris wanted us to just set up as we would as a band and record. Then we’d go back and add more vocals in the booth. We basically did it in three weeks. We’d performed all of those songs so many times. From what I remember, we recorded six days a week. When they were mixing, we’d go to town, Chris would take us out on his boat. It was great. Got sunburned a lot.

In 1980, The B-52s appeared on Saturday Night Live for the first time. That had to be such a big moment for the band.

We were deathly afraid. We’d never done TV before. I was just nervous as hell. I think everyone else was, too. We weren’t camera-ready like most kids today. That wasn’t us. We were new-wavers. Not prepared for mainstream anything. It changed everything for us. Our record was going off the charts, then all of a sudden it goes back up. “Rock Lobster” almost made the Top 40. Our record went platinum the next summer.

In the early ’80s, The B-52s were huge in Detroit’s black community. Mike Banks of Underground Resistance has shouted the band out for helping stop gang violence. Pioneering radio DJ Electrifying Mojo even had you live on his show.

Mojo was great because he really liked Mesopotamia and was playing it on it his show. Our ex-manager, for reasons I think were suspicious, asked why we wanted to change our popularity. I said we want everybody to like us. I like soul and funk better than I like rock and roll, so who cares? And then what does he do? The next thing you know, his other band, the Talking Heads, comes out with this whole funk thing. We were used to promote them. I mean, I love Chris, Tina, and Jerry.

Is that what happened with things breaking down between your band and David Byrne when he was producing Mesopotamia?

I don’t know about that. I just know that it was suspicious why our ex-manager didn’t want us to appeal to the African-American community when that’s basically the music I listened to, along with new wave and funk.

The B-52s had gone through so much personal and professional drama by the time you released Cosmic Thing in 1989. How quickly did you realize that record wasn’t just a hit, but something even larger?

“It was suspicious why our ex-manager didn’t want us to appeal to the African-American community when that’s basically the music I listened to.”

Well, “Love Shack” was really well received on college radio. We were told it was too weird for commercial radio. So while the band did soundchecks, I went with our A&R person to different radio stations around the country and got them to play it. It really resonated once they started playing it. The song never made it to number one because of Milli Vanilli and Paula Abdul, who were both accused of not singing those songs. That had a lot to do with it. I had to hit the bricks, go to radio stations and beg them to play it. That’s how “Love Shack” became a hit. I thought it was the most commercial thing we’d ever done.

You worked with Nile Rodgers and Don Was on that album. How would you compare them as producers?

Don Was wasn’t as big then as he became. Comparing them is apples and oranges. Both really just dedicated. Don will kick off his shoes, is more laidback. Nile was more serious. He was all about the big payoff with a song’s chorus. As you can see, you can’t forget Chic choruses. Everything sounds amazing. They were both a joy to work with.

Is there a special B-52s moment over the past forty years that stands out to you personally?

I got really choked up when we were inducted into the Georgia Music Hall of Fame. They had one of those lifetime achievement videos, and that’s what choked me up. Being in a real music hall of fame, not a commercial one. Also playing Earth Day in Central Park to a million people back in 1990. That was pretty special. FL