LIVE, IN PHOTOS: Courtney Barnett at The Stanley/Overlook Hotel

LIVE, IN PHOTOS: Courtney Barnett at The Stanley/Overlook Hotel

The Aussie singer rocked the legendary location inspo for Stephen King’s “The Shining.”

This past weekend, the tour found itself at The Stanley Hotel, the real-life inspiration for The Shining’s haunted Overlook Hotel in Stephen King’s seminal novel. Located in the shadow of Rocky Mountain National Park, the Stanley looms over the town of Estes Park in northern Colorado.

Opened in 1909, the property had fallen into disrepair by the time of King’s fateful stay in the 1970s. Drawn there on a tip about a pet cemetery (that would also inspire Pet Sematary, and remains on the grounds to this day), King and his wife spent the final night of the season as the hotel’s only guests. Wandering the halls, he famously claims to have encountered The Stanley’s specters. 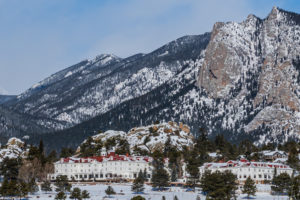 Fueled in part by the popularity of The Shining, The Stanley has since been restored to much of its former glory. Dissatisfied with Kubrick’s classic 1980 film interpretation (which had no direct connection to The Stanley), King returned to film his own made-for-TV version at the original locale inspiration in the ’90s, remodeling it in kind.

During King’s visit, the concert hall didn’t even have a roof. In the last couple of years it has been fully rebuilt to host concerts and events, and now the otherworldly ballroom feels like a place outside of time, with Tim Burton–esque tentacled light fixtures and a Twin Peaks Black Lodge vibe, plus giant blood-red curtains evoking The Shining‘s elevators of blood. The historical building also still retains a trap door on the stage once used by illusionist Harry Houdini.

RELATED: 100 Percent Happy: Courtney Barnett Is Letting It All Go

This night saw a conversational illusionist take the stage, with Barnett illuminating her seemingly meandering lyrics with stark emphasis. The slowed-down pace shone on tracks from 2018’s Tell Me How You Really Feel, “Need a Little Time,” and “Walkin’ on Eggshells,” while the audience was apt to join in a “Sunday Roast” sing-a-long. 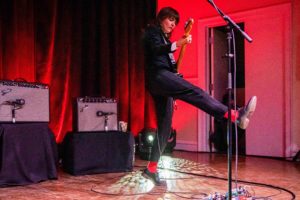 Accompanied on the tour by opener Hachiku’s Anika Ostendorf, the Milk! Records signee’s dreamy songs set the mood, as snow fell gently outside the hall’s windows. On Ostendorf’s last night on the tour, the two shared on-stage cheers and also attempted to auction off a leftover bagel in an effort to save on return luggage space.

At 7,522 feet elevation, “Elevator Operator” called for a well-placed deep breath break midway through. Other highlights of the set included “Let It Go” from Barnett’s collaborative album with Kurt Vile, Lotta Sea Lice, as well as covers of the Hank William’s country standard “I’m So Lonesome I Could Cry,” The Lemonheads’ “Being Around,” and set closer, Gillian Welch’s “Everything Is Free.”

While no ghosts made their presence known during her set, Barnett gave the audience chills all on her own. As we excitedly await new music, her next scheduled concert is another special set this Valentine’s Day in Los Angeles, billed as “Courtney Barnett and Friends,” which will benefit the Newport Festival Foundation.

See more pix from the show below.