Thundercat, “It Is What It Is”

Reviews
Thundercat, “It Is What It Is”

Thundercat continues to alchemize his inimitable style as a honeyed singer, whipsmart producer, and lithe bassist. 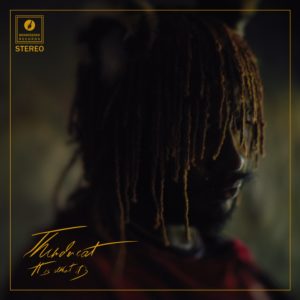 The ’80s science-fantasy cartoon ThunderCats was always a superb namesake for the music of Stephen Bruner, a.k.a. Thundercat. He wields his bass like ThunderCats’ legendary Sword of Omens—the headiness of a jazzman and the heart of a funk star in one mighty instrument.

His bass cut through the production on Kendrick Lamar’s 2015 classic To Pimp a Butterfly and it will appear again on future albums for Lamar and Herbie Hancock. Bruner’s weapon of choice commands the listener’s attention on his solo releases, starting with 2011’s dense jazz-fusion enigma, The Golden Age of Apocalypse. Fast forward to his fourth album, It Is What It Is, and Thundercat continues to alchemize his inimitable style as a honeyed singer, whipsmart producer, and lithe bassist.

The gliding jazz-funk beats on IIWII are thematically reminiscent of Bruner’s previous efforts, particularly 2013’s, Apocalypse. Both full-lengths are shaded by the deaths of close friends; Apocalypse was influenced by the drug-related passing of the jazz pianist Austin Peralta and It Is What It Is finds Bruner working past his personal demons after the sudden passing of Mac Miller.

Whereas 2017’s Drunk wrestled with substance abuse, It Is What It Is battles with the acceptance of Miller’s death. It begins with Bruner zooming to the outer reaches of his psychedelic soul in an interstellar triptych (“Lost in Space / Great Scott / 22-26”) and eventually returns home with the final title track, as Bruner calls out “Hey, Mac.” Fittingly, “It Is What It Is” was the first song Bruner recorded for the album. There is light and humor to be found here as well, but Thundercat plays it like a comedian with a tear rolling down their cheek after slaying an audience with a tight five.

Thundercat’s idiosyncrasies, bold fashions, and geek culture knowledge are most apparent on the outstanding single, “Dragonball Durag.” It’s a cassette tape–warped funk earworm and Bruner cloaks it in fluorescent melodies. Its best lyric drops early: “I’ma keep on all my chains, when I’m making love to you.” As with the best comedic performers, he has a firm grasp on the value of lampooning the braggadocio that crowns the funk genre as he gilds it in the same breath.

Thundercat understands that kind of winking drollery elsewhere. For example, “Overseas” grabs plenty of frequent flier miles in this area with a flight attendant interlude by comedian/rapper Zack Fox. It Is What It Is also downshifts into grave realities without taking too much of a hit in terms of overall sequencing. Those realities are hard to deny on the Ty Dolla $ign and Lil B–featured track “Fair Chance.” The Lil B bridge speaks to the death of Mac Miller and is a standout. His lines hit just as Thundercat’s gliding fretwork melts down into a smooth and soulful lament for a friend: “My emo-o-o-otions/ Give me a sip of that potion/ no, my heart is not broken/ but I feel like it’s open/ please somebody do surgery/ tell the doctor come work with me.”

Bruner is at his best when counterweighting his albums with jazzy introspection (“I Love Louis Cole,” which features Louis Cole) and drenched slabs of funk swagger (“Funny Thing”). He’s improved as a lyricist to match his production savviness, too. This “Black Qualls” line sticks to the back of the brain like a barroom dart: “No more living in fear / if we don’t talk about it / on the web.” It has ample resonance this year with the world’s growing coronavirus fears, but the track’s quality also stems from a solid trio of collaborators: ’80s funk-soul icon Steve Arrington, neo-soul guitarist Steve Lacy, and rapper Childish Gambino. They all lounge deep in the pocket of the groove.

The acceptance of Mac Miller’s death turns to musical resilience by the end of It Is What It Is. As a result of this pivotal life shift, it’s also a tauter release, only topping out at thirty-seven minutes. On earlier albums, Bruner noodled on ideas like a Pokémon trainer picking his best battlefield options—now he’s ready to attack. Bruner’s passion for cult movies, video games, and Dragon Ball Z create a treasure trove of experiences seeping in around the edges for the thirty-five-year-old producer/songwriter. He’s just getting started.