The Wonderful World of Ho99o9

Eaddy and theOGM trace the lineage of conservative fear-mongering in music to the present day, which sees the release of the punk-rap duo’s politically charged “BLURR” mixtape.
Menu

The Wonderful World of Ho99o9

Eaddy and theOGM trace the lineage of conservative fear-mongering in music to the present day, which sees the release of the punk-rap duo’s politically charged “BLURR” mixtape.

Ho99o9’s latest video project channels their experiences in 2020 into a hair-raising sensory overload. The hardcore industrial punk-rap duo from New Jersey have been pushing the envelope since their formation in 2012, ramping up songs such as “United States of Horror” or “Pigs Want Me Dead” with supercharged visuals. In the full-length video  for their 34-minute BLURR mixtape, classic scenes from Nightmare on Elm Street, Rob Zombie’s Firefly series, and wrestler Lex Luger collide with news clips of police brutality, COVID-19, Charles Manson, and 9/11. For Ho99o9’s members Eaddy and theOGM, life as young Black men in America can easily be paralleled with a filmmakers’ darkest fantasies, where one overstimulating image quickly replaces the next.

“Our concept with BLURR was that so much has happened this year so far,” says theOGM, joining Eaddy on a Zoom call from their home in LA. “With the way the internet and technology are changing things, everything is a blur. Before George Floyd, people forget that just last year two similar cases happened. Kobe Bryant died earlier this year, and that shit is a blur to people. It’s not even in the conversation anymore, and the election is coming up too. It’s an overload, man.”

The BLURR video opens with Barbara Walters’ introduction to a special episode of 20/20 from 1987, when reporter Stone Phillips investigated the “ghoulish images and violent theatrics” of heavy metal. Staring doe-eyed into the camera with a look of exaggerated concern, Walters cranks her fear-mongering tactics up to eleven and asks, “Is there a message that may be too loud for us to hear?” The members of Ho99o9 know the conservative media have been trying to scare parents about their kids’ musical obsessions since before the days of Black Sabbath. As long as artists speak freely with a style of music that’s deemed aggressive, someone will try to suppress them.

“It’s just like kids today loving trap music,” says Eaddy. “Parents think their children will grow up to be outcasts, not go to college, and not have a good job. Back in the day I remember seeing a story about how a Judas Priest song made these two kids commit suicide. They said if you play the music backwards there’s a Satanic message that you should off yourselves. The band went to court for that, and the trial was dismissed because it was outrageous. The outside world puts these titles on music. We just make it how we feel.”

“Conservative listeners are always going to judge us for being free artists,” adds theOGM. “We know that comes with the territory. But the Bible is way scarier than what we’re talking about!”

“They tried to punish him and he snapped. We just touched on something that already happened, but definitely aren’t telling people to do that. Motherfuckers try to glorify Christopher Columbus, but they don’t want us to talk about Christopher Dorner? Get the fuck out of here!” —theOGM

Earlier this year, Ho99o9 released a song called “Christopher Dorner,” based on the tragic true story of the LAPD officer who killed several colleagues and civilians. As Dorner explained in a manifesto on Facebook, he had experienced racist bullying since his time in the military, before being fired by the police for reporting a fellow officer who had used excessive force. Ho99o9 were compelled, like any other artist might be, to write a song about a serial killer, but make it clear they don’t support Dorner’s actions.

“What he had to go through being on the force as a person of color was really intense,” says theOGM. “They tried to punish him and he snapped. We just touched on something that already happened, but definitely aren’t telling people to do that. Motherfuckers try to glorify Christopher Columbus, but they don’t want us to talk about Christopher Dorner? Get the fuck out of here!”

Filmmaker Tyler Bradberry has tapped into a subcultural vein that includes projects with Troma’s Lloyd Kaufman, Eric Andre, DJ Douggpound, Power Trip, and Macauley Culkin. He first teamed up with Ho99o9 on their “Mega City Nine” video, before turning “Pigs Want Me Dead” into a commentary on George Floyd using clips from Grand Theft Auto V.

For BLURR, Bradberry edited together clips selected by Eaddy and theOGM such as the scenes from Straight Outta Compton that open “Flesh and Blood.” Bradberry believes that when people can’t agree on what reality is anymore, notions like horror become increasingly subjective, with anyone able to exploit it for their own gains.

“The Information Age is crazy,” he explains. “We’ve all been given instant access to the world’s information while trying to figure out how to triage matters of importance as they’re happening. It’s really easy to get overwhelmed, and a lot of people have not developed the tools to discern between good and bad information. Combine that with bad actors that want to use disinformation for their own gains, and it can paint a pretty scary picture.”

“It’s really easy to get overwhelmed, and a lot of people have not developed the tools to discern between good and bad information. Combine that with bad actors that want to use disinformation for their own gains, and it can paint a pretty scary picture.” —Tyler Bradberry

Ho99o9’s list of musical collaborators continues to grow in 2020, with features on BLURR from like-minded rapper Pink Siifu and Michael IX Williams, who fronts the sludge metal band Eyehategod. This follows their performance at a Black Lives Matter virtual event with Blink-182’s Travis Barker sitting in for their primary drummer Brandon Pertzborn (who’s also played with Marilyn Manson and Black Flag). They’ve been kicked off the Warped Tour, whose organizers’ fears might be shared by Barbara Walters, but fit right in at the Gathering of the Juggalos. “Mad respect to the clowns,” laughs theOGM. “Whoop whoop!” Yet nothing compares to their appearance at Berlin’s most infamous nightclub, Berghain, where Eaddy was inspired to strip down to his socks.

“If you go there on a Thursday, you might be in there for two or three days,” says theOGM. “That shit’s like a black hole. For the show we played there, our manager and drummer at the time were tripping, like, ‘Yo, you’re about to play the best club in the world. All the flyest people in the world come to party there.’ The sound system was amazing and it was super dark inside. It was a dope experience.”

“Me getting naked was the least freaky shit going on in there,” Eaddy chuckles. “That was like a bag of chips to the Berghain.”

Reflecting on why this year’s protests spread across the globe, Ho99o9 see people united by a common cause, just like their fans they call the Death Kult. In the same way the nines in their name are meant to flip the script on 666 and inject some positivity into culture, they see their music as a continuation of Louis Armstrong’s “What a Wonderful World.” Released in 1967 when populations were divided by racism, segregation, and war, Armstrong aimed to spread messages of the beauty that can still be found in the most difficult times.

“We don’t like to call ourselves activists, but we are,” says theOGM. “We’re actively pushing that agenda and always have been. You can go back to our record United States of Horror from 2017, and we were talking about the same things because it was the same climate then. There are a lot of eyes opening and changes happening now, but other people are showing their true colors. Whether you’re out protesting or just witnessing things, you’re still affected by everything that’s happening. Prison reform is part of the conversation and it’s beautiful to see everyone coming together. What a time to be alive.” FL 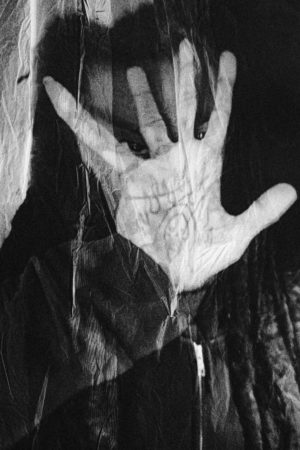