Fueled by a desire to make life better for himself and his family, Slatt Zy drips emotion on his charged new collection “East Lake Projects.”
Menu

Fueled by a desire to make life better for himself and his family, Slatt Zy drips emotion on his charged new collection “East Lake Projects.”

Slatt Zy is only eighteen, but he’s already lived a remarkable life. The Chattanooga, Tennessee rapper grew up in a two-bedroom residence with sixteen family members—he’s got eleven siblings, all from the same parents, who share their house with their grandmother and an auntie.

If it makes for cramped quarters, it’s also resulted in rich, robust music. With a melodic style that features Slatt Zy both rapping and delivering his vocals in a sing-songy presentation, the emerging artist made waves with his Zy State mixtape and Zy Story project, which set the stage for his just-released East Lake Projects. Buoyed by riveting reflections, unpredictable story angles, and a remarkably vulnerable approach, Slatt Zy stands in stark contrast to a strictly chest-thumping rap scene. He gets deeper.

“East Lake Projects is where I became a man,” he shares. “It was tough to value life there, and getting over that made me a man. To me it’s more than projects—it’s my family, and we got through together. Seventeen people in two rooms, twelve people sleeping on one floor. We been through everything—shoot outs, hungriness, shoeless, people dying. East Lake Projects is where all my problems came from and made me grown early, but my happy times came from there too. I couldn’t imagine any other way to be.”

In our Q&A, Slatt Zy discusses the pain he’s had to overcome, learning how to navigate relationships, and his affinity for the piano.

I was really impressed with the sonics and production of East Lake Projects, particularly the piano you have on a lot of the different songs. What makes you gravitate toward piano?

The type of writer I am, I like pain music. When I hear piano keys and all of that, it sounds beautiful, so I just go with it. I just try to be versatile and give my fans what they want. I try to give them different sounds. They don’t want to hear the same thing every time.

East Lake Projects sees you dealing with your emotions, feeling lonely, and coming from poverty. A lot of artists like to brag about how great they have it—what was it about you that wanted to explore frustration and things not being ideal yet?

I’m an up-and-coming artist. As far as the money, I’m just now getting into all that, so I’m not going to get on the camera and fake like I’m doing all this stuff I ain’t. I come from poverty. I come from the projects. I’m going to talk about what I’ve been through, what made me get to where I’m at right now. I’m not going to fake it.

Speaking of faking, on “Straight Out Them Projects” you talk about how fake love keeps calling your phone.

“I come from poverty. I come from the projects. I’m going to talk about what I’ve been through, what made me get to where I’m at right now. I’m not going to fake it.”

Man, you don’t even understand. These days, you’ve got people calling you that you haven’t talked to in thirty years—and I’m only eighteen. [Laughs.] They’ll be calling you like, “What are you doing?” Someone will tell you that they love you, and you’ve never heard that from that person.

As you’re navigating your life and your music career, how did you start to understand that this was going to be happening more and more often?

As you become a bigger artist, your circle gets smaller. I just knew I had to adjust to it. That’s why I really don’t like getting close to people. I don’t really care too much for that shit.

In a way, you addressed a similar thing on “Heart Right.” I thought it was interesting how you said you would give your heart to a stranger before you’d give it to them. What made you say that?

I said that because some people don’t deserve what you give them. You can do so much for a person and they’ll forget you did it. They’ll forget everything you did for them. You don’t do stuff for praise or for a pat on the back.

In that song you also talk about how you speak your mind to girls, but now they say you’re rude. What’s it like when you’re telling somebody how you really feel and they get upset?

“Last Dance” is another one that’s got the piano, but that one sounds a little more somber. What made you go a little bit deeper and darker?

When I say “dance with the devil,” with all the shit I’ve been through—like when I lost my brother, I was going through it. It was fucking with my head. I felt like every time I’m going to sleep, it’s like I’m dancing with the devil. I’m waking up covered in sweat. I’d be having all these thoughts about killing. At the time I was making that song, I was so fucked up in the head.

Do you feel like that music really helps you get through things? Is that the reason you write?

“I’ve had bad dreams. It’s like some movie type of shit. It’s crazy. Going to the studio, I’m not looking at it as recording. I’m not in my head at that point. I’m somewhere else.”

Yeah. At the time, I didn’t even know I was making music. It’s like I was just talking about what I’m going through. I’d wake up and instantly go to the studio. But remember, when I wake up I’m so fucked up in the head. So I’m going to the studio fucked up. I’ve had bad dreams. It’s like some movie type of shit. It’s crazy. So going to the studio, I’m not looking at it as recording. I’m not in my head at that point. I’m somewhere else.

How are you able to get out of that?

I don’t know. Lately, I’ve found my place. That was a dark place that I don’t ever want to be in again. I hadn’t ever lost a blood brother. I was fucked up for him.

On “Loved in a While,” I thought it was interesting how the girl was telling you she wasn’t interested in the material stuff. From a writing perspective, that’s kind of the opposite of what we hear a lot. What made you want to explore that angle?

At the time I was in a relationship. We were going through so much shit. She had been there for me before all of this, before some money started coming. So when I did get it, I’m trying to spoil her with this and that, hoping to buy love. But it doesn’t work like that. Gifts and money can’t buy love.

Did she make you realize that, or did you come to the realization on your own?

She kind of made me realize that. She loves me for who I am. Sometimes I’ll think that a person can love you more than what they do, so I’d be trying to buy her gifts to gain all of her love. But that ain’t the right way to do it. I figured that out. FL 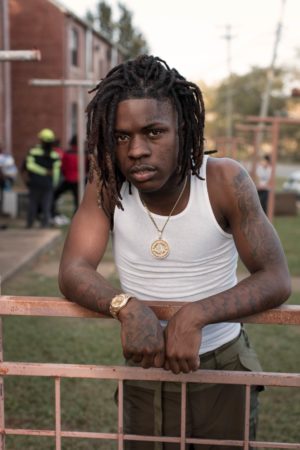