The debut record from Jenny Hval and Håvard Volden feels both familiar and new, sounding classical yet edgy.
Menu

The debut record from Jenny Hval and Håvard Volden feels both familiar and new, sounding classical yet edgy. 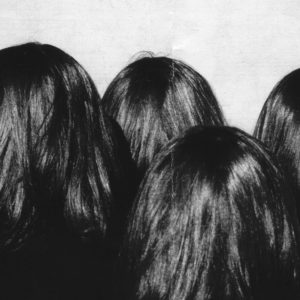 Menneskekollektivet, which means “human collective” in Norwegian, is the debut album from songwriter Jenny Hval and multi-instrumentalist Håvard Volden as Lost Girls following a decade of collaboration. Menneskekollektivet has the familiar avant pop elements of Hval’s previous endeavors, while at the same time exploring more experimental territories such as ambient, trance, and spoken word. The result is an album that feels both familiar and new, sounding classical yet edgy.

The opening, twelve-minute title track begins the record with ambient synths accompanied by spoken word lyrics. There’s a symphonic and orchestral quality to this number—as the song progresses, the beats build, and Hval’s vocals shift toward melodic singing. The tune transforms into an art-pop track populated by spacey sounds, discotheque vibes, and house elements. The track sounds like several songs in one, all of which feel seamlessly interconnected. The effect is poetic and chilled-out in some places, while in others, there are qualities of trance and dance-pop.

With electronic beats and poppy keys, “Losing Something” is darkly dreamy and hypnotic. Dissonant synths are juxtaposed with vocals that are gothic in some places and clear in others. With lush, glam, and bedroom pop qualities, the emotional spectrum explored in the song ranges from light to dark and gritty. “Carried by Invisible Bodies” begins with luxurious synths and a delicate ambiance, shifting with the introduction of high vocals and understated beats, giving it a dancehall feel. The singing is amplified by the synths and ambient sounds, evolving into spoken-word quality like in the beginning of the record. The effect is inviting, creating intimacy between Hval, Volden, and the listener.

Menneskekollektivet takes listeners on a journey that is both transcendent and meditative. The experimental qualities allow the album to be many records at once—electronic and poppy in some places, ambient and symphonic in other places, and in places, all of these things simultaneously. Menneskekollektivet is an ambitious and diverse record that explores a wide range of musical styles, resulting in an emotionally driven musical journey.