In Conversation: Story Time with J.PERIOD

With the innovative “Story to Tell (Chapter One),” famed producer/DJ J.PERIOD delivers one of the most ambitious rap projects of the year.
Menu

With the innovative “Story to Tell (Chapter One),” famed producer/DJ J.PERIOD delivers one of the most ambitious rap projects of the year.

If it sounds unconventional, that’s because it is. For his debut album, producer/DJ/music supervisor J.PERIOD has created a musical storybook. Set to be released in chapters, each entry stands as its own musical event while fitting together as part of a larger story. The first, Story to Tell (Chapter One), is due April 30 and includes the lead single “All in Your Head” featuring Dave Chappelle, Black Thought, and Tiffany Gouché. The three are part of an all-star cast that also includes such disparate artists as Lin-Manuel Miranda and Joell Ortiz.

Renowned for his mixtape work with Nas, Lauryn Hill, C.L. Smooth, and others, J.PERIOD produced Story to Tell (Chapter One) while juggling his work as Music Supervisor for the NBA’s Brooklyn Nets, holding a founding seat on The Kennedy Center’s Hip Hop Culture Council, and working on other musical projects, of course.

In our Q&A, J.PERIOD discusses how he came up with the book-like Story to Tell (Chapter One) album concept, how Jazzy Jeff inspired his creative process, and how his new project is similar to his acclaimed Nas, Big Daddy Kane, and Q-Tip mixtapes.

Where did the idea for the chapters being like a book, with Dave Chappelle telling people to turn a page, come from?

It comes from being a kid and having these book and record sets, which were some of my favorite things. It was literally like, “When you hear the sound, turn the page.” I have that voice in my head from when I was a kid—that’s imprinted on me from back then. It’s that, combined with the five-year arc of making this and trying to figure out what is the best way to feed this to people. I even felt [the same way] in terms of the mixtapes. When I started with the Nas mixtape, putting interviews in a mixtape was unheard of. So I had to kind of sneak it in there in smaller doses until, over time, people started to understand the magic of that extra kind of perspective on the story we already know from the song. I think that allowed me to expand it. All kinds of things have changed, and I’m always looking for the way to thread the needle and get this stuff to the people.

What was the five-year process? How did it end up taking that long?

When I sit down to make beats in a room by myself, I end up making my best version of Mobb Deep beats. That’s my native language. Something I heard in all the interviews I did for all my mixtapes was that there was a magic to the collaborative process. You hear Q-Tip talking about how everybody was in the room and just having fun, and that’s what led to some of those magical moments. Thanks to Jazzy Jeff, I was invited into this community of the PLAYLIST Retreat, where there’s so many incredibly talented artists and DJs and producers and musicians. I started, through that process, collaborating with other artists and seeing the magic that all these other folks are talking about.

“Something I heard in all the interviews I did for all my mixtapes was that there was a magic to the collaborative process. You hear Q-Tip talking about how everybody was in the room and just having fun, and that’s what led to some of those magical moments.”

I had spoken about the energy shifts that take place when you’re bouncing ideas off of other folks. So I think things started to shift from that. Also, it’s that thing where you play your beats and then somebody else plays their beats and you’re like, “Damn, I’ve got to keep working.” I heard stuff that blew my mind and it made me say, “Well, OK. What would happen if, instead of me doing this, Stro Elliot, you come over here and you play the drums.” That was a thing where I would go to the studio with Stro, who I met through Jazzy Jeff and the PLAYLIST Retreat, and we really hit it off. Then Stro and I would go see Rance from 1500 or Nothin’.

We would collaborate, or 14KT would come through and we would collaborate with the four of us. I just started to see the levels getting unlocked every time I would do that. What you realize from that process is that the magic of what’s created is really in the group and the collaboration of all those parties. Then I started to conceive of, “OK, how do we put this into the form that I’ve dreamed of from the jump and make it a storybook?” I don’t think that would have happened if I would’ve finished in one year or two years. I think it took this whole arc to make the records as strong as they are and to make it connect in the way that it does. 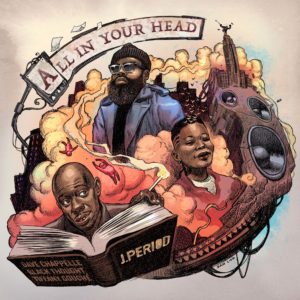 The three songs that really anchor Chapter One—“All in Your Head,” “Globetrottin,” and “Grand Combo”—are very thematically different. With “All in Your Head,” the themes of losing time and setting yourself free are especially appropriate during the pandemic. On the thematic side, what part of that was you, and what part was Black Thought and Tiffany Gouché?

That record originated via Jeff and the retreat. What happens is there’s this part at the end of the retreat where you break off into groups. He’ll pair very different artists together and your job is to go and make a song in 24 hours. The original, raw elements of that track were in that challenge. While I was working on the beat, I was sort of the producer on my squad of artists. Kaidi Tatham, who plays bass on it, walked by and was like, “Ooh. I can hear a groove in my head on that. Can I get on it?” I was like, “Bet.” So Kaidi places his bass, and then Tiffany walks by. She was like, “Ooh. I’ve got an idea for that. Can I get on it?” She just felt the spirit of what was there and those words came to her in that moment. That’s just what Tiffany does, which is amazing about her.

Those challenge tracks, I won’t say they die at the retreat, but they stay at the retreat. That song just kept haunting me in my head and I think that any artist that’s trying to create something knows that struggle of the doubt holding you back, and it’s all in your head. I think you’ve got to get to that point where you liberate yourself. In order to imagine and dream big, you kind of have to cross that threshold.

“I think that any artist that’s trying to create something knows that struggle of the doubt holding you back, and it’s all in your head. I think you’ve got to get to that point where you liberate yourself. In order to imagine and dream big, you kind of have to cross that threshold.”

So that was just speaking to me every time I would listen to that record, and it became this kind of anthem in my process of making the album. In order to do these crazy things I’m trying to do, many of which are just inconceivable—like getting Dave to narrate, or getting Lin to participate, or some of the things that are coming later that I won’t say yet—those things were kind of hard to imagine. With Tiffany, that song became my anthem. So, I decided that it needed to go first because every artist knows that struggle. If we’re going to take a journey, let’s set the journey up properly by saying, “OK, before we can fly, we have to get past the doubt.” It just so happens that that’s a feeling everyone is familiar with right now because of what’s going on in the world. Part of that is just the magic of how it lined up. But once that was there, then I went to Dave and explained the concept and got him on board.

Story to Tell (Chapter One) is powerful but brief. Why did you decide to keep it short?

It’s a combination of things. One of them is just this idea of the story unfolding, and what you hear at the end of Chapter One is sort of this little tease of what’s going to come in Chapter Two. If you’re trying to get people to key in and get invested in a story, you gotta pull them into it, especially in a moment in time where people are used to more bite-sized, short-form things. I’m coming from mixtapes, a longform storyteller. So it was kind of a combination of finding a creative way to approach the way that listeners take things in now and trying to bring them along where you hear enough that you’re like, “I gotta know what happens next.” Hopefully you’ll find out by the time we get to the end of this that everything plugs together in the same way that my Big Daddy Kane or Q-Tip [mixtapes I’ve done] do. It’s just that you’re getting it in episodes. FL