The radio host, voice actor, writer, and director’s new book “It Never Ends” is out now.

If you’re a fan of Tom Scharpling, his voice is probably as familiar as that of a close family member. Every Tuesday for the past 21 years, the beloved radio host of The Best Show has offered listeners three hours of “mirth, music, and mayhem.” Each week, Scharpling plays the straight man to various absurd characters portrayed by his comedy partner, Jon Wurster (drummer for The Mountain Goats, Superchunk, and Bob Mould). Yet this is just one facet of the freewheeling broadcasts that include listener calls, “FP” (famous person) interviews, and Scharpling’s scintillating monologues on the chumps of the world that deserve to be steamrolled.

Throughout a unique career trajectory, New Jersey’s other, other favorite son has worked as a staff writer on Monk, directed music videos for Aimee Mann and The New Pornographers, and most recently provided his voice to the cartoons Steven Universe and Adventure Time. FOTs (Fans of Tom) who enjoy the sound of his dulcet tone have enough audio material to last a lifetime, whether they got on board during The Best Show’s origins at freeform radio station WFMU, or over the past decade since Scharpling and his zoo crew went independent. 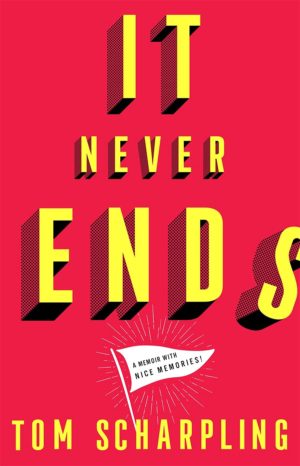 Over the years, Scharpling has dealt up numerous emotional moments on air, while keeping most cards from his personal life close to his chest. That changes with It Never Ends, a captivating memoir that’s equal parts hilarious, heartbreaking, and hopeful. Opening up about his mental health struggles and the traumatic effects of electroconvulsive therapy, Scharpling lays himself bare on the page with a newfound vulnerability. In a conversation over Zoom from his home in LA, he explains how it was always his goal to tell an underdog story with the emotional heft of Rocky, Seabiscuit, or Rudy.

“Writing this book was very difficult, honestly, because I’ve never talked about any of this stuff,” Scharpling says. “Now it’s all out there, which is liberating and scary at the same time. It’s been a lot for me to wrap my head around because I kept these parts of my life secret for so long. A couple of friends have said it feels like I’ve shown them the missing pieces of the puzzle and they understand me a lot better now. I wanted to be honest about the things that have happened, but also keep it from becoming a pity party.”

“It’s been a lot for me to wrap my head around because I kept these parts of my life secret for so long. A couple of friends have said it feels like I’ve shown them the missing pieces of the puzzle and they understand me a lot better now.”

Of course, that could never be the case. Beyond its dramatic revelations, each chapter is packed with side-splitting anecdotes and expanded versions of Scharpling’s greatest hits. Even if you’ve heard about his cringe-inducing elevator ride with Patti Smith, or the car crash that nearly killed him on election day 2016, you’ve haven’t read them in this much vivid detail. Scharpling deploys self-deprecating one-liners like Rodney Dangerfield if he had an encyclopedic knowledge of pop culture (“So much of my life I’ve felt like I’m in a movie, but it’s usually a cross between My Dinner with Andre and Gummo”) or the NBA (“I found myself wearing a pair of running shorts that John Stockton would reject for being too snug”).

As a lifelong music obsessive, Scharpling explains how his childhood interests spanned everything from Husker Dü to Frankie Goes to Hollywood to Emerson, Lake & Palmer. This led him to read countless rock biographies, which provided a template for the cliches he strove to avoid in his book. “The biggie for me was always the way people start the story way too early,” Scharpling laughs. “No one cares about your grandparents, so you can spare us the origin story of your family’s travels before you became you. My book wasn’t meant to be linear in regard to time, but more emotionally linear, if that makes sense.”

In one of It Never Ends’ most memorable passages (alongside Scharpling’s run-ins with Spike Lee, Micky Dolenz, and The Rock), he describes pitching a movie to Adam Sandler’s production company, Happy Madison. Though it ultimately failed to result in the greenlighting of a project helmed by Horatio Sanz, Scharpling describes the Sandman as one of his white whales: “Since I’m the guy who wrote a script for a third Grown Ups movie without anyone asking, you can probably guess I love Adam Sandler. I do. The prospect of writing a movie for his company was a dream.”

So why does he feel the need to defend his appreciation of one of the world’s most successful comedians, who can jump from a critically acclaimed project like Uncut Gems to the lowbrow laughs of Hubie Halloween? “Because some of Sandler’s stuff is collosally dumb!” Scharpling exclaims. “People who aren’t into it can dismiss his movies with a withering wave of their hand. The thing is that we all know they’re stupid. The people who make them know they’re stupid. I can’t believe somebody would need to have that explained to them. Some of his movies are bad bad, and a lot of stuff hasn’t aged well obviously, but they’re still funny.”

“The biggie for me was always the way people start the story way too early. No one cares about your grandparents, so you can spare us the origin story of your family’s travels before you became you. My book wasn’t meant to be linear in regard to time, but more emotionally linear.”

Basing career choices on whatever makes him laugh has been Scharpling’s M.O. since his first scripted call with Wurster. In 1997, Rock, Rot & Rule put the duo on the map with its heady musical details and ridiculous claims like “Madness invented ska,” successfully trolling some of WFMU’s humor-deprived listeners.

This approach has continued over the past two decades with a series of scripts written by Scharpling that have yet to see the light of day. They include Rock School (“a John Oates–type performer becoming the dean of a performing arts school to secretly further his comeback”), Punched in the Nuts (“the story of a nu metal singer navigating the world 20 years later”), and Flyin V (“still maybe the funniest thing I’ve done”).

Drawing on the cringe humor of Albert Brooks years before The Office, Scharpling says, “We were working some turf that was not well-trod at that point. If Flyin V came out when it was written, it would have been a different ball game.” He still hopes the scripts can be filmed someday, but after years of navigating fickle studios, Scharpling’s book includes sage advice: “Try to have fun with the work if you’re lucky enough to get it because the ride usually ends before you want it to.”

“Basically it’s non-stop frustration, and then one day it stops being frustrating,” he sighs. “Unfortunately you don’t get to decide when that happens. I could look back when I’m dead and buried in the next life and Flyin V never got made. Or that could change tomorrow when someone reads it. You just have to stay in a state of conscious belief.”

Midway through It Never Ends, Scharpling lists Howard Stern as a formative inspiration. That changed in 1997 when he lined up for an opening day screening of Private Parts, the shock jock’s overhyped autobiographical film. “He was the talented guy who hadn’t gotten a fair shake from the entertainment biz,” Scharpling writes. “But once his movie came out, he was now the Man. And I just can’t root for the Man.” Twenty-four years later, with his book landing on shelves and earning widespread praise, does Scharpling need to avoid the same fate?

“I don’t think there are going to be people lined up for eight hours to get signed copies of this book,” he laughs. “I’m still in a very different place in the pecking order than Howard Stern, firmly in the middle of the pack, at best. It’s honestly just exciting for me that there’s something this new at this point in my life, but it hasn’t allowed me to write my own ticket. Life is always going to be an underdog situation for me, and I embrace it!” FL