In Conversation: Half Waif on Closing One Chapter and Beginning Another with “Mythopoetics”

Calling it the project she’s always been hoping to make, Nandi Rose opens up about her fifth album.
Menu

Calling it the project she’s always been hoping to make, Nandi Rose opens up about her fifth album.

Over the past decade, Nandi Rose has created music under the name Half Waif, with each project she’s released carrying its own distinct flavor. Early albums Kotekan and Probable Depths are enticing blends of full electronic influences and acoustic joy, and last year’s The Caretaker was a quieter, meditative journey through isolation. While pop elements have always been part of Rose’s musical DNA, they’ve come to the forefront more than ever on her new album Mythopoetics. While reflecting on some of the more painful memories in her life, Rose uses the bright hum and catchy choruses of pop music to move into a more hopeful future, aided by longtime collaborator and producer Zubin Hensler. It’s also perhaps the purest look into Rose as a human and musician yet, as she views it as the culmination of her journey so far, the album she’s been aiming to make for years.

As Mythopoetics approaches release, we spoke to Rose from her home in Upstate New York about what makes the album so special to her, delving deeper into the realm of pop music, and reflecting on who she was when writing the record.

In the lead up to Mythopoetics, you’ve talked about how it’s the album you’ve wanted to make your whole career. What about it have you been aiming for over the years?

I feel like over the last 10 years, I’ve been wanting to find a sonic balance between pop music and emotional storytelling and songwriting. Where do those two intersect and play off of each other in a way that feels cohesive? I think I’ve been pushing over these last records both the emotional balladry and piano songs and then also the pop direction. And on this record I felt like sonically, both of those elements came to fruition in a way that felt satisfying to me. This is the most pop I think I’ve ever gone with some of the choruses of some of the songs, and I’m so glad that I did that—it  scratched an itch.

It just felt like this satisfaction that I honestly haven’t felt before. And the way that I really knew that was the case was every other album I’ve written, when I finish it, I immediately start writing the next one. That’s because I finish an album and I’m like, “Cool, I did that, let me do it better. How can I dig deeper and continue to evolve in this direction?” I’m not working on another record, and that feels really good. It says to me that this chapter feels like it’s closed. What a good feeling that is to not be immediately rushing on to the next thing, to just be able to sit with this music. I don’t know what the next thing is gonna sound like, but I feel like this was the culmination of something.

The Caretaker was born of pre-pandemic isolation, while Mythopoetics was finished while we were all forced to be isolated—how did those different flavors of isolation affect this record?

“That’s what I really hope the listener takes away from the journey of listening to this music—a sense of moving through. This record as a whole is really dealing with how we can turn our pain into something not that we deny or ignore, but that we carry with us and say, ‘Oh, it’s just a little scar, you want to know how I got this thing?’”

Because The Caretaker’s isolation was self-imposed, it was like, “I’m going to take this hiatus from the world and from this space, see what I can create out of silence.” Interestingly, I’ve actually hardly written any music in this period of isolation that was forced upon us because it’s a really different feeling. Also, when everyone’s experiencing this same kind of state as an artist, you want to feel like you’re experiencing something new and that you’re stepping outside of the world to write. And so when everyone is in the same place, it felt less inspiring to me.

I think there will be a number of people who will be like, “Oh, Mythopoetics is a pandemic record.” And the fact is, yes, I finished it in the pandemic—but aside from “Horse Racing,” none of the songs were written with any knowledge that this was happening. It was actually born of a time of intense collaboration, I was really grateful to be in the studio with my co-producer, Zubin. It was really sad when the pandemic hit and we were like, “Oh my God, we can’t finish this in the room together.” But those sessions that we had writing and arranging together were really magical. 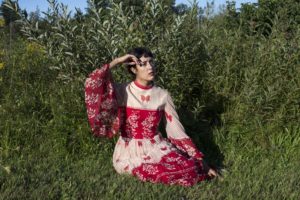 A lot of the tracks on the album address really tough experiences from your life, but the album is also incredibly optimistic in its tone. What was your approach putting that optimism into the album?

I’m really glad that you get a sense of optimism from the music. That’s always my fear, that people will feel depressed by some of these songs. But it’s not the intention at all, I gained so much power and strength and hope through songwriting. It’s catharsis and it’s transformation and ultimately feeling so much weight is lifted through the songwriting, and that’s what I really hope the listener takes away from the journey of listening to this music—a sense of moving through. This record as a whole is really dealing with the idea of transformation of how we can turn our pain into something not that we deny or ignore, but that we carry with us and say, “Oh, it’s just a little scar, you want to know how I got this thing?”

It’s not that you don’t feel the pain, you’ve removed yourself from the source of that pain enough to be able to share those stories. That’s what storytelling and songwriting are, they’re vehicles for gaining distance and separation from the immediacy of our pain. And I was really interested in that idea. “Mythopoetic” means the art of mythmaking, the art of storytelling. And that idea of using the power of stories as a source of transformation has always been something that’s interested me and really came to the forefront in writing this record.

This record is way poppier than you’ve gone before. Was there any nervousness about going that far into pop?

“Because so much has changed in the world I feel like I want to hold on to who I was before. I don’t want to let go of who that was, even though that was a hard time in my life.”

I think I’m only nervous in that I worry I didn’t do it as well as I could have [laughs]. Like, “Who is she trying to be? She’s not a pop star.” But of course I would never want to discourage myself or anyone else from trying something that they don’t feel is immediately in their wheelhouse. We should be exploring different sides of ourselves, and, like, if you love pop music, make a pop song. I just love pop music. I love the satisfaction of a really tight chorus. I was thinking about live performance and wanting to have fun on a stage and wanting an audience to have fun. You might go to a show because you want to have fun, but you also want to experience something deep. And I think there was an element in the back of my head of wanting to create that experience, both for myself as a performer and for the audience where, like, we’re gonna go into this number, and we’re just gonna dance, and I’m gonna scream, and then we’ll have songs that are gonna go deeper and more introspective.

Not that every recording process isn’t enjoyable in its own way, but this sounds like the most fun you’ve ever had with an album.

Oh my god, it was so much fun. And I really do credit a lot of that to working with Zubin. When we were in New York recording he was like, “OK, so we both have a lot of musician friends in the city, we could bring in so-and-so to do drums.” And at a certain point I was like, “I don’t think we should bring anyone else in. I think this is our record, and it’s important to me that we play every instrument.” Collaboration is extremely difficult and extremely rewarding. It’s one of those things that it’s really hard to find someone you can trust deeply and listen to, who brings ideas to the table.

What has it been like for you revisiting Mythopoetics during this press cycle, since it’s the first time you’re doing it while not working on the next album?

I think I’m interviewing a lot better for this record, to be perfectly honest [laughs]. I feel much more inside of this record. I haven’t left it yet, I haven’t left that world. Which, again, is really unique. I’ve never been in that position before. It feels really good. I feel very tender toward this music. I feel really proud of this record, and really good about sharing it. It’s been crazy, I’ve been in this album cycle for six months already because we’ve released six singles, which is also insane. But we wanted to try something new because this year was unprecedented. So why follow the same formula? There’s still space in my life for this music. There are a couple of songs on the record that every time I hear—“Sourdough” and “Powder,” I think, would be the two—I feel very emotional. Because as much as writing these songs enabled me to move on from that pain and that moment in fall 2019 when I was writing most of the songs, in a lot of ways I still feel connected to that person who wrote those songs.

Of course, a lot has changed in that time, but almost because so much has changed in the world I feel like I want to hold on to who I was before. I don’t want to let go of who that was, even though that was a hard time in my life. But it’s like when you look at a photo of yourself when you’re a kid and you’re like, “Man, you don’t know what’s coming.” And there’s a lot of emotion to that. I love seeing my happy little smiling face as a kid. But there’s also, like, “You don’t know what’s coming, I feel so tender toward you.” And I think I feel that way to the woman I was when I wrote this record. It was right before so much changed, and in a lot of ways I want to maintain a connection to her, even though the world has separated us so much from who we were. So it feels good to bring her in, to bring that time of my life into the present and share that. FL