With a new LP and a new outlook, the genre-bending rapper/singer-songwriter removes himself from the limelight to share what he’s learned.
Menu

With a new LP and a new outlook, the genre-bending rapper/singer-songwriter removes himself from the limelight to share what he’s learned.

Belly took stock of his life and his business. Even though the Palestinian-Canadian rapper/singer-songwriter was enjoying a robust solo career and tremendous success as a songwriter for other artists (notably co-writing The Weeknd’s Grammy-winning single “Earned It”), he felt unfulfilled. So, after releasing his Immigrant LP in 2018, Belly removed himself from the limelight.

With the extra down time came peace and perspective. Now, as Belly prepares for the release of his next LP, he has a new outlook on life due in part to a recent engagement. It’s been a period of tremendous personal growth for Belly, who says his new material will reflect his evolution.

With his latest single arriving today—the Weeknd and Young Thug–featuring “Better Believe”—we talked to Belly about the symbolic importance of the dance in his recent “Zero Love” video, how some of his early lyrics still resonate, and why he taps into different parts of his creativity.

I was interested in how you wanted the dance in the “Zero Love” video to feel like a traditional Middle Eastern dance. What’s the name of the dance, and why was that important to you?

That’s the Dabke right there. If you ever go to a Middle Eastern wedding, you’re going to see people doing the Dabke. That’s a big part of our tradition, and it’s something I always wanted to incorporate and I felt like this was the perfect chance to do it.

What made the desert the right location to match the dance?

The dance could have happened anywhere, but I thought the desert was just so picturesque and so beautiful. I wanted to have that beautiful backdrop to really highlight that moment. I think that’s the part that stood out the most in the video.

Recently you’ve been talking a lot about not taking moments for granted. What happened in your life to make you, as somebody who’s accomplished a lot, to be like, “Man, I really need to stop and appreciate this stuff instead of just treating it as normal”?

“I feel like we’re stuck in the past most of the time as human beings—we’re thinking about shit that we went through. It’s rare that you find people that really live in the present. That’s really what I’m trying to work on. I’m trying to to enjoy the now more than anything.”

I feel like sometimes you get in this business and, God bless, you’re able to accomplish a lot of things. A lot of things are happening really fast and you don’t get the chance to stop and just be like, “Damn, I did that right there, let me stop and say thank you to myself, let me stop and big myself up for a second and actually enjoy the moment and be present.” I feel like we’re stuck in the past most of the time as human beings—we’re thinking about shit that we went through. Or we’re stuck in the future and we’re being ambitious just to get to something that we want to get to. It’s rare that you find people that really live in the present. And that’s really what I’m trying to work on. I’m trying to enjoy the now more than anything.

What were some key things that made you realize that, and know that you needed to work on it?

I recently took a couple of years off just to get my mind right, get myself in the right space. Once you do that and you slow down, you actually look back. You’re like, “Man, I really breezed through these things with tunnel vision, but I wish that I could really have true memories from some of these moments that I probably wasn’t present for.” I was there, but I wasn’t present. Now, I really take things in. If something amazing is happening, or if I see something that I find beautiful, I try to stop and really take it in and just be like, “That’s what life is about.” I never understood what they meant when they said, “You got to stop and smell the roses.” But now I get it. I really literally stop and smell the roses now.

How would you say that’s affected you as far as your songwriting?

It’s amazing, with songwriting it makes me more true to what’s happening to me right now. I’m really great about writing about my past, or things that have recently happened to me. I feel like now I could really write in the headspace that I’m in [in the present]. I don’t have to method act, or bring myself back to those moments. I could really just be here and create stuff and be happy about what I’m making. I wanted to find the love in it again. I wanted to be passionate about it, so I stepped away for a while and those are the things that made me kind of come back in a different way.

What was going on in your life and in your career that made you take that step back after you released Immigrant in 2018?

It was a lot, just mentally. I had been in the industry for so many years. I had some personal things happen, a few incidents kind of behind the scenes, and I felt it was time for me to just step back and have an outside-looking-in perspective. I had been in the eye of the storm for so long that I didn’t know what it looked like from the outside. So I had to just step back and assess everything: assess myself, assess where I’m at in terms of my career, where I’m at in terms of my spirituality, my mental health, everything. I really sat down and assessed myself from A to Z until I was like, “Alright, yeah, I’m confident that this is the path that I want to go down. These are the things I want to do.” I’ll always be goal-driven, but I like to enjoy what I’m doing and what I’m working on in the moment, now more than ever.

“I really sat down and assessed myself from A to Z until I was like, ‘Alright, yeah, I’m confident that this is the path that I want to go down. These are the things I want to do.’”

One of your earlier songs that I think is particularly powerful is 2007’s “History of Violence,” which, unfortunately, is still relevant today because of the ongoing conflict involving Palestine. What type of perspective do you take knowing that what you’re rapping about is still going on?

It’s a tough subject for me. I feel like that’s why I use music to express it, especially in those days. That was my most clear way of being able to express the message. It’s sad, but in a lot of ways the song is still relevant because it’s still creating awareness around things that people might’ve missed in terms of things that are happening politically, just certain tactics that get used when it comes to people that are in tragic situations like that. I’m glad the song is still opening eyes to certain things that people might not have seen.

As a writer your subject matter changes quite a bit. You’ve had success writing R&B songs, political songs, celebratory songs, songs where you’re flossing—how and where do you find it best serves you to tap into these different parts of your skillset?

I just stay true to the fact that I’m a human. I’ve got different moods and I got different vibes. I know that the music is going to translate and give somebody a different soundtrack for any situation they’re in. That’s what I’m really going after, because that’s really the soundtrack of my life. I love to party some nights. Some nights I love to be in the house. I just got engaged. I’m a lover boy, straight up. All those parts—they play a role in who I am as a person and that translates into who I am as an artist. I like to let every one of those aspects of me get a little bit of shine when it comes to the studio. FL 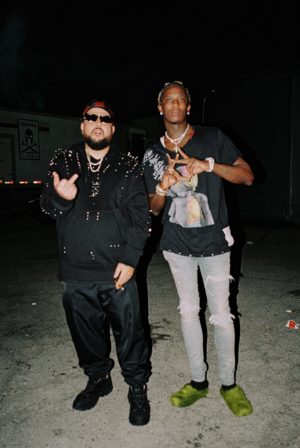