We spoke with Grace about her mindset going into this unusual gig, the future of Against Me!, and Cameo’s unrealized potential for human connection.
Menu

We spoke with Grace about her mindset going into this unusual gig, the future of Against Me!, and Cameo’s unrealized potential for human connection.

Laura Jane Grace has played at a lot of non-traditional venues over the course of her illustrious career, but she’s never performed at a landscaping company—until now. On August 21, Grace and The Lawrence Arms’ Brendan Kelly will make an appearance at Philadelphia’s Four Seasons Total Landscaping, the infamous site of Rudy Giuliani’s televised breakdown following the election results that will be remembered as the setting for one of the most bizarre chapters in our country’s political history.

We spoke to Grace about how the show came together and her mindset going into this unusual gig. We also discussed the future of Against Me!, the lasting effects of the pandemic on touring culture, and how a simple Cameo message can foster human connection.

How exactly did this show at Four Seasons Landscaping come about?

I can’t really take any credit because I got asked to be a part of it by Toby [Jeg, Red Scare Industries] and Brendan Kelly. I know Brendan is already touring at the time and, you know, I feel like I’ve kind of asked both of them whose idea it was and where it came from and I can’t get a clear answer. But I got asked and I’m very happy to be a part of it.

Have you ever played at a landscaping company before?

I’ve never played at a landscaping company. It’s a first for me, and I really want to meet the people that run Four Seasons, but I’m not going in with any pre-judgements or anything like that. It’s not really reclaiming a space, but for me personally it does feel like an act of healing because in this weird way we all experienced this psychotic hellscape of reality that was followed by this mass denial on a pretty unprecedented scale. Just seeing Rudy Giuliani stand in front of a landscaping shop in the middle of nowhere Philadelphia next to a porn shop…regardless of whether or not you agree politically, I’ve always felt like we had some standard of reality.

Did you watch the press conference while it was happening?

Yeah, of course. Unfortunately that part of the pandemic was, for me, a low point. I’d broken my foot so I was glued to the TV and riveted.

The initial confusion between the Four Seasons Hotel and Four Seasons Landscaping is still difficult for me to  process.

Right, and what I do know about Four Seasons Landscaping is that it’s a woman-owned landscaping company, which is awesome. But then the idea of, “How the fuck did Giuliani stumble into that?” Did he just call them up? I could see it all playing out like a movie, and it’s dramatic, right? 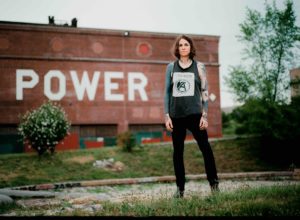 Have you thought about your setlist at all? Are you treating this show any differently than a club show?

I’m treating it like busking on a street corner, and regardless of the context I’m so looking forward to playing a show. I haven’t played a show in a year and a half other than live stream stuff, and I want a therapeutic moment of release where everyone is singing along and it’s going to be joyous and nothing depressing. I want a joyous release.

Have you been working on new music over the pandemic for Against Me! or any of your other musical projects?

Against Me! has kind of been on hold. I don’t know, we’re trying to figure it out. If anything, I’ve learned the value of momentum in this crazy big way. Like, we were going for 20-plus years and had it rolling and rolling and rolling. To have it all stop, it’s hard to get going again. But I’ve still been working on music myself; I jumped into two recording projects in St. Louis this month, knocked those out and am just continuing rolling on.

“How do you position yourself to come out of a pandemic to where you can work if you’re a working musician? To me, the idea is to keep going and put out a record this way so that when you come out of it, you can tour and there’ll be something to go out and play.”

Have you had a chance to play anything from Stay Alive live yet?

No, not at all. Some people were talking online the other day about the bottleneck that’s happening because so many bands are trying to go out there and tour—a lot of smaller bands are getting the shaft and not being able to get on bills. I saw something like that coming and wanted to stay ahead of that. How do you position yourself to come out of a pandemic to where you can work if you’re a working musician? To me, the idea is to keep going and put out a record this way so that when you come out of it, you can tour and there’ll be something to go out and play.

Speaking of adapting, I saw you were on Cameo and I fell into this rabbit hole of who was on the site—everyone from reality television stars to H.R. from Bad Brains. There was nothing like this for us growing up, so I wonder how that experience has been for you.

It’s been really genuine, and it blew my mind because I would not have done it had the pandemic not happened. But I’m a working-class musician and need to be working during a global pandemic. I think people get the wrong idea of it—they think that it’s something where you say, “Hey, will you say happy birthday to my friend?” Then an artist phones in this really cheesy birthday message and takes your money. There are people who approach it that way, but you can tell it’s bad for them. The best advice I was ever given about press: Don’t answer the question you were asked, answer the question you wish you got asked. You have the opportunity to create a moment with somebody and that can transfer into real-life moments, too.

For example, a couple of months back someone ordered a Cameo from me and asked me to give a pep talk to a friend’s band who were having a tough time through the pandemic, so I did. I was giving the best advice I could. Flash forward to two weeks ago, that band drove out to St. Louis, we spent the day here in the studio, we spent the day recording songs and walking around making art. It was rad. On a more somber experience, I connected with a friend early on in the pandemic who I hadn’t talked to in years. They ordered a Cameo from me and I recorded a message for him and he passed away a few months after that. It’s these crazy ends of the spectrum of really genuine possibilities that come from it—and that’s what I see as a lasting residual effect of the pandemic that everyone should take note of.

I think a lot of these technologies that have arisen from the pandemic are going to continue on in the future in some form.

Yeah, even with the Four Seasons event, I was talking with Brendan and Toby earlier about how do you livestream that? If you watched Giuliani speak there on the news, why can’t everybody be a part of it, and does that take anything from the moment of being there? As an audience member, I’d rather be there in person, but I don’t know. That’s what I see as a result of the pandemic: How do you continue to spread your message? How do you continue to work as an artist? And how do you push things forward and do them in a new and exciting way that actually has energy and vitality to it? As opposed to coming out of the pandemic and going like, “Alright everybody, let’s go back to doing it the old way.” What the fuck is that? [Laughs.] FL