In Conversation: Foxing Embrace Pop While Pondering the Universe

Conor Murphy talks inspiration and collaboration ahead of the release of “Draw Down the Moon.”
Menu

Conor Murphy talks inspiration and collaboration ahead of the release of “Draw Down the Moon.”

With their ambitious arrangements, huge hooks, and heartfelt storytelling, Foxing have spent the past decade working their way to the top of the emo scene. The Saint Louis band’s latest album, Draw Down the Moon, is a sprawling, genre-eschewing record that embraces the sounds of pop music while subverting its stereotypes with electronic production that harkens back to the golden age of indie rock. Drawing from themes as intriguing as paganism and the universe at large, the record doesn’t just see the band challenge their technical boundaries, it finds them pushing Foxing’s entire identity.

Draw Down the Moon coincides with the 10-year anniversary of the band’s formation, and you can hear their seasoned chemistry in its impressive singles: “Go Down Together” melds stadium-sized hooks and oblique electronics, while “If I Believed in Love” dabbles with synthy R&B; the title track, meanwhile, simultaneously explores dance rhythms and big-room rock music. DDTM is the type of album that would have blared from the speakers of a Williamsburg Urban Outfitters if it had only come out 10 years sooner.

As he prepared for a romantic birthday dinner with his partner, we Zoomed with Foxing’s Conor Murphy to talk about collaborating with Manchester Orchestra, drawing inspiration from the occult, and the band’s goals now that Draw Down the Moon is out in the world.

Coming from a band known for baroque sounds and arrangements, Draw Down the Moon still feels remarkably big. I’m curious about your vision going into making the record.

We had just finished with Nearer My God, and that album was just a ton of “Let’s make the type of music that we’re really interested in making.” But we didn’t nail it down to one specific idea for anything, it was just kind of making stuff and being excited about it. And with this one, we were doing the same thing where we wanted to make something that we would enjoy listening to, but also we wanted to do it all with intentionality. This was the first album that had a concept before we started making it.

That idea was, there’s this cartoon special called Joe Pera Talks You to Sleep, and he has this soothing voice and he tells these boring stories. In part of it, he talks about Stephen Hawking cheating on his wife and how you have to think about it from his perspective. He looks out at the universe all day and ponders how vast it is and how insignificant he is, and so what does it matter if a man cheats on his wife? Following that same line of thought [Pera] says, “If the universe is so vast, and you are so small—if you find one other person that loves you, that you love and with whom you share this trust—why would you ever want to hurt that person?” That was the core concept: cosmic significance.

“​​As we’re aging and really doing a lot more looking up into the sky and going, ‘What the fuck am I doing with my life?’ that idea is really vague and seems too big to take on. But because of it, there’s so much at the forefront of our minds.”

How did something so vague and conceptual relate to your everyday life? Are there any specific moments that you feel pull from universality more than others?

The first song on the album, “737,” is all about age. I feel really connected to it because we’re 10 years into doing this band. We’re at a point in our careers where you look around and you go, “What have I done, where are we going, and is this still worth doing?” I think those moments, because they were on our minds, became a lot easier to write about. As we’re aging and really doing a lot more looking up into the sky and going, “What the fuck am I doing with my life?” that idea, the vastness of the universe, is really vague and seems too big to take on. But because of it, there’s so much at the forefront of our minds. The very nature of it is in these small, specific examples. I don’t know how to not write about it.

The record takes its name from a Margot Adler ritual book, and the website encourages you to take part in a six-step online ritual. What drew you to the occult, and how did esoteric preoccupations with things like paganism and druids shape the album?

I’ve written about Catholicism a lot because I grew up in the Catholic Church and I really didn’t have a good time with it. [Bandmate Eric Hudson] brought up the idea of, “You yuck Catholicism all the time, you’ve established you don’t like it, why don’t you try to find what you do like or what you could believe in?” I’m obsessed with fantasy and role playing games and magic and all of these things that take their inspiration from actual magic and paganism and witchcraft. Those are the cornerstones for all the things I love so much. So why not have the aesthetic and vibe of the album have a sort of Dungeons & Dragons feel to everything? 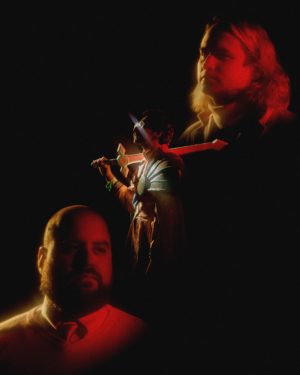 It definitely feels like you were doing a lot of world building. What was your process in the studio?

Eric, our guitarist, co-produced Nearer My God with Chris Walla, and he was the lone producer on this one. Eric is so unbelievably good at what he does, but during this record, he mastered how to make a record for us better than anybody has. Part of that is that he’s part of the band and he knows what we want, but I think what he did on this album was extremely impressive. One thing we did a lot of the time was try to make pop-leaning songs. But what pop is for us is so different from what pop is currently—what it is to us is something from years ago, especially as it relates to indie rock bands. What you’re left with is these songs that sound sort of like Passion Pit.

I’m glad you brought up Passion Pit because that was exactly the type of indie pop music that I grew up on that I hear a lot in this record.

Arcade Fire or TV on the Radio’s Return to Cookie Mountain… There’s all these records that were huge to us that were successful, and to us that meant they were popular. One we always talk about is “My Girls” by Animal Collective. It’s a huge song, and when you listen to it you’re, like, “That was a huge song? That’s crazy!” Because now we’re put into such boxes as it relates to pop music.

The song “Go Down Together” is a perfect example. It’s the poppiest song on the album, but when we were making it we were like, “This is never going to be on the radio or anything. It doesn’t belong with what goes on the radio now.” Any moment where we were feeling like it was too poppy, I think we did what you were just describing, in trying to make it more full and huge. That’s always the attempt to cover up something that feels like it might be a cash-out kind of song. Especially knowing that it will never cash us out.

“One thing we did a lot of the time was try to make pop-leaning songs. But what pop is for us is so different from what pop is currently—what it is to us is something from years ago, especially as it relates to indie rock bands. What you’re left with is these songs that sound sort of like Passion Pit.”

You brought in members of Manchester Orchestra to help record the album. How did that collaboration come together?

We’ve done two tours with them before. The first one was in support of A Black Mile to the Surface. When we did that tour, we were finishing demoing Nearer My God. We were showing them demos and we were all excited and getting to know each other. They were so good to us and we got along so well. I got to talking with Andy [Hull] about lyrics and songwriting as it related to these songs and this album. At a certain point, we made it an official process. We went to Georgia to go to their studio and it really solidified this thing where they’re like a big-sibling band to us.

With the record out, what are your goals looking forward?

I want to be able to bring it on the road and play it in front of people. Beyond that, I really hope that it does something for someone. With every album that we’ve made, I think there’s always been this response that’s been so amazing where someone shares a story about how it helped them out in some way. I really hope that happens with this one. We’ve put more work into this album than anything else we’ve ever made. I want it to be somebody’s favorite Foxing record. FL 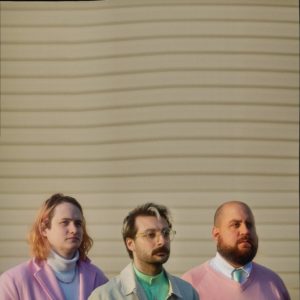