The first in a three-part interview series on the future of Quality Control Music—the label that launched Migos, Lil Yachty, Lil Baby, and City Girls—starts at the top with a conversation with the rap-dominating label’s CEO and COO.
Menu

The first in a three-part interview series on the future of Quality Control Music—the label that launched Migos, Lil Yachty, Lil Baby, and City Girls—starts at the top with a conversation with the rap-dominating label’s CEO and COO.

For our series on the trailblazing music label, we knew it had to start with Coach K and P—the artists bring the attention, but the stage was built by them. In the coming weeks, we’ll be featuring exclusive live sessions and profiles on some of the rising stars of Quality Control—including Duke Deuce, Metro Marrs, and Lakeyah, among others—examining how they fit into the pitch-perfect ethos created by the two bosses of rap’s hottest label.

Kevin “Coach K” Lee and Pierre “P” Thomas didn’t become two of the top moguls in hip-hop by half-assing it. It’s only fair that the artists they hand select to join their Quality Control Music roster put in the same effort. “If you’re not working twice as hard as the next dude, you’re not gonna make it,” P tells me defiantly. Coach concurs: “That work ethic comes from seeing how fast this stuff comes and goes. It comes from seeing if you don’t have that hustle no one is going to just hand you something—and even if they do, it can go real quick if you don’t have that grind to keep at it.”

When Coach and P started Quality Control in 2013, they assembled a roster of regional talent bubbling in the Atlanta scene. The duo always had an eye for prospects, and they parlayed that unique gift into a label that focused on promotion and management. The formula was simple: Find artists in Atlanta who were making some noise, throw all the resources they had at these young stars, and build them into the hottest acts out of the city. Somewhere along the way, though, Coach and P found themselves atop an empire; in the late 2010s into today, a co-sign from Quality Control practically meant chart-topping success.

From the label’s first mixtape, 2014’s Solid Foundation (hosted by DJ Drama), P and Coach flexed their muscles within the ATL. New to the label scene but deeply involved with the business, the duo were able to assemble an all-star roster for their formal introduction. P had started a label before QC called Dirty Dolla and used its failure both as motivation and a learning experience. Coach was involved in the day-to-day movements of the Atlanta scene, serving as a manager for artists like Gucci Mane, Pastor Troy, and Young Jeezy. So it was no surprise when that first tape featured Gucci, Rich the Kid, and a local group getting ready to pop off by the name of Migos. From there, the duo had a proof of concept and a path toward success. The next step? Using Atlanta’s white-hot scene to become a national power player on par with the major labels with billion dollar bankrolls.

The duo had big ambitions, but what makes QC different from other power players is the attention to detail they pay to each artist. “We’re extremely hands on,” explains P. “‘Quality control’ is in our name, we need to make sure everything we put out represents the excellence we’ve established.” Coach dives into the nuances, saying, “All artists are different, but I’m definitely very hands-on and in constant communication with most. We listen to music all the way through, help put together collabs, and give our thoughts, but it’s also a balance to give space and let an artist do their thing. It depends so much on where they’re at in their career and just what their individual process is like.”

For our series on the present and future of Quality Control, we wanted to dive into the way the label functions, and how two highly motivated individuals helped shape the landscape of 21st century rap music. With Motown and Caroline distributing Quality Control Music’s catalog, P and Coach have been able to run the company as CEO and COO, respectively, while still managing the day-to-day of the various artists on their roster. This is a tailor-made experience, and both bosses know that there’s no one-size-fits-all way to run the label. But there is one thing both P and Coach and their artists have in common: They’re self-starters.

“We’re extremely hands on. ‘Quality control’ is in our name, we need to make sure everything we put out represents the excellence we’ve established.” — P

Take a look at some of the emcees the group reps: There’s Lil Yachty, who turned internet virality and a one-of-a-kind POV into a sprawling media empire. Duke Deuce is almost single-handedly reviving crunk music in Memphis after a decline in the mid-2010s. Lakeyah is turning Milwaukee into one of the most exciting destinations for rap in the Midwest after the city was practically dormant on a commercial level for a number of years. Metro Marrs seems poised to carry the torch from this generation of superstars, like Young Thug, Future, and Lil Baby. Speaking of Baby, it was only because of Coach  and P that he began rapping in the first place. Everyone in Atlanta knew Lil Baby because he was active on the streets. He’d roll through P’s studio just to hang out. It wasn’t until they suggested he rap that he took up the mic. Now? He just happens to be one of the hottest rappers on the planet.

Communication is the thread that ties the entire operation together. It’s one of brutal honesty and unrelenting drive. P and Coach are brothers, but that never gets in the way of tough conversations. “P and I are talking non-stop! That’s my guy and we are incredibly close friends and business partners. Our connection has grown huge over the years with all we’ve gone through and built together—it’s the foundation of all we do.” P notes something similar, saying that the foundation of the entire house is built upon the way he and K operate together. There’s a symbiosis, a give and take, an almost telepathic working relationship that allows each of them to approach each signing with a fresh perspective. 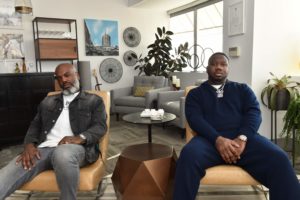 It’s also allowed them to think bigger than music. With their special relationship, Coach and P have their eyes on global domination. Quality Control already has a sports arm, repping athletes in football and baseball―including superstar running back Alvin Kamara. “QC in five years will be dominating in sports, film and TV, and tech. These moves are already launched and doing great,” explains Coach. “We have multiple verticals with some of the best people in the game put at the helm by us to help grow this empire P and I have created and want to see flourish. There will be dozens of sectors we’ll be operating strongly in.” It’s ambitious, but Coach and P haven’t failed yet—and don’t expect them to come up short any time soon.

For our series on Quality Control, we knew it had to start at the top. The artists bring the attention, but the stage is built by Lee and Thomas. They’re the captains of the ship, sailing steadily along, always leaping over the logical next step to some grand creative idea. In the coming weeks, we’ll be profiling some of the rising stars of Quality Control and examining how they fit into the pitch-perfect ethos created by the two bosses of rap’s hottest label. One thing is for sure regarding these artists, though: They all work their asses off. Coach and P wouldn’t have it any other way. FL