In Conversation: illuminati hotties’ Sarah Tudzin Climbs to Her Peak on “Let Me Do One More”

In Conversation: illuminati hotties’ Sarah Tudzin Climbs to Her Peak on “Let Me Do One More”

illuminati hotties’ Sarah Tudzin knows how to open a record. Whether it’s the distorted, somber reflection of her first record Kiss Yr Frenemies (“Your shortlist goes on and on, it’s filled with things I couldn’t do”) or the referential, cheeky burst of energy that opened last year’s breakneck FREE I.H.: This Is Not the One You’ve Been Waiting For (“Let’s smash to a podcast, tomorrow mornin’ we’re cryin’ into a Denny’s Grand Slam”), she knows how to set a mood. Still, she might have outdone herself this time. “In every life there is a bell, one rounded curve of time or tell / I’m on the left half looking over,” she sings on “Pool Hopping,” the strong Song of the Summer candidate that opens her new album Let Me Do One More. And what an opening image that is—a singular moment amidst the gleeful sprint to the peak of her burgeoning career, a moment to glance over to the other side and scoff, come what may.

Of course, that leaves the left side of the curve behind her, all that came before One More. And Tudzin’s is not exactly a climb littered with failures—for someone who’s spent most of their career behind the scenes as a producer and engineer for the likes of Weyes Blood and Sad13 (not to mention Slowdive and Logic), her first record was met with almost universal acclaim. Then came last year’s mixtape, a release necessitated after illuminati hotties got caught in the mess that was Tiny Engines’ swift fall from public grace. This left Tudzin with the dilemma of how to remove herself from that debacle without facing the legal hurdles of a contract breach. In came the aptly titled FREE I.H., another rousing critical success which found Tudzin embracing the messier, louder, more confident side of her songwriting.

Which brings us to this moment, as Tudzin finds herself a part of the loyal and supportive Hopeless Records, set to release Let Me Do One More. This, as it turns out, is the one you’ve been waiting for, and thankfully it was well worth the wait. Both brash and perceptive, snarky and raw, Let Me Do One More finds a middle ground between the band’s first record and last year’s mixtape. We caught up with Tudzin ahead of the record’s release to discuss the value of keeping things brief, “tenderpunk” making it into the New York Times, and how playing live helped her grow as a songwriter.

I understand Let Me Do One More was mostly in the bag before last year’s mixtape was written and released. Can you tell me a little bit about the difference in writing this album and frantically writing Free I.H. over the course of a few weeks?

A lot of 2019 we were on tour and I think just between tours and over the course of being on the road I put together a bunch of song ideas I was playing with which would eventually become One More. Things kind of fell apart at the end of 2019 with Tiny Engines, which was when I decided I needed to act quickly and figure out how to exit that deal appropriately, so I spent the early part of 2020 on Free I.H. and once that was kind of zipped up I tried to pivot back to One More to finish up whatever needed to be finished.

“A lot of the live show fed into shaping how far I could push the edges on this album.”

Can you tell me a bit about your Hopeless imprint Snack Shack Tracks and why it was important for you to take a little more control in the release and distribution of your music?

I’ve always wanted to have some sort of label or curate a small list of bands I really love and want to work with. Luckily Hopeless came on board and gave me the opportunity to start an imprint under their umbrella. So now I’m sort of in this dream scenario where I have creative control over my own records as well as the resources and the people from Hopeless, who have been really supportive and awesome.

I saw “tenderpunk” got one of those NY Times First Said hits—can you describe what that tag means to you and where that came from?

I was so stoked to see that. I followed that account for a really long time because obviously it just tweets complete chaos all the time. I remember saying to my friends, “Man, that’ll be the day when they tweet ‘tenderpunk,’”—and then they did it! I actually saw that before I saw the Times roundup article we were in and I was initially like, “Where is this from?” But then it was about the record which was great and exciting. Tenderpunk has always been the ethos of the band; just being punk, finding alternate routes and trains of thought to what is the norm, and also just being considerate, sweet, and warm. 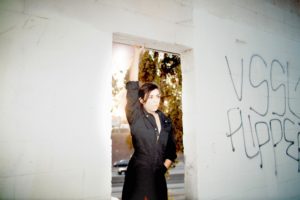 I can also see how “tenderpunk” really describes the band’s sound, how you’re able to hold these opposing ideas within a single record. One song I found particularly interesting in this regard was “u v v p,” this kind of country-western-inflected pop song. Can you tell me a little bit about that song and how the collaboration with Buck Meek came about?

That song was kind of a wild card for a while. I really wanted to make a ’60s girl group kind of song, like The Ronettes or The Shangri-Las. I added all these guitars on top of it and all of a sudden it was very “Kokomo”-adjacent. It became this weird connecting point between what I wanted to make and what it was turning into, which is interesting to think about just in the scope of music. Where surf music intersects with Motown and rock and country—they’re all sort of drawing from similar color palettes. So I just followed it down that path and was really excited by the country/surf crossover that came out of that. Then I had this outro at the end of it where I was thinking about how I would love a Sam Elliot kind of cowboy character to read some narration over the end. I couldn’t really think of who would be good for it until I was listening to Buck’s record and it was just like, my god, this is the voice. Perfect, twangy lonesome traveller. So I sent him an email and he sent me back some awesome narration.

You’ve talked about how the first record felt kind of reserved, what do you think has changed in the years since that allowed you to write a song like “MMMOOOAAAAAYAYA”?

Playing live a lot more definitely helped. I feel like it was the easiest way to see firsthand the way people interact with the music. You get instant feedback on whether something is working or not. Also, you have a band playing it, so you have musicianship determining where you’re going to go with a song. I was playing around with what was fun to play, what worked, what didn’t, and just getting more comfortable in front of the mic and leading a band, which I think was huge. That has grown immensely, especially since the time Kiss Yr Frenemies came out mid-2018. A lot of the live show fed into shaping how far I could push the edges on this album.

Speaking of that song, what inspired the idea for the video, and what is that slime made up of exactly?

My director Katie Neuhof was so kind and supportive during that process. She put together three buckets full of oatmeal, applesauce, green dye, and Jell-O pudding powder. It was the most horrid thing, and not fun to have poured all over myself. It’s basically an homage to the D’Angelo music video, but I wanted to play with the boundaries D’Angelo had laid out as far as sexuality and power and performance. His video is just unbelievable and he looks unbelievable and I wanted to infuse a little Nickelodeon into that.

When did “Pool Hopping” come in the writing process, and why did it feel right as the opening track on the record?

The “Pool Hopping” riff that starts that song is something I’ve been playing around with for a while. That song was made in quite a few pieces, but when I finally connected them all together it just made so much sense. It was so easy to visualize all the production behind it once I figured out all the pieces. As far as starting the record, it just seemed like an awesome opening statement. I love to think about the first lines on an album. I love to hit people over the head with something exciting and I hope we did that.

“I love to think about the first lines on an album. I love to hit people over the head with something exciting and I hope we did that.”

This record specifically can oscillate between mood and energy levels, so did you look at sequencing as an important factor in setting the overall mood?

Totally. I don’t want a moment to be taken for granted while I’m listening to an album. I definitely sequence really purposefully to try to keep people’s attention. I try to think about the psychology of moving from tempo to tempo or key to key musically. I tried a bunch of things that didn’t work, but this kind of seemed like the ultimate way to do it. I love how cinematic that whole process can be.

I really love “Toasting” despite—and maybe because of—its brevity, but I was wondering what went into the decision to cut that one off at the root like you did.

It felt complete, like I’d told the whole story. It was a song form that was quite familiar—A A B A, two verses, bridge, chorus type thing, then a verse. That’s all it needed. I’ve always thought I’d rather end a song when I have more to say or when the thought feels complete as opposed to beating a bunch of lyrics over the head just to fill a certain time stamp or common structure. I’d much rather listen to a song that’s 30 seconds and love it and want to play it again than listen to an eight minute drone. FL 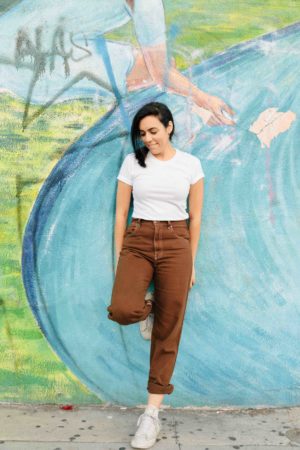