Barnett’s third solo record intermittently taps into her strengths, but it scans like a transitional record.
Menu

Barnett’s third solo record intermittently taps into her strengths, but it scans like a transitional record. 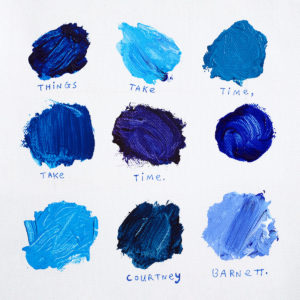 Things Take Time, Take Time, Courtney Barnett’s pleasant but slight third solo album, subverts the COVID-era album stereotype in a disorienting way: the artist’s mood has brightened. Recorded in early 2020 as the pandemic’s outlook darkened and most everyone faced grim isolation, Things Take Time is a surprisingly sunny offering from a songwriter whose voice is most often characterized as sardonic and biting. Barnett’s writing is no less observational and sly, but her positivity is jarring; it may cause double takes for those accustomed to the sharp humor of her earlier work.

Barnett’s newly upbeat perspective is not inherently a bad thing. The more troublesome snag is that most of these songs are sleepy, leisurely, unbothered. Sometimes I Sit and Think, and Sometimes I Just Sit, Barnett’s breakthrough record, had a clear family of influences, from its approachable, vividly drawn folk to its psychedelic guitar freak-outs. Take Time is much more nondescript, an album inclined to luxuriate almost exclusively in the tempos of slower Barnett songs like Sometimes I Sit standout “Depreston.”

Barnett is most dialed-in when she’s wielding her observational eye, as on opener and lead single “Rae Street,” which acknowledges a certain inescapable malaise even while refusing to be defeated by it. “Sunfair Sundown,” which exists at the blossoming of a new crush, is similarly sharp. It seems in search of a hook, but its world is accessible and cozy. Most of the album is, in fact, but these songs too often fail to arrive at a compelling endpoint. “Here’s the Thing” has some nice passages about insecurity and longing, but musically feels tentative; the brevity of “Take It Day by Day” is refreshing, but a final act would likely lend it more weight.

Things Take Time, Take Time intermittently taps into Barnett’s strengths, but it scans like a transitional record. Several of these songs are perfectly successful as sketches, but are a few strides away from being fully formed. Barnett’s evolving perspective as a lyricist is welcome, but sometimes her positivity spills into platitude territory, an impediment the songs themselves are not sturdy enough to weather.