Page to Screen: Creating an Episode of “Maron”

Marc Maron explains what it takes to get an episode of the IFC hit from his brain to your television set.
Menu

Film + TV
Page to Screen: Creating an Episode of “Maron”

Marc Maron explains what it takes to get an episode of the IFC hit from his brain to your television set.

On an unusually cold and damp day in Los Angeles, FLOOD went to visit standup comedian and Highland Park neighborhood ambassador Marc Maron on the set of his IFC sitcom, Maron. In between rehearsals, lunch, and several takes of an upcoming season three episode, we spoke to the WTF Podcaster General about how the everyday moments of his real life—or “for realsies,” as he would say—turn into the carefully crafted, disarmingly intimate, and just plain hilarious show that bears his name.

I don’t really know how most TV writing happens, but [for Maron] I’m involved in all levels of the creative process—mostly because I’m not naturally refillable, and I’m sort of particular. This is how the writing process works for our show… 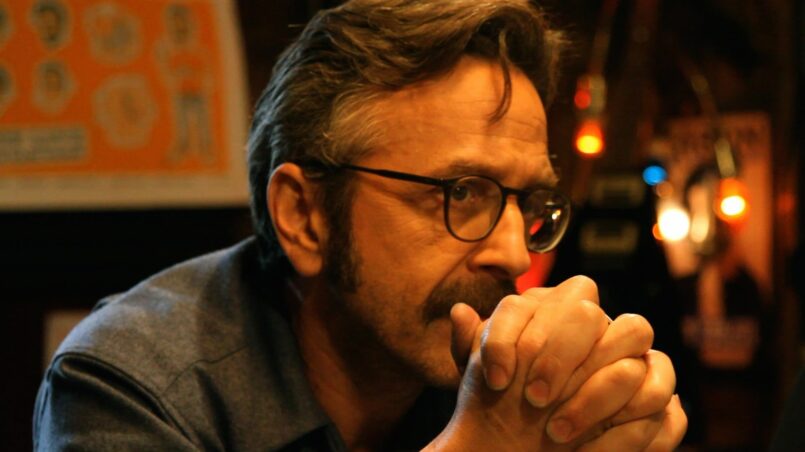 Get the white board out and break stories

I meet with the guys and for about two months we break stories. I have a lot of stories from my life that are based on events or half-stories, or just an event that needs to become a story. We just sit in a room, get one of those dry-erase boards, and start breaking story: we put a three-act structure up there, three columns, and we have the beats of the story. We get pretty thorough.

Write a script
After we break story, we send that information to whoever is assigned the script and they outline it. We go over the outline together, and then they go write—then we all go over the script.

Trust the writer and director
[The writing process] is fairly collaborative, but once a writer takes the outline and starts to chip away at the script, the stronger writers have a certain tone. I think you can see it and I think you can sense it. Some of the directors have a strong tone, also…but the writers are all great: Jerry Stahl, Dave Anthony, Sean Russell (who was a writers’ assistant last year and is now staff), and the showrunners, Michael Jamin and Sivert Glarum. It’s a good combination; we all come from different disciplines and different points of view. 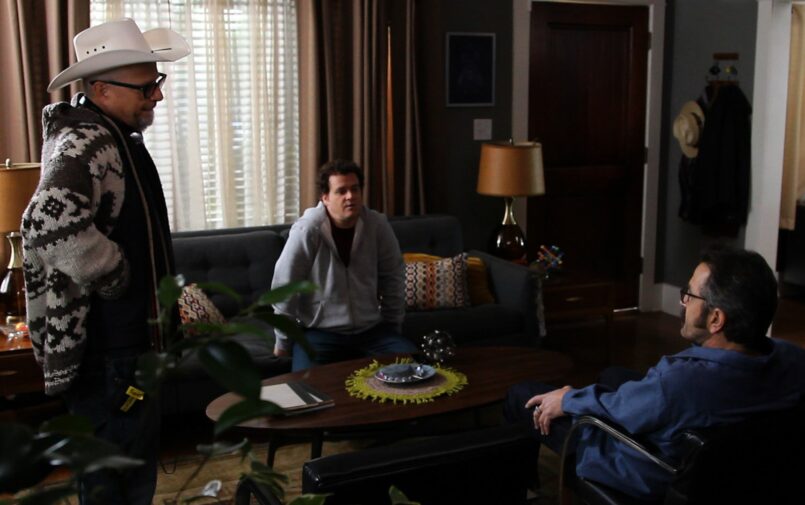 Embrace the improv
A lot of the time, what’s coming out of my mouth [on the show] is improvised in the room. I’ll riff with one of the guys—or in front of the guys—and we’ll just take a lot of what’s being said directly. Like, a lot of the podcast portion [of each episode] is me talking freeform in the room, which we basically transcribe. Some of it we actually do on the fly.

Know your protagonist
There were a lot of things I knew going into [making this show]. My success—or, really, my opportunities—has come really late in life in a way, at least in terms of my professional life, so one thing I knew was that I was certainly ready. I wasn’t afraid, but I knew that there was going to be a learning curve around my acting, around my writing, around having never done a TV show, and just being OK with that… That’s where it all becomes sort of helpful to pitch with a bunch of people about where we want the story to go, or how it will really work.

We know the character of me. I know what he can and can’t take, or what he will or won’t do, so it’s really all about trying to open him up to the possibilities of the story. It’s really kind of exciting how [the scripts] evolve. And sometimes they evolve until the day that we’re shooting.

Get the scripts finished before filming
I like to have all the scripts done before we start shooting. I don’t want to be part of a rewrite process because I have to be in every scene, and that is very taxing. I learned after the first season that the only thing that I really cared about was having the stories broken and the drafts done by the time we shoot.

Don’t worry about comparisons
I knew going into it that there were initially going to be comparisons to Louie because he’s doing the show—the standup comedian show right now—because Seinfeld is gone, and Larry is gone…there’s a lot of that, where people play themselves, like Garry Shandling, or whoever. I knew that in the culture we live in now, I would be compared to that. We were fortunate that Louis [C.K.] took a year off during our first season so [the comparisons] were there, but they weren’t so vital, and by the time the second season rolled around, [Maron and Louie] were very clearly different shows and different personalities. It’s very odd to me what people think and do because, yeah, we are both comedians, but our lives are distinctly different!

Be Marc Maron
I try to make [everything I do] pretty intimate. I do feel like I take emotional risks in doing my things the way that I do them. I seem to want to engage with audiences and people on the show more so than long-term situations. I seem to be more intimate with people in passing than I am with people who are in my life for realsies, so that’s just the way it works for me. [Laughs.]

I don’t know if that’s healthy? But it is unique. With the TV show, I don’t sit there and think, “I need to make this more intimate,” but I think the problems that are either in my head or in the small world that I operate in are pretty genuine. I think there’s an intensity to how I am, which I think drags people into more intimacy—through too much information or too much vulnerability—than they might want to be in, but that’s just sort of the way I live. It’s probably pathological on some sort of level, but I don’t seem to really want to fix any of it, you know? FL