LISTEN: Beirut Shares Title Track of Newly Announced LP, “No No No”

LISTEN: Beirut Shares Title Track of Newly Announced LP, “No No No”

Zach Condon—the frontman and mastermind of the whimsically baroque, indie-folk project Beirut—has announced the details of the band’s fourth full-length No No No and shared the record’s title track. Beirut’s first album in four years, following 2011’s The Rip Tide, will be released September 11 on 4AD.

The brand-new title track has the familiar Beirut mix of Balkan folk, electronic elements, and Condon’s signature vocal melodies that we’ve been missing for a few years now. Bob along to “No No No” below.

According to a press release, the songs on No No No were written after a long period of writer’s block induced by Condon’s deteriorating mental and physical health following a three-year stint of nonstop touring and a messy divorce. (That explains the steely-eyed, weary stare we see in the photo above.) Condon was rehabilitated by falling in love and moving briefly to Turkey, which sure sounds like the makings of a great album.

Condon has also announced a tour in support of the upcoming Beirut LP. See the full list of North American dates below, along with No No No‘s tracklist and artwork.

No No No tracklist 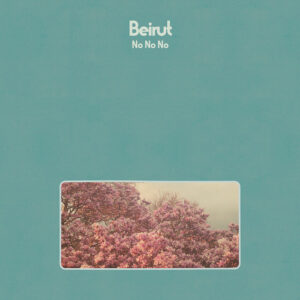