The Gears of Reincarnation: On David Mitchell’s “Slade House”

The celebrated British novelist returns with his followup to 2014’s “The Bone Clocks.”
Menu

The celebrated British novelist returns with his followup to 2014’s “The Bone Clocks.”

As is now abundantly clear, David Mitchell’s novels all find their place, eventually, in the same universe (or “multiverse” as it’s now more commonly known). Certain names keep appearing. Certain characters keep recurring. And despite his novels’ dancing in and out of different genres and epochs, his readers are increasingly aware that no matter how foreign these worlds may seem, we will always see the same stars overhead.

The dawning consciousness of this underlying order has provided a thrilling subplot to his work—especially over the course of his previous two novels to operate in this vein, Cloud Atlas and The Bone Clocks (the historical novel The Thousand Autumns of Jacob De Zoet came between them)—and it also goes some way toward accounting for the intense following Mitchell has earned over the course of his career. His books have been huge critical and commercial successes, and they have inspired heated debate at bookstores and on web forums in equal measure. This makes a kind of sense: literary types are notorious consumers of mysteries, forum-dwellers love a unified theory, and what is a unified theory if not the answer to a deep and abiding mystery? But our obsession with Mitchell’s work is also rooted in something far more familiar: namely, his riveting characters and voices. 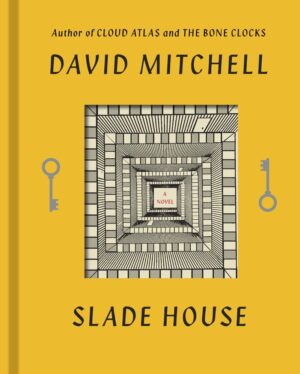 Slade House came as something of a shock, as the novel began on Twitter rather than the page. Nevertheless, Mitchell’s skills as a scene-setter and ventriloquist are there from the start. From the first line of the opening chapter, “The Right Sort,” you can hear the easy, intimate speech patterns common to so many of Mitchell’s accidental storytellers: “Whatever mum’s saying’s drowned out by the grimy roar of the bus pulling away,” young Nathan Bishop reports. And in the next section, a detective looking into Nathan’s disappearance speculates about how “unchuffed” his superior would be about his recent behavior. That single word shows how easily Mitchell seems to find poetry and personality in even the most hackneyed language.

In addition to this tonal trademark, the form here is also familiar: Slade House shares with Cloud Atlas and The Bone Clocks its fragmented, chronological, polyphonic structure. There are five stories in this book, and we thus watch helplessly as five different characters present themselves to us and then march with shocking swiftness into the hands of Norah and Jonah Grayer—two merciless, soul-sucking twins. I say “helplessly” because in addition to offering some very convincing slices of everyday life, this is also a book about tempting fate and succumbing to it. It’s about doomed lives and their legacies. It is, in other words, a ghost story.

All of our protagonists are pursued by ghosts, and these ghosts are both metaphorical and literal in nature. The vampiric Grayer twins are quite real, but they feast upon their victims by preying upon their insecurities. After luring people into Slade House (a haunted mansion which, in typical Mitchell fashion, only materializes once every nine years, on the last Saturday of October), the mansion offers a mediated reality that shows its victims an alternate version of their own lives with the slings and arrows of the past corrected; consider it the dwelling place of a more malevolent Ghost of Christmas Past.

It’s in the house that Nathan Bishop, in 1979, finds a sympathetic rival who shares his weird ability to see what is perhaps not there and communicate what is not said; Detective Inspector Gordon Edmonds, in 1988, finds a femme fatale to match his own noirish persona; Sally Timms, in 1997, finds a suspiciously accommodating lover; and so on.

Dr. Marinus, a character who has achieved substantial stage time in Mitchell’s most recent novels, and who acts as a kind of time-travelling, shape-shifting mentor to lesser supernatural beings, plays an important role in Slade House as well, and her arrival is affecting both within this particular novel and within the larger multiverse. But it comes at a cost, as her own recurrence also requires a more explicit accounting for the mechanisms of reincarnation that were first hinted at in Cloud Atlas. That novel only whispered what The Bone Clocks said and Slade House seems to scream: that reincarnation is real, and that it is fantastic.

What is a unified theory if not the answer to a deep and abiding mystery?

The Bone Clocks focuses more on the “good team”—the “Horologists” who have the ability to “transverse,” in death, into formerly doomed bodies and live again in new forms. Slade House, for its part, takes special care to explicate the process by which their rivals in the “Shaded Way” consume the souls of others in order to extend their own lives. I’ll leave Mitchell to fill you in on the particulars of this process, but suffice it to say that the Grayers’ form of immortality requires the imbibement of “Banjax,” and that only the souls of the “engifted” provide a sufficiently wholesome meal.

This gradual slide into explicitness seems inevitable now, given Mitchell’s reluctance to frustrate his audience (in return for their time, Mitchell has said that he wants to “give something back, and I want it to be an enjoyable experience”), but it is also a surprise to see the author exposing his secrets so willingly. We don’t need to see or understand the workings of a clock to know that it works. It bears itself out, and there’s a pleasure in that, even if we can’t reengineer it ourselves. Mitchell’s multiverse has only ever been vital because of the characters the populate it, and Slade House seems to have moved the focus over to the machinery that governs their lives.

But before letting this matter drop, it should be noted that this is a story that, like any good ghost story, lingers on after it ends. As noted earlier, Slade House began on Twitter, with its first portion, “The Right Sort,” appearing under Mitchell’s own account. Since that time the author has created another account for @I_Bombadil, and Bombadil, as it happens, is a character who meets his end in the final portion of Slade House. (This sounds like a spoiler, but his own life is purely incidental to the novel.) When the book was published, on October 27, 2015, Bombadil was still blithely tweeting away about his upcoming visit to Slade Alley—tweeting from beyond the book and beyond the grave. He continues to live online, and the effect is truly ghostly. 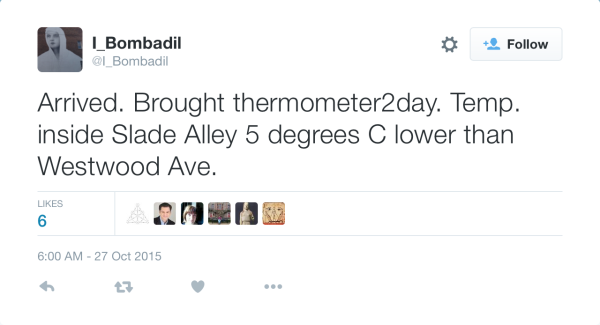 There is a fair amount of meta-content in Slade House, as well as in Bombadil’s Twitter account (“have u never heard of an “UNRELIABLE NARRATOR”? JustFGoogleIt”). Early on, for instance, young Nathan Bishop reveals the following:

“Mrs. Todds my English teacher gives an automatic ‘F’ if anyone ever writes ‘I woke up and it was all a dream’ at the end of a story. She says it violates the deal between reader and writer; that it’s a cop-out, it’s the boy who cried wolf. But every single morning we really do wake up and it really was all a dream.”

All of the soon-to-be-ghosts in this recently published novel share a common yearning: they seek to recover and repair the past (or “what was,” according to the haunted clock within this haunted house). But the past is not recoverable—not in the real world, at least—and this is an impossible dream. Nonetheless, as Mitchell notes, all dreams are impossible, and all dreams are real.

That same tension is at play in our everyday lives, but it is especially acute online, and if there is any depth to Slade House—and I think there is—this is where it lies. In @I_Bombadil Mitchell has once again taken up a seemingly impossible challenge. He has taken a stillborn fictional character—a character that is dead even within the confines of his printed book—and believably resurrected him.

That fact alone may not save the book, it does show it in a new light. Mitchell is clearly an author who revels in formal challenges. Holding readers’ interest while telling them the same thing may not be especially original, as far as challenges go, but he has come up with a truly ingenious solution.