The breakout star of the FX show’s second season talks about his character’s rise to the top of the show’s hierarchy of violence and what it means to be the sole black actor in a snow-white world.
Menu

The breakout star of the FX show’s second season talks about his character’s rise to the top of the show’s hierarchy of violence and what it means to be the sole black actor in a snow-white world.

Though the scene doesn’t end in bloodshed, viewers will likely white-knuckle it from the first frame to the resolution; it’s one of the tensest scenes in recent TV history, even though all it amounts to is four men on the side of the road, having a testy conversation.

The stakes are high, and Milligan knows it. According to Woodbine, his already iconic, afroed enforcer spends the whole interaction running numbers and weighing costs. “He realizes that to escalate to violence at this early stage would have major repercussions,” Woodbine says.

It’s an interpretation that’s fully in keeping with Woodbine’s broader take on the character—and the show in general. Though some viewers may leap to the conclusion that Milligan is a psychopath, Woodbine sees him as something far more complex, insidious, and ultimately dangerous: a man of almost limitless enterprise.

Ambition, Woodbine says, was his watchword with the character. “He’s all about getting the job done. Everything he does is in some way related to his endgame. There’s going to be things in the series that people classify as evil and they may come to the opinion that he’s a bad guy. I see him as a fully realized being, but the very essence of [Milligan] is setting goals and achieving them.”

That much is evident in how Woodbine plays the character. His Milligan could have been borderline deranged, but instead he’s cool and calculating, always moving at a brisk clip and seeming to have half his attention focused on his next task.

In Woodbine’s mind, Milligan is a man who’s seen and done a lot of things in his pursuit of success, which goes a long way toward explaining the fluttering vocal inflections Woodbine uses for the character; the aw-shucks Midwestern lilt that forms his voice’s base can turn on a dime to a more menacing intonation.

“The way I see Mike Milligan is that he’s a man from different backgrounds,” says Woodbine. “He’s not necessarily from the Midwest. He’s not from around here. Life has led him many places. He’s a well-traveled man, a well-read man. Like a lot of people I know who grew up on Army bases and such, he’s picked up manners of speaking that betray just how many places he’s been.”

But if Milligan is a character of lofty dreams and unchecked drive, Woodbine says that he is, at least in part, mirroring the culture around him. After he sleeps with Simone Gerhardt, of the show’s infamous Gerhardt clan, she wakes up reflecting on the death of the ’60s ideal. Milligan offers her a brusque reality check, reminding her that the “’70s came on like a hangover.” The scene captures Fargo’s second season in a nutshell; every character here conveys a sort of creeping unease—a deep fear that the world is spiraling out of control. 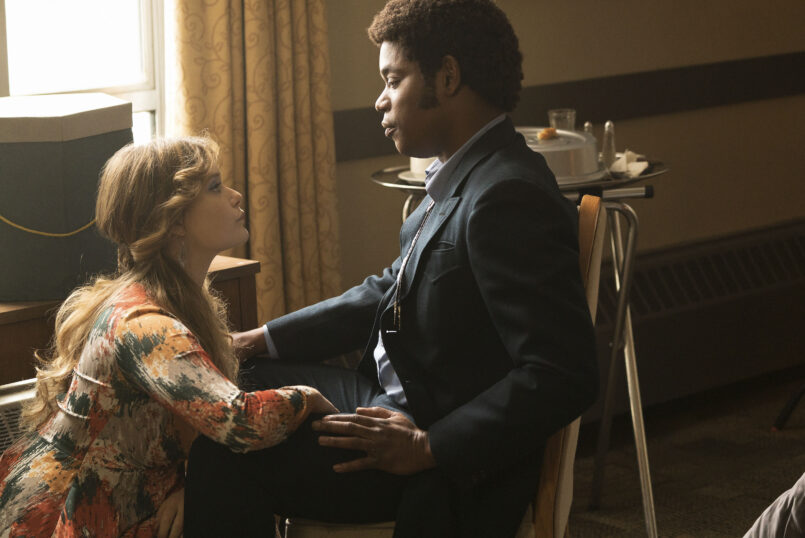 “I do think Milligan has been disenchanted, and when she’s bringing that up it almost reminds him of a more idyllic time—but he has a natural reflex that will not allow him to reminisce,” Woodbine explains. “He’s about today and tomorrow. Yesterday is gone. He takes pleasure in dismissing her childlike musings because it brings him a little bit of discomfort to remember a time when maybe he wasn’t so serious.”

But Fargo is set in the pre-dawn of the Reagan era, and Woodbine says his character’s seriousness is just a sign of the times. “I get the sense, for sure, that this season of Fargo is about growing up—the culture growing up and coming to grips with the fact that Mommy used to sleep with the mailman from time to time,” he says, adding that the show deals with the loss of Rockwellian ideals of American purity.

Woodbine—who was born in 1973—says, “I have some memories of the coming ’80s and how some people looked at Reaganomics as an ideal of prosperity, and some people were pining for the ’50s and thought their cowboy hero was going to bring that back. But for many of us, Reaganomics and the privatization of prisons, the massive influx of cocaine into the Americas… Having been a young man in the ’80s, it was like a splash of cold water in the face when government programs and subsidies and certain types of humanitarian sensibilities were replaced by an almost megalomaniacal corporate mentality, and people ceased to be seen as people and came to be seen as numbers.”

“Having been a young man in the ’80s, it was like a splash of cold water in the face when government programs and subsidies and certain types of humanitarian sensibilities were replaced by an almost megalomaniacal corporate mentality.”

Though the characters in Fargo may not see their era as a watershed American moment, Woodbine says the show’s writers are well aware of it, using “analogous dialogue for characters to express that [attitude]. It really was a major turning point in this country that people don’t like to talk about so much. It was a very different time, and I think this season attempts to capture that in a wonderful way. The party’s over.”

If the world of Fargo seems like it’s plunging into darkness, the world of Bokeem Woodbine is lighting up: the working actor has amassed countless TV and film credits over the past twenty years—perhaps you remember him as the shooter in TLC’s “Waterfalls” video—but his take on Milligan is finally turning heads and earning him the scene-stealer label.

Woodbine dismisses the idea that he’s the standout—“I think I’m just one part of an incredible cast,” he asserts—but he is proud to be the first prominent black character in what he dubs “the Fargoverse.”

“For me personally, I will say it’s not a soapbox moment,” he notes. “It’s not a raise-the-fist, Black Power salute—which I’m quite fond of doing, by the way. It’s not that kind of moment. It’s just, on a personal level, a sense of satisfaction and pride to be a black man, a hard-working black actor, who actually gets to be in this world that heretofore has been primarily Caucasian. I get a deep sense of satisfaction… It’s hard for me to put it into words because it’s such an off-the-wall thing. I’m still trippin’.”

That’s a measure of humility you probably wouldn’t associate with his Fargo character, but just as well: Woodbine’s ambition seems to be serving him fine. FL