The medical-show parody returns to Adult Swim this Friday, January 22.

Rob Corddry is being very off brand as he excitedly explains his new obsession: vintage tube amplifiers.

“Have you been rolling tubes yet?” he asks. Over the phone, he possesses no trace of the dickishness that defines his best-known characters—Lou Dorchen of the Hot Tub Time Machine series and Joe Krutel, the financial advisor he plays on HBO’s football dramedy Ballers—as he details his search for perfect tubes to enhance the sound of his collection of blues and soul vinyl. “It’s not a bad hobby,” Corddry says excitedly. “There’s worse things you could do with your time and money.”

Corddry is equally enthused to discuss the return of Childrens Hospital, the comedy he co-created and stars in, which returns for its seventh season on Cartoon Network’s Adult Swim on Friday, January 22. He’s clearly enamored with the show, which features Lake Bell, Malin Akerman, Rob Huebel, Ken Marino, Henry Winkler, Megan Mullally, and dozens more, and is known for its surrealism and blatant disregard for continuity. “The show’s M.O. is not to have any meaning,” Corddry laughs. “It’s just: Get to the funniest joke in the quickest amount of time.”

Here, Corddry reveals why the show works for him—and dishes on how great it is to be around The Rock (spoiler alert: very great).

How does it feel writing Childrens Hospital at this point, with six seasons of backstory to potentially engage or completely ignore?

We don’t really burden ourselves with backstories, luckily. [Laughs.] It feels different every season we write it. It really depends on my state of mind. [With] seasons six and seven, we really got into a groove. We started to use a writers’ room—a very small writers’ room—and we changed the shoot dates and the writing room dates so we could get really top-notch [network] writers when they were off. It feels like this is season two, almost. It’s a completely different show, or at least a different experience for me.

The show originally shot for TheWB.com and was inspired by things like House M.D., Grey’s Anatomy, and ER, right?

Sorta, yeah. It was just simply a parody of hospital dramas.

But the sense of absurdity was there from the beginning. Was any of that inspired by the source materials—shows like General Hospital—where these sorts of wacky plot devices are utilized?

No, not really soaps so much but definitely St. Elsewhere, which was my favorite show growing up. They took a lot of big swings on that show. But the surrealism and absurdism, that’s just what me and my partners enjoy doing. It’s not the most lucrative kind of comedy, but it’s just the way our brains work.

It allows you a lot of freedom. With a show like, say, The Office or something like that, people have these set ideas about characters they like, and so much of the humor comes from that established feel and our relationships with these characters. Childrens Hospital doesn’t have to worry about that as much.

The surrealism and absurdism, that’s just what me and my partners enjoy doing. It’s not the most lucrative kind of comedy, but it’s just the way our brains work.

That’s why a network show, with more of a through line and continuity—more, I guess, respect for their characters—will eventually fold in on itself. [Though that’s not true of] say, Seinfeld. Oh god, I want to make it clear: not comparing Childrens Hospital to Seinfeld. But [Seinfeld was a show about situations like] “Boy, don’t pencils suck when they break?” They could have done that show forever. Or The Simpsons, you know? Basically, [Childrens Hospital and Seinfeld are] versions of a cartoon.

Adult Swim picked up the show after that initial run, correct?

At that time, Adult Swim was stepping into live action stuff. Tim and Eric and Saul of the Mole Men were there, but you guys were really early on. At the time, did going with Cartoon Network feel risky or weird to you?

No, I never felt like it was risky. At all. Just because I had zero plans of doing this on television. I didn’t think it was conducive to the media. [It made sense on] Adult Swim, having that fifteen-minute format. 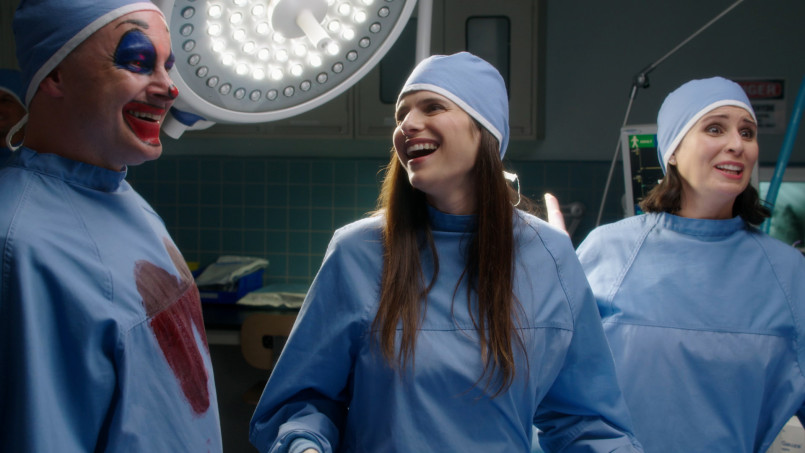 When you look at the landscape of podcasts and channels like Adult Swim, it seems that the doors have been blown open for comedy. Childrens Hospital was a big part of that. Do you get a sense of that at all?

I think there’re just more opportunities. It’s a great time to be a creator. It’s a great time to be a comedian or actor. There’s so much. The number of channels has quadrupled year by year and they all have a slightly different tone and you know what goes where. As for Childrens Hospital’s part in that: We were the first example of Internet becoming television. So that’s something. That’s a tiny tick mark in the history of television.

I never felt like it was risky. At all. Just because I had zero plans of doing this on television.

The show is irreverent, but it kind of represents these important things. And it’s really funny.

I feel like it’s getting better. Season five, there might have been a little dip, it wasn’t my favorite, but I really do feel like we’ve stayed pretty consistent and we’re at least having fun ourselves.

How many shows entering a seventh season can say that?

I haven’t watched Ballers as much as Childrens Hospital but I’ve started in on it.

It’s a different thing. If you like football at all, you’ll love it. And who doesn’t like The Rock?

He is the most charming and likable guy on the screen.

To be that likable on screen, you have to be uncommonly likable—effortlessly likable—in real life. I’ve met two people who are that: The Rock and Henry Winkler.

You get to work with both of them.

Yeah! Everybody else is a dickhead. Including myself. Self-serving narcissists. FL