An Op-Ed By Natalie Morales
Menu

An Op-Ed By Natalie Morales

Editor’s Note: Natalie Morales’ Op-Ed was written before President Obama announced his intention to travel to Cuba and is not in any way intended to be a response to the president’s remarks.

Just last week, I was at my friend Michaela’s house dropping off a bag of stuff I’m sending to my family in Cuba. Her husband, Fred, is visiting Havana and was kind enough to be my courier. Among the things I sent with Fred were two packages of Cuban coffee. Yes, that’s right: I’m sending Cuban coffee to Cuba. It’s absurd and hilarious and I got a real kick out of telling everyone I came across that day about it. This is because Cuban coffee is too expensive for the average Cuban to buy in Cuba. So they make do—Cubans always make do—reusing old coffee or grinding in some split peas if they have to get their fix. I, on the other hand, buy it for three bucks at Target.

Coffee is just one of the things my family in the States sends to my family in Cuba. Usually, monthly, we send money, medicine or syringes for the diabetic aunt (since the hospital doesn’t have any unused disposable ones), baby clothes, adult clothes, shoes, or food (there’s a website for Americans to buy food that is sent to Cuba, but at an absurd upcharge). They cannot survive without our help. For many Cuban-American families all over the States, this is just a regular part of life, another bill to pay each month. 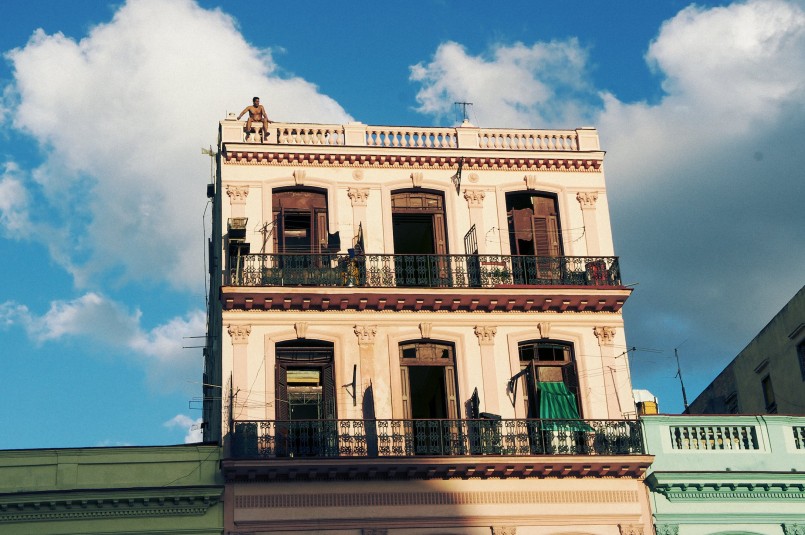 “A man sits on a roof ledge in Havana.” / photo by Natalie Morales

Here’s a terse explanation of why: a doctor, a lawyer, or another similar profession that is considered to be high-earning everywhere else in the world will make about twenty to thirty dollars per month in Cuba. Yet shampoo at the store still costs three dollars. This is because everything is supposed to be rationed out to you, but the reality is that they’re always out of most things, and your designated ration is always meager. And if you live off the land? Well, if you’re a farmer and you’ve raised a cow, and you’re starving, and your family is also starving, and you decide to kill that cow and eat it? You’ll be put in jail for life. Because it’s not “your” cow, it’s everyone’s cow. That’s good ol’ Communism in practice.

Now, knowing this, picture me at any dinner party or Hollywood event or drugstore or press interview or pretty much any situation where someone who considers themselves “cultured” finds out I’m Cuban. I prepare myself for the seemingly unavoidable “Ooh, Cuuuuuba”—as if the country itself were somehow a sexy woman or delicious food—followed by the inevitable, “I have to go there before it’s ruined!” I try to be polite, because I am aware that, oftentimes, people who think they are very thoughtful are the least thoughtful. So I ask, “What do you mean by ruined?” and they always say, “You know, it’s so cool looking! It’s stuck in time! They have all the old cars and stuff… Everything’s gonna change soon!” 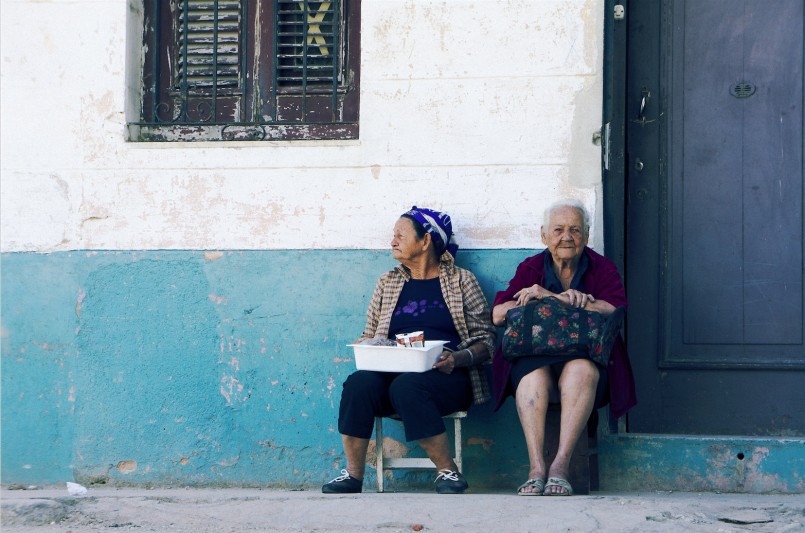 So depending on the situation (and how dumb I would like to make that person feel), I will say some version of this: “What exactly do you think will ruin Cuba? Running water? Available food? Freedom of speech? Uncontrolled media and Internet? Access to proper healthcare? You want to go to Cuba before the buildings get repaired? Before people can actually live off their wages? Or before the oppressive Communist regime is someday overthrown? Make sure you hurry and go observe these human beings in the time bubble that was created especially for you so that you could post a #nofilter photo of it on Instagram.”

If you want to go to Cuba, I want you to go. I do. But can I ask a favor? Be aware of what’s going on there.

Look, part of me gets it. I appreciate good art direction just as much as anyone else, and I see that Cuba looks like a beautifully destroyed photo op. But it’s not your photo op. The old cars are not kitschy; they are not a choice. It’s all they have. The old buildings are not preserved; their balconies are falling and killing people all the time. The very, very young girls prostituting themselves are not doing it because they can’t get enough of old Canadian men, but because it pays more than being a doctor does. Hospitals for regular Cuban citizens are not what Michael Moore showed you in Sicko. (That was a Communist hospital for members of the Party and for tourists, and I, for one, think Moore fell for their North Korea–like propaganda show pretty hard.) There are no janitors in the hospitals because it pays more money to steal janitorial supplies and sell them on the street than it does to actually have a job there. Therefore, the halls and rooms are covered in blood, urine, and feces, and you need to bring your own sheets, blankets, pillows, towels, and mattresses when you are admitted. Doctors have to reuse needles on patients. My mom’s aunt had a stroke and the doctor’s course of treatment was to “put her feet up and let the blood rush back to her head.” That was it. And this is in Havana, the big city. I can’t be sure, but I’d imagine things there are a lot better than they are in more remote parts of the country. 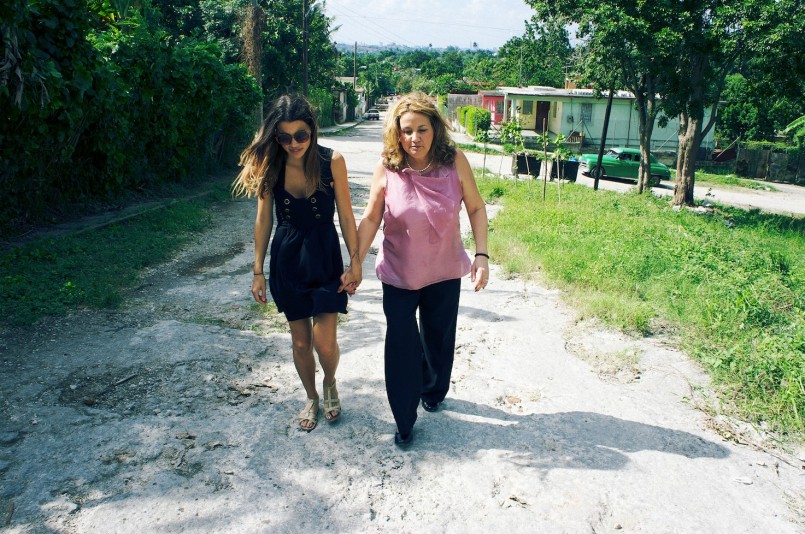 “Natalie and her mom on the street where her family lived before they fled the country.” / photo by Sean Mennie

If you want to go to Cuba, I want you to go. I do. But can I ask a favor? Be aware of what’s going on there. Try, if you can, to stay in people’s homes—casas particulares—instead of hotels. They’ll take much better care of you, the food will be much better, and you’ll be putting a little less money into Castro’s tourism pocket. When you go, ask the people to tell you what’s really going on…not the version they’re supposed to tell you. Things are changing in Cuba, and maybe instead of seeing it before the change, you can actually be a part of the change for the better. Also, for God’s sake, please don’t wear a fucking Che t-shirt. FL

Natalie Morales is a Cuban-American actor, writer, and filmmaker. For more on her career, read our Breaking profile.