Under The Influence: Andrew Bird

As he prepares to release his thirteenth record, the LA-based singer/songwriter tells us how Zach Galifianakis, family life, and tiny particles all played a role in the making of “Are You Serious.”
Menu

Under The Influence: Andrew Bird

As he prepares to release his thirteenth record, the LA-based singer/songwriter tells us how Zach Galifianakis, family life, and tiny particles all played a role in the making of “Are You Serious.”

For the last twenty years or so, there have been two halves of Andrew Bird floating through this world. There’s Andrew Bird the musician: a whimsical singer-songwriter/violinist who conjures up imaginative scenarios through witty lyrics and impressive whistling solos for sold-out crowds around the world. And there’s Andrew Bird the introvert: a new Los Angeles resident, husband to fashion designer Katherine Tsina, and father to committed Schoolhouse Rock! fan Sam. While both Birds intersected every once in a while, they generally existed in near-perfect harmony by not overlapping. But for his thirteenth record, the tightly wound and emotionally dense Are You Serious, it was time to bridge the gap and merge the two Birds once and for all.

“I have a lack of patience for my own imagination these days,” Bird says with a laugh. “You simply don’t have time to wallow in your own internal playground when starting a family and having a kid… I appreciate a little ambiguity in music, but at the same time, I just don’t have time to play around with words anymore.”

Any parent might read Bird’s remarks as (warranted) exhaustion due to late-night feedings and early morning wakeup calls, but the forty-two year old’s rigid rehearsal structure and steadfast commitment to carefully crafting Are You Serious confirm that he’s wide awake and ready to share his personal life with the world. The results of this shift are eleven cohesive songs that invite listeners to get to know the man better. To quote Bird himself from the album’s title track: “I’m gonna cut to the quick / This is all nonfiction / Words you beat with a stick / These are my true convictions.”

Musically, Are You Serious is warm and driving, allowing the heavier themes of aging (“Valleys of the Young,” “Saints Preservus”), modern love (“Left Handed Kisses,” “Roma Fade,” “Capsized”), and the fear of rejection and loss (“Puma,” “Truth Lies Low”) to pierce through the gauzy sonic pleasantries. Tackling these sobering subjects head-on was new territory for the musician, but letting down his defenses was something that Bird’s been ruminating on for a while. “Every time I covered a song or helped someone on their record I always thought, ‘Why can’t I do that? Why do I keep writing songs that get in the way of what I really want to say or the emotion that I really need to nail?’”

Here, Bird divulges how he overcame his mental roadblocks and answered his own questions while making this record, what inspired the final product of Are You Serious, and why he’d rather have his friend Zach Galifianakis open for him on tour than a band.

Andrew Bird: I wanted this to be a disciplined record—not just like a “Let’s go into the studio and hash the songs out” record. It was a really rigorous process and a lot of that has to do with the musicians; they raised the bar.

What I [admired about the classic studio group] The Wrecking Crew is that every part was really distinct; that’s why those songs worked so well. I always think about old-school records [when] everyone had arrangers, producers, and a division of labor behind each song—then Sinatra or Elvis would just walk in and sing the song. That was really hard to do when I was wearing all the hats. So, maybe in a sense, having more people in control and delegating allowed me to just walk in and be a little more like Sinatra. It was like I was covering a song, even though it was mine.

I think that the album’s title—Are You Serious—is really dealing with the issue of sincerity in music. There’s this need to really put it all out there, but that’s the one thing that I’ve never really been able to relate to. When I’d go to shows when I was living in Chicago, I’d see someone bleeding on the stage emotionally and I’d just think to myself, “Are you serious? You’re going to finish here, go to another town tomorrow night, and do the same thing? Can you really back this up?”

“Maybe in a sense, having more people in control and delegating allowed me to just walk in and be a little more like Sinatra.”

I feel more like a comedian when I’m onstage because I don’t want to bring all that darkness in. I often do shows with comedians because I relate to them more than other bands, especially in the way they address the audience. The song “Are You Serious” is directed to that issue—like, what if I came onstage, totally changed my persona, and I came out like Bono? [Laughs.] Just like high-fiving the front row! I never walk onstage thinking that I’ve got this worked out. And that’s where I really relate to that comedian posture because it never helps them—or me—to head out on stage and just think that I’m the shit.

When I perform with Zach [Galifianakis], I feel like I pick up some of his mannerisms. I feel myself talking to the audience more. Comedians do that confessional medium so well—they can be deep and personal and create a religious experience in a way. I’m way more interested in that than being up on stage like, “Here’s my pain.”

In “Truth Lies Low” I’m talking about how easy it is to humiliate yourself these days. Just with the click of a button, you could completely compromise yourself in minutes! You used to have to walk through the town and be yelled at by the elders, but now, the click of a button can bring it all crashing down. [Laughs.] And there’s something so enticing about that, thinking “I could totally fuck everything up right now. I can just hit send!” It’s so convenient.

[By the end of the track] I’m talking about Internet trolling to some degree. There are people out in the world who seek humiliation and some attention as a sign of life.  So, when I say, “At least they care enough to let you know,” I’m addressing those people’s internal thoughts. Like, at least there are people taking the time to actually call you a whore, you know? [Laughs.] Really uplifting stuff here!

Particles in the Air

“Puma” is based on actual events. The song starts with something that my wife said to me early on in our relationship. We were walking across Central Park and she was going to get some test results and they thought that something wasn’t quite right. She turned to me and said, “I’m afraid they’re going to tell me that I’m a girl and not a puma.” And I thought that was pretty awesome. It really made me love her more. I was just imagining these particles—you know when you can kind of see the actual molecules and dust that are static in the air?—unbeknownst to us, lacerating our bodies with subatomic particles. It’s about not wanting to be human and vulnerable to those things. 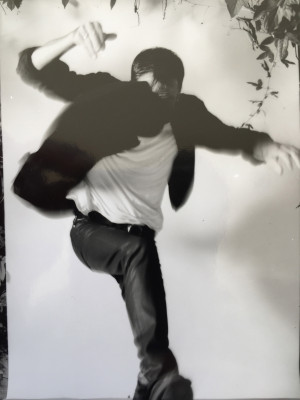 I love [the visual artist] John Baldessari, and [when I was working on Are You Serious’s cover art] I kept referencing him to the designer that I was collaborating with. I really like the way that humor often works in his pieces and how that could play off the album’s title. I was also drawn to the way that he used text in his art, which has always been a big thing for me, but it never crossed my mind that we’d actually get Baldessari to do the cover. I just wanted to nail the balance of humor and darkness and light for this album sleeve and my designer said that he had actually worked with Baldessari before. So, he got us a meeting, I went to [Baldessari’s] studio, sat down at his desk, and he told me to start talking. It was like a pitch meeting! I blabbed on about something even though he apparently had already decided to do it. He just wanted to watch me squirm. [Laughs.]

“Valleys of the Young” was definitely inspired by starting my family. You’ve got people on either side of this age precipice and they go from not wanting to look forward on one side of the divide to kind of hating people on the other side from two years before. There is a self-absorbed quality to starting a family. [This track is] just all about the disconnect between former friends.

I wanted to write the song in a way that wasn’t just like, “Oh, Andrew Bird grows up.” I wanted to make sure that my former self would have to pay attention to it as well. The lyrics are pretty plain spoken; I didn’t just want it to be for a certain group of people in a certain place [and time in their lives]. And that last part—“Now, you’re going on 64, driving down 65”—pushes “Valleys of the Young” further beyond “I hate that you’re having brunch when I’ve been up since five in the morning” and that kind of urbane stuff. There’s that part where it says that your heart is constantly breaking, and that sounds so bleak, but really there’s humor underneath that. In your twenties, you’re going from one heartbreak to another and it’s so dramatic, but really, you don’t even know! This is going to be the rest of your life. This little person that you create is going to keep your heart perpetually broken for the rest of your life. So the real drama is not in your twenties; it’s going to come later and you have to be ready for it. FL