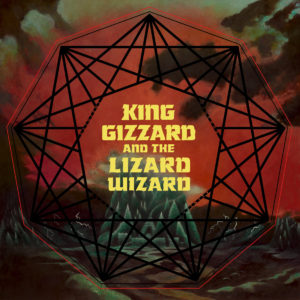 If the recent deaths of Bowie and Prince should remind us of anything, it’s that rock and roll’s truly greatest moments are based on massive, overblown gestures of purple pretense and Martian-spider excess. Such gestures, alas, are becoming rarer, perhaps the result of too much kale and gluten-free muffin consumption.

One might not think to look to the nations of Oceania for remedy. But Melbourne’s gloriously, preposterously monikered King Gizzard & the Lizard Wizard seem to have completely missed their sixth-form instruction on modesty and restraint—much to the delight of those who believe that laying down anything less than twenty-four guitar tracks per song makes you a minimalist.

KG&TLW obviously announce this all rather definitively purely by means of their titular grandiloquence. But their eighth full album since forming in 2011 (did we mention excess?) dwarfs the turgidity of the name. Indeed, the THC-laced-science-class album title alone could win them the Nobel Prize for Profuse Prog-ness.

So then, you’ll hardly be taken aback when the music contained within elevates the phrase “Like punk never happened” to an entirely new plateau. And indeed, this isn’t pale, watered down psychedelia. King Gizzard play it like they’ve just spatially tripped out in Epping Forest in 1973 and then sonically captured the results for posterity.

The speed rock of opener “Robot Stop” launches right into total overkill, announcing that the coming aural experience will involve the need to “fuck shit up.” Believe them. The equally hyper-speedy “Big Fig Wasp” follows, and it might just actually feature triple-tracked wah-wah. Whoa. “Evil Death Roll” is like Deep Purple’s “Highway Star,” but with the odometer tipping past 120 mph. Evil, indeed.

Unapologetic references to King Crimson and Gabriel-era Genesis abound—meaning generous use of synched-up-guitar-organ-vocal riffing. But it’s all played with the anxiety and ferocity of Black Sabbath after a visit to the local crank dispensary, and it’s topped off with stream of consciousness, quasi sci-fi lyrics. It relents only briefly, when freakazoid album closer “Road Train” actually disappears…and then does an honest-to-Gandalf “fade in” jam that seamlessly loops right back to the beginning of the record.