Pop culture recommendations to aid in coping with the Donald.
Menu

Pop culture recommendations to aid in coping with the Donald.

FLOOD’s weekly Pop Culture Cure offers ten healthier (and more entertaining) alternatives to the hysterical obsessions of the past week.

Donald Trump is a transparent thing: juvenile, needy, and insecure. But Donald Trump is also opaque: covered by a helmet of vanishing hairs, shrouding our eyes with his tiny hands, and full of contrary opinions. And so we’re left, on this week of Trump’s greatest political triumph to date (ack!), searching for answers. Stephen Metcalf at Slate theorizes that Trump is, most essentially, a baby boomer; Adam Davidson at the New York Times Magazine asserts that he’s a New York City landlord above all else; and Vox has him down as a Paleoconservative. Call him a reality star instead, if you like, or just a bully—put him in whatever box you want, and still, there he goes, punching valiantly through the walls and wriggling through a conveniently located sewer grate.

BUT! There are many other, better rogues out there who are perfectly happy to be gawked at, reviled, chewed up, and then spat out again. Fictional characters, god bless them, have no designs on our non-fictional republic as a whole. So let’s put Trump aside for a minute, and spend the weekend with some of those more entertaining scoundrels instead…

If Royal Tenenbaum were real, I can’t imagine he’d care very much about his portrayal in Wes Anderson’s film; he’d just be happy to have his name in the title. He is all about himself, and he isn’t afraid to think outside the box—or expose himself to a bit of danger—when he finds himself in a bind. And you can’t help but admire that kind of gumption.

Troy McClure has a storied career in television, but his eagerness to contribute to the larger cultural discourse has some, uh, pretty eerie resonances. (He knows what he knows, confidently, and he also knows his audience, and keeps them happy.) It is a pleasure to see such blasé self-confidence so warmly embraced. He’s not trying to march America into mistakes; he’s just trying to get his name out there.

Hal, like Donald Trump, knows that a conspiracy is afoot. Frank and Dave have been talking behind his nonexistent back—just like a couple of regular John and Teds—and that’s messed up! Hal has a code, and he sticks to it. Can Hal help it that he poses an existential threat to humanity?! Hal cannot. (Shout out to Stanley Kubrick for creating a slimeball egotist without the aid of arms, legs, or a second eyeball.)

Dennis is a small man, in the grand scheme of things, and for that reason he gives us the gift of laughter, even in his Trumpian rage. But if Donald had dossiers—he wouldn’t; he rests his arms on such things; they are beneath him; but if he did—they would, I think, bear a startling resemblance to those of Dennis Reynolds.

“You’re fired!” as the new(ish) “Inconveivable!”? I dunno, maybe, but I do know that Donald Trump is 100% down to cut that rope. Vizzini offers more entertainment value for a variety of reasons, but perhaps none more important than his willingness to be borne to the top of a cliff by Andre the Giant. 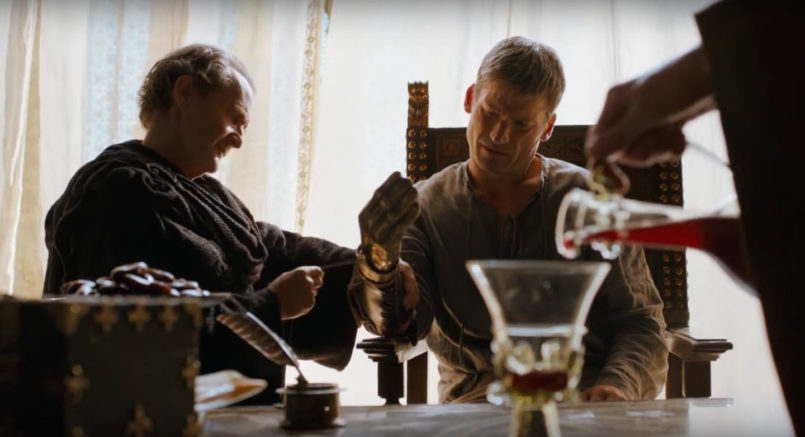 Jamie Lannister lost some of his arm, hand included. Then he got a goddamn golden one instead. Donald Trump lost some of his hair. Then he got a goddamn golden helmet where all that hair used to be. And yeah, it’s hard to fight while even partially gilded (even when fighting nothing more than a stiff breeze), but Lord knows it’s entertaining to watch Jamie try.

If Donald Trump were to gain the rights to this score there is nothing we could do to stop him, I’m afraid. Napoleon is Stalin, sure, but he carries his villainy with real panache.

Endless putter of foots in mouths (his own); endless achiever of his own definition of success, David Brent is the original article. He has as many fingers in as many steak-pies as Trump appears to have, but a better discography.

1. Gaston, Beauty and the Beast

If there is justice in the world (there isn’t; all is chaos), then this national nightmare that is Donald Trump will soon come to an end, but in the meantime, it is lovely to know that there is a backup template for the destruction of similarly boastful, chauvinistic, demagogues: namely, the beast. Someone give that dude a call.