Pop culture recommendations to aid with your justified sense of inadequacy.
Menu

Pop culture recommendations to aid with your justified sense of inadequacy.

FLOOD’s weekly Pop Culture Cure offers an antidote—or ten—to the most upsetting developments of the past week. (Because therapy is expensive, medicine is bitter, and entertainment is best.)

You know what really burns me up? Other people, man. Especially the successful ones. And you know what’s even worse than your average workaday successes (beeper kings, spelling bee champs, competitive eating icons)? Famously successful people. It’s them what really chunks my bile. Because when is enough enough, Channing… Aubrey… Mindy…? If you’ve had success at one thing, that should be it. But it never is.

Louis C.K. is this week’s case in point. He may play a mad-dad sad-sack on TV, but don’t let that act fool you. The man is revered as a comedian, beloved as an FX property, and not at all bad at making money. But this past week, he went full bang-bang on our global awards and honors supply when he became a Celebrity Jeopardy champion. This is simply too much to bear. If Louis C.K. will leave us absolutely nothing, then let’s stop even trying; let’s seek instead to find some greater sense of peace with ourselves… By which I mean, let’s take a minute to look down on those who have fallen as short of their dreams as we have of ours. Cue the existential blooper reel!

There are any number of Coen Brothers characters whose utterly prosaic dreams have led them to very bad ends indeed, but Jerry Lundegaard’s journey from mild ambition to spectacular, even cosmic disappointment really does stand out. His spirit has risen again on FX, but he carries that stench of death with him wherever he goes. That’s just the way with some people.

9. George Bailey in It’s a Wonderful Life (prior to the climax)

It’s a Wonderful Life has a certain reputation as a cloying, facile entertainment; but take away the divine intervention at the end and what you’ve got is a movie about a man who gives and gives and gives, who never achieves either the success or the career he really wanted, and who decides to kill himself in order to pay his family’s bills. So it’s nice that Clarence pops in and everything (whatever), but my favorite part is still when the then unredeemed George Bailey literally smashes his dreams to pieces as a last, petty gesture of revenge. So he may be living his wonderful life now, but he wasn’t always.

8. Terry Malloy in On the Waterfront

Robert DeNiro could never have done it better if Marlon Brando hadn’t done it best first. His performance of an embittered, troubled failure—and the iconic line: “I coulda been a contender”—swallowed up the Willy Loman prototype and replaced it with something much more specific, urgent, and powerful. If you want to feel good about not having been sold out by your older sibling, this is the only proper choice.

I like to think of rap battles as a kind of annual performance review, just on a grander stage. One rapper goes in and says, “Yeah, hey, I think I’ve had a really great year. I think I might even be the best rapper alive at this point!” And then the guy across the table says something to the effect of “You a fan, a phony, a fake, a pussy, a Stan / I still whip your ass; you thirty-six in a karate class?” (if that particular employee happens to be Nas), or “I don’t care if you Mobb Deep, I hold triggers to crews / You little fuck, I got money stacks bigger than you!” (if that particular employee happens to be Jay Z). It’s all just part of a longer negotiation, and no one will ever be totally happy with the outcome, but hey, you have to respect the process. 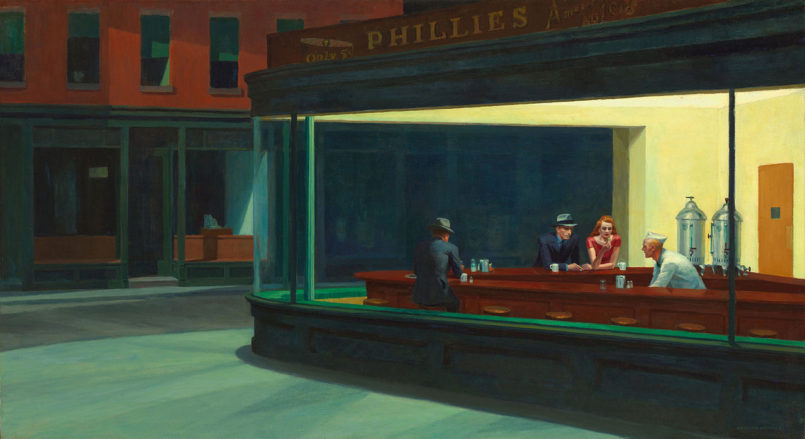 6. The nighthawks in Edward Hopper’s “Nighthawks”

I don’t really know what these here nighthawks wanted to do with their lives back when they were kids, but I do know that if they wanted to find a way to subdue their inner demons and quiet their internalized wails of despair, a bare-walled diner that serves no food underneath the glare of thousand-watt lightbulbs was probably a bad bet. So this is more of a public warning for those dealing with self-recrimination and self-doubt: we should all pick darker diners.

5. Everyone in the Red Riding trilogy (but especially the good people)

Red Riding is thrilling entertainment in much the same way that Game of Thrones is: everything has incredibly high stakes (live or die, fight or flee, save or kill) and almost everything ends in destruction. Red Riding feels much more like you’re watching real life, even as you have the rug ripped out from under you time and time again (and then are beaten with it, to the point of death, and rolled up in it, and tossed into a dirty river, never to be mourned or missed—metaphorically speaking). Still, if you want to feel like there are worse things you could have done with yourself, trying to untangle a web of corruption in 1980’s Yorkshire is a good point of comparison.

Charles Manson: very successful in terms of achieving fame by the most debased and horrific means imaginable; very unsuccessful in terms of achieving fame via his first love, the art of song. As has been documented many times now (including via the incredibly compelling history podcast You Must Remember This, from Karina Longworth), young Charlie Manson did everything he possibly could to make it big in the music biz. The one thing he could not do, however, was write or perform a good song.

3. Tommy Wiseau in The Room

Tommy Wiseau made a movie whose sole purpose seemed to be proving that Tommy Wiseau could make a dramatic and, uh, darkly comic (?) movie about normal-seeming people. Nothing about it works or makes any sense, but the attempts at realistically representing human greeting practices in contemporary America remains perhaps the single most poignant, profound, and invigorating failure I have ever seen. It is the filmic version of someone failing to sign their name correctly on a test.

This is peak Kermit, just sittin’ on his log and strummin’ his little rainbow ditty. And sure, it’s a melancholy tune, but so is Kermit, and it seems to make him happy. Uniquely happy, in fact. And that’s weird, because this, of course, is from a little film called The Muppet Movie, and this scene is noteworthy for its lack of other muppets. There is none of the usual chaos, none of the manic drumming, none of the drama. There is just Kermit, and Kermit is happy, because Kermit just wants Kermit, really. But so does everyone else. His life is a waking nightmare, and he is, above all other puppets, accursed.

1. Louis C.K. in Comedians in Cars Getting Coffee

So back to Mr. C.K. He may have wealth, he may have fame, and he may be on a boat, on occasion, but he is also a parent. And let us not lose sight of that. No success is permanent, no joy is eternal, and the wheel of fortune turns again. Some days you drive the boat, and some days the boat drives you. The tugboat I mean.