The Death Cure: A Return to the Days When Killing Your Darlings Was Still a Power Move

Pop cultural deaths that occurred back before death was cool.
Menu

Art & CultureFilm + TVStaff Picks
The Death Cure: A Return to the Days When Killing Your Darlings Was Still a Power Move

Pop cultural deaths that occurred back before death was cool.

FLOOD’s weekly Pop Culture Cure offers an antidote—or ten—to the most upsetting developments of the past week. (Because therapy’s expensive, and entertainment’s fun.)

Todd VanDerWerff has a great piece up on Vox right now about how TV’s current reliance on death is killing entertainment. The case is extremely convincing, and it has charts—or chart, rather. But you don’t need a chart to know that dead is the new black. That if you haven’t been Ned Stark’ed then you haven’t really lived. That we are all Cabot Covers now.

This embrace of destruction reeks of nihilism, and neither I nor Jeffrey Lebowski is havin’ any of that. So come with me now on a journey through time and space; let’s retreat to the years before the zombie apocalypse trend, when Death was only just beginning to find his way in the entertainment business. That guy might not have been a ton of fun—lurking around the lot after hours, as he did, and showing up uninvited to parties in the hills—but at least he was real. (Not like that asshole who now drives drunkenly around town with his buddy Bronson Pinchot.) This list is an attempt to return Death to his rightful, doleful place.

This, this right here, this is some shit. I don’t care how old you are. Orphans are one thing, but deer orphans are the proverbial Nother Thing. Deer orphans, let me remind you, are what happens when deer parents (nature lovers who love nothing more than romping in nature with their deer sons) are HUNTED DOWN BY AMBIENT MAN, and deer orphans show that Mr. Walt Disney was all too willing to kill anything to make a buck. (For all we know, he was the hunter in Bambi.) But Bambi isn’t Bambi without Mother, so I guess Walt knew what he was doing. When it came to his darlings and the killing of the same, he knew when to hold them, knew when to fold them, knew when to walk away, knew when to…run Bambi…to the thicket Bambi…run Bambi…ruhuhuhuhnnnnnnnnnn.

PS: All Disney movies will be streaming on Netflix as of September. Good news?

9. Omar in The Wire (via kid in a corner store)

It’s not like every death in pop culture has to offer a true reckoning with what it means to be human, but I don’t think it’s necessarily a problem if a few of them do. Omar dies because of something, sure, but the utter inadequacy of his death versus what he stood for and what he had escaped to that point felt cosmically unequal. It feels like watching Wyatt Earp emerge from the gunfight at the OK Corral and then slip on a banana peel and brain himself on a step. WHAT IS A BANANA PEEL DOING IN ARIZONA IN THE 1880s! HOW ROTTEN MUST THAT BANANA HAVE BEEEN WITHOUT THE AID OF REFRIGERATION!?

But death is that banana peel. It’s unbelievable, but there it is.

8. Marion Crane in Psycho (via psycho)

Once upon a time, Janet Leigh was a star. Twice upon a time, stars didn’t get killed off in movies that they headlined. And then Psycho happened. And that was kind of it for Janet Leigh (The Manchurian Candidate and Bye Bye Birdie premiered just a few years later, but then again, so did Night of the Lepus); and that was definitely it for audience expectations. Psycho still pulls the rug from under our feet even fifty-plus years later because, unlike most horror movies, it invests its sacrificial lamb with a backstory all her own. The movie about her almost accidental theft is a movie that I definitely want to see, but when offered the choice of two movies, one called “Embezzler” and the other called “Psycho,” the choice is not hard. Hitchcock, as usual, chose wisely. But it’s more than just a name; Psycho lives on through the vitality of its characters just as much as it benefits from their (admittedly iconic) deaths.

7. Judy Barton in Vertigo (via the past)

More Hitchcock here because that man knew a thing or twelve about death as entertainment. Psycho presages the current trend for surprising deaths, but Vertigo, from two years earlier, feels like the more enduring treatment. Here, death is timeless. It is before us, with us, after us. We are haunted by ourselves and by the ghosts we ourselves have made. But Hitchcock still finds a way to take that sense of suspense, that sense of death in the shadows, deaths of the mind, and make it utterly shocking in the film’s climax. And that’s the way it goes for us as well. Death may be a certainty, but it comes as a shock. 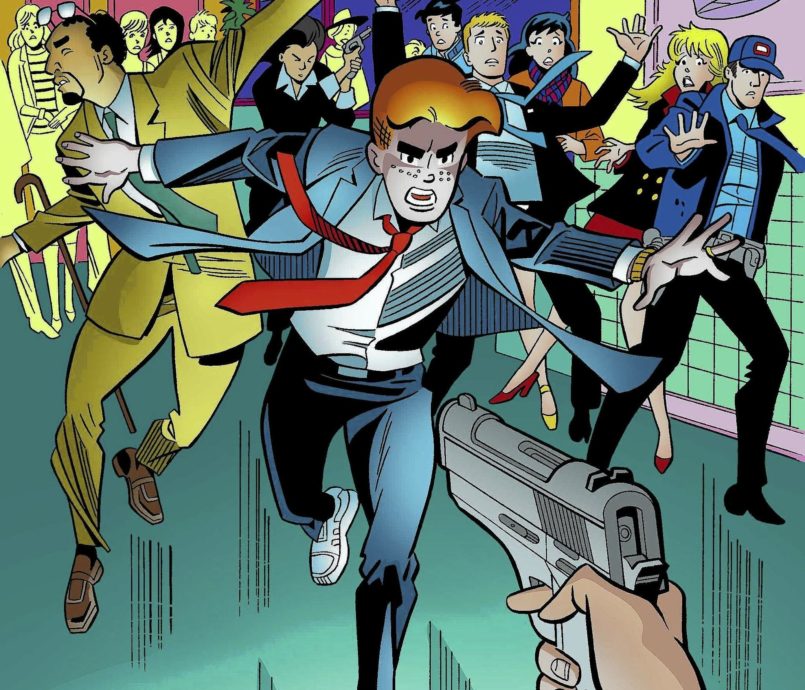 The rules are different in comic books. Universes combine and separate and people die and live again without much adherence to a larger scheme, but the Archie comics took a more respectable route to gimmickry with their death of Archie (part of a much larger and very successful attempt to update and rebrand Archie for a new generation). In Life with Archie #36, the parallel universe idea (implicit in so many superhero comics) is used to give Archie fans what they want—a resolution to the enduring Archie/Betty/Veronica love triangle—without alienating anyone. That is to say, Archie marries Betty in one universe and Veronica in the other, but in this issue, it all amounts to the same thing: a hill of beans (where beans are dirt because Archie gets shot dead and is then presumably buried).

This is really more of a straight endorsement. Read Eddie Coyle the book. Watch Eddie Coyle the movie. You should do it because you will enjoy yourself, because this is what crime dialogue would sound like if it was written by God, if God were a shabby criminal. You should also enjoy Eddie’s story because death comes for Eddie as it comes for us all (just with maybe a bit more hockey in the background in his case). 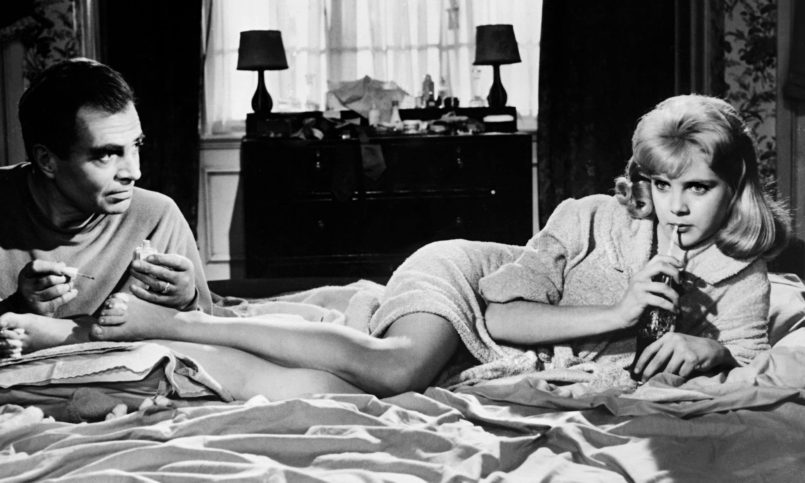 4. Charlotte Haze in Lolita (via car)

Death is a powerful tool in fiction, as noted above (and throughout), but it’s important to step back on occasion and realize that “fiction” is not just a thing that we read on the beach. It’s also a thing we ourselves indulge in when, say, the person ahead of us in a grocery line invades our personal space to obtain a pack of Rolos and then makes endless small talk with the cashier. We might think, on that occasion, “Oh, why yes, I wish this person were dead instead of here right now. That would solve just about everything.” And same thing when we watch whichever sigil-sucker has just made the latest rape-for-power play on GoT. We enjoy the fiction of death. Nabokov, the meta-man himself, knows a lot about this kind of enjoyment, which is exactly what makes Charlotte Haze’s death so unnerving. Humbert wants her dead. We want her dead. And then she is dead.

Oh god. I don’t know where the line is exactly between exploitation and art, but god damn it if this is not sitting right on top of that line. If you weren’t sure about how much you hated union-busters in Calumet Michigan in 1913, this will certainly help push you over the edge. This song has not one ounce of the proverbial chill, but it does have one of the most poignant repeated lines I have ever heard.

“Keep on with your party, there’s no such a thing.” Oh god. 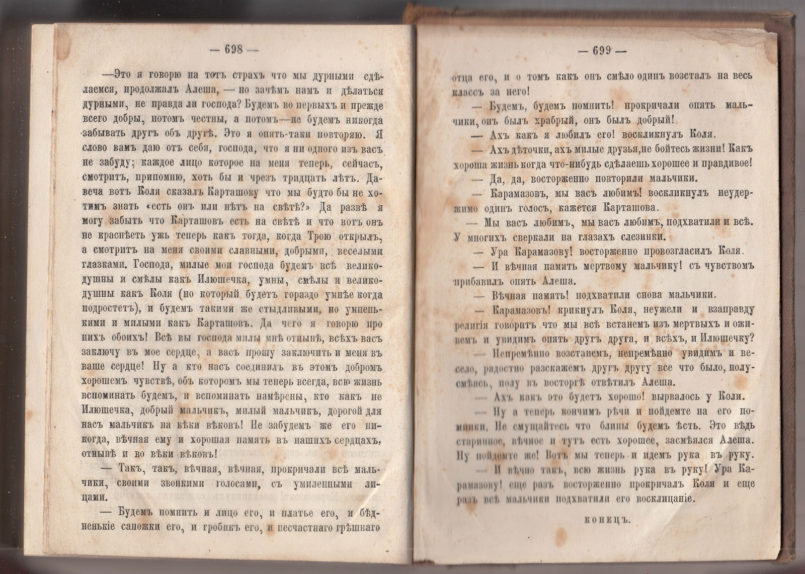 2. Fyodor Karamazov in The Brothers Karamazov (via brother from another mother)

Speaking of a lack of chill, I want to talk Russian novels for a second. Dostoevsky is one of those guys whose reputations make it kind of hard to think of them as “fun.” And the Dos was a great artist, I grant you, but he was also not afraid of a ruble and the making of the same. So the entertainment value is almost always (almost!) keeping pace with the profundity and the beauty. Crime and Punishment is the great example of this, but Brothers Karamazov should not be forgotten. It also centers on a mystery (who killed Fyodor Karamazov) and features a murder scene that in some ways even exceeds Crime and Punishment’s. There, the scene was horrible because we were powerless to stop the ostensible hero from making a horrible mistake; here, at the exact midpoint of a book about the tension between certainty and doubt (in a chapter called “In the Dark”), we see everything, right up to the point when Fyodor leans out his window, when his son Dmitri raises his pestle, and “…”

1. The Alien in Alien (via oh the humanity)

That alien was literally born to be a perfect killing machine, so it seems kind of unfair to begrudge it for doing its job. Plus, it had real grit, real gumption. Anyway, I think it’s too bad that it had to die is all. So sue me.