LA’s latest architectural gem is more than just a home for Warhol, Basquiat, Koons, and Johns. It’s also a valuable member of a growing Downtown community.

BACKSTORY: Billionaire philanthropists Eli and Edythe Broad’s new cutting-edge museum housing their preeminent collection of postwar and contemporary art
WHERE: Downtown Los Angeles
YOU MIGHT KNOW IT AS: The ivory colored, honeycomb-veiled structure across the street from the Walt Disney Concert Hall on a thriving stretch of Grand Avenue
NOW: The 120,000-square-foot, $140 million building is open for free to the public six days a week and set to debut its first special exhibition, Cindy Sherman: Imitation of Life on June 11 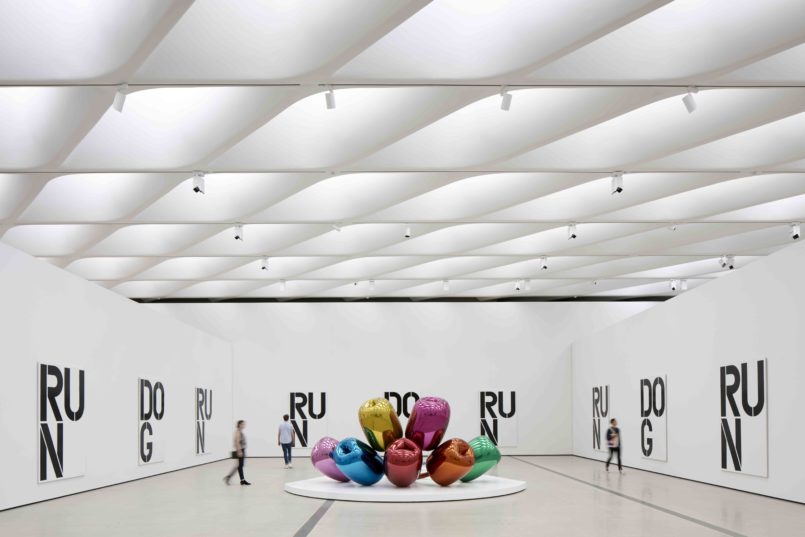 Up until a few years ago, on any given night or weekend, Downtown Los Angeles was something of a ghost town. Unlike most urban areas, LA’s heartbeat has never been centrally located, which means the nation’s second biggest city has always been lacking a true hub for its sprawl.

Yet, thanks in large part to the vision and commitment of billionaire philanthropists Eli and Edythe Broad (rhymes with “road”), today the area is a thriving hotspot, and a visit to Southern California is not complete without a trip to the new jewel in the downtown crown: the couple’s innovative contemporary art museum, The Broad.

The Broad houses one of the world’s most prominent collections of postwar and contemporary art, an adventurous and zestfully selected accumulation built over decades by diligent research and Eli and Edythe’s nurturing hands. Along with their longtime curator, Joanne Heyler, who acts as the museum’s Founding Director, The Broad Art Foundation spent years making loans and sponsoring wings and buildings in existing museums. When they decided to build a headquarters of their own, Heyler was tasked with turning the private collection into a public space.

“My hope is that visitors who come to the museum feel that they can indulge in their curiosity on an incidental basis, ask any question about the artwork, and get an informed answer.” — The Broad curator Joanne Heyler.

“Even before a museum was in the planning stages, we were lending out the works all over the world, so the collection has always had a public life and a public purpose,” Heyler says. “In that sense, it’s always been a dream job for a curator, because you avoid the bureaucracy that tends to come up in the larger institutions. But you are also fulfilling a public purpose. It has never been a private collection for the Broads’ personal enjoyment.”

“There’s no other gallery in Southern California where you’re going to find a concise view of Warhol’s and Lichtenstein’s productions in the ’60s like you’ll find here,” Heyler says. “Partly because the collection has been in development for so long and partly because of the way the Broads always prefer to collect—which is like other museums in the sense of the pursuit of quality, but also in pursuit of depth—that offers us at The Broad an opportunity to show our visitors a pretty deep slice of an artist’s career.” 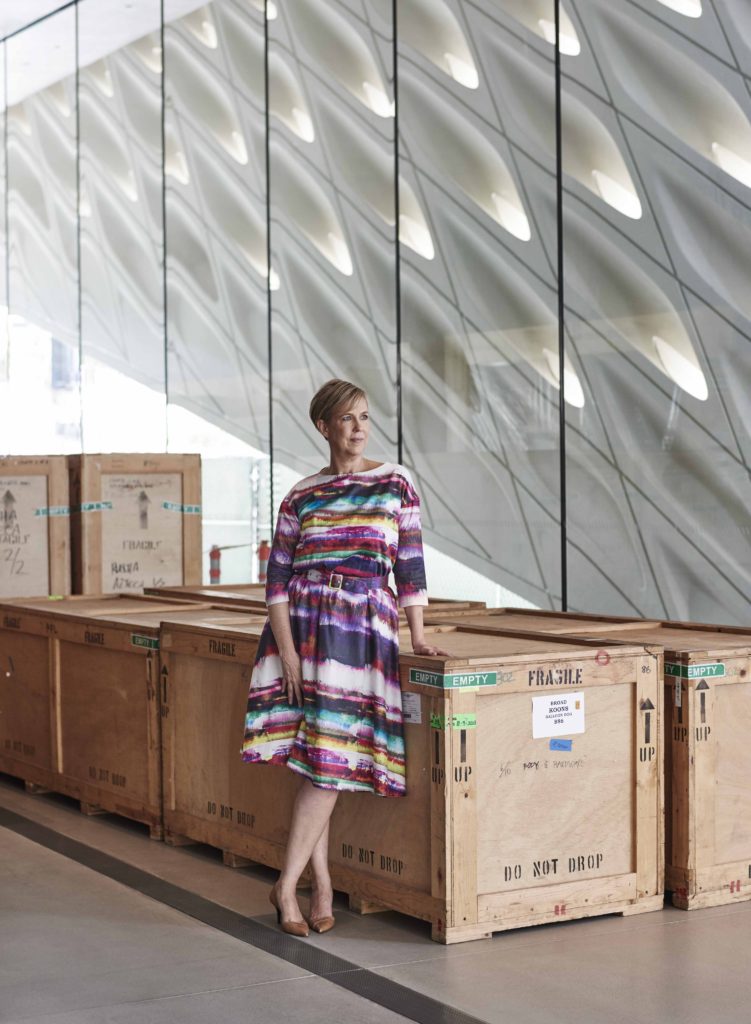 The public has answered the call, as crowds flock daily in droves, drawn not only by the art but by performance pieces, music and lecture events, and even visiting-celebrity selfies. Recently, Adele taped a video performance of her song “When We Were Young” inside Yayoi Kusama’s Infinity Mirrored Room after seeing a Broad-tagged Instagram photo posted by an enamored Katy Perry. To date, about 550,000 guests have visited, and the free-entry reservations are fully booked through early spring. And whether entrants reserve in advance or simply wait out the day-of standby line, Heyler’s well-educated staff is there to greet them.

“My hope is that visitors who come to the museum feel that they can indulge in their curiosity on an incidental basis, ask any question about the artwork, and get an informed answer,” Heyler says.

While it’s her wish that each visitor feels that sense of welcomed interaction and education, it seems the bigger-picture dream of the museum’s namesakes is measuring up as well.

“The Broads are very excited to see so much of the collection gathered together in one installation,” Heyler says. “That’s never been possible before. But I’ll tell you what Eli and Edye are most thrilled about is that the museum has met the number one goal they set for it, which is to connect a wide audience with contemporary art. They enjoy watching people enjoy what they’ve had such a passion for throughout so many decades as collectors. Also, to see a young audience, and one that’s reflective of Los Angeles, and to see so much life in Downtown LA, specifically on Grand Avenue… All of those have been goals that Eli has not been shy about in the years leading up to the museum, so I think he’s thrilled to actually see it come to fruition. The Broads are very public-spirited people, so the public embrace [of] this museum is incredibly meaningful to them.” FL