The Championship Cure: Because There’s More to Life Than Winning

Pop cultural reminders that you don’t need a million-karat ring to feel like a million damn bucks.
Menu

Pop cultural reminders that you don’t need a million-karat ring to feel like a million damn bucks.

FLOOD’s weekly Pop Culture Cure offers an antidote—or five—to the most upsetting developments of the past week. (Because therapy’s expensive, and entertainment’s not.)

One thing I know for a fact is that Bay’s English Muffins are better than Thomas’s English Muffins. That’s fact number one. But fact number two is that sports in America are very popular. These two facts are not related, but they are profound truths, and they bear repeating: call Bay for your muffins and sports for a good time. Bay’s makes a lot of sense. They taste better and they don’t require a knife. But sports are harder to account for. They have few nooks, fewer crannies, and they tend to be very, very, very very, very, very, very… uh, problematic. Also, they’re just kind of weird.

To give just one example, the NBA and NHL championships are both taking place this week, and both of these events seek to proclaim a group of athletes as “the best in the world.” That is literally not a thing that anyone will ever say about me, or anyone I know/have ever known. And yet for these dudes it is a yearly goal. But before we get all hang-doggy about our collective lack of ambition, let me just take a moment to point out that it’s the athletes who are the weirdos in this scenario, not us. Sure, we may not ever be the champions, but that doesn’t mean that we don’t count. There’s glory in mundanity, too. Let us count the ways.

There are a lot of good movies about food (and I say that having studiously avoided Chocolat for lo these past fifteen years), but I don’t think there’s a better one than this lovely little Ang Lee joint. All Chef Chu wants to do is share one nice meal a week with his beloved daughters. All his daughters want to do is get on with their lives. This extremely familiar conflict is played out across multiple romance plots and of course the family table, and at no point will you ever be reminded of Love Actually. As far as prosaic realities go, brown-bag lunches are pretty archetypal, but here they feel sublime. — Daniel Harmon

He’s only accepting this particular honorific so he doesn’t get fined. But that doesn’t change how apt it is. There have been plenty of musicians, comedians, and filmmakers who’ve made their careers on your not knowing how you’re supposed to interpret them (and don’t even get us started on Chris Gaines), but they all operate in arenas in which artifice is assumed—it ain’t Kurt Cobain’s fault that corporate magazines still suck. Lynch gets the nod for going beast mode on our most self-serious of entertainment industries, and for doing so ahead of our holiest of days. Plus, you know, pro athletes really shouldn’t be eating Skittles. — Marty Sartini Garner 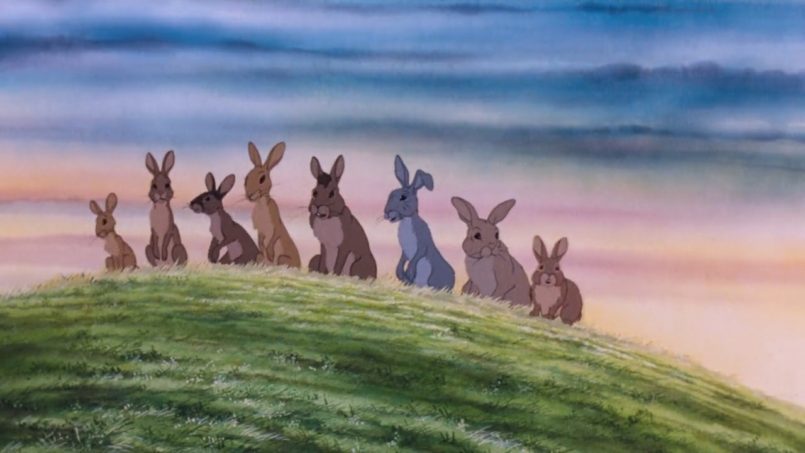 via Kyle on Film

Champion of bedtime stories: Richard Adams, author of Watership Down

As a new parent, one thing I have discovered is that it is not easy to create compelling content for a fickle audience of non-adults. A fly on the wall of my child’s bedroom (begone, skeezy pest!) would hear me butcher the lyrics to Jackson Browne’s “For a Dancer,” fail to remember what the first course at Froggie’s wedding is, and then beg my child to let go of my chest hairs. My performance, in other words, does not have the makings of a classic work of literature. But Richard Adams created just that, a dark and profound and beautiful novel about rabbits, after his very own children asked him to tell them more about the bedtime stories that he was making up on the fly (a different fly, don’t worry). Crazy, man. The movie’s pretty good, but the book’s way better. Get thee to the warren. — DH

Yeah, sure, they came bursting out of Sacto with a DJ and a frosted-tip rapper/singer in shell-toe Adidas and a misspelled name, but Deftones stuck all that up their proverbial yeah while Jonathan Davis was still trying to figure out how to make the backwards R on his keyboard. While Rome (New York) burned with the dumbness of their former Family Values tourmates, Chino Moreno’s group was mining old My Bloody Valentine and Cure records for textures. The pink migraine smear of 2000’s White Pony remains one of the most underappreciated albums of the Willennium, while 2003’s Deftones detonated the opening blasts of the crater Deafheaven would eventually sculpt in their own image. They’re still hewing, too, with this year’s Gore. A Rammstein album with that title would refer to their live show, and a RATM one to the Internet’s Al, but knowing Moreno’s penchant for darkwave—and the album’s heavily textured brooding—it seems like a nod toward Depeche Mode’s Martin. — MSG

A holiday for the people and the rodents alike. And a hero for us all.

I mean obviously. This is just a reminder. — DH